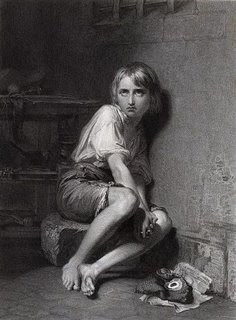 During the French Revolution, the Royal Family was imprisoned in the Temple. After his father’s execution, little Louis Charles, who was only 8 years old, was dragged away from his mother’s arms. He was then abused, beaten, often woken up in the night to deprive him of sleep and given alcohol to force him to accuse his mother and aunt of incest. After the fall of Robespierre, the French people started to become concerned again with the fate of the two orphans in the Temple (his sister Marie-Therese was still imprisoned there too but the two children were kept in separate rooms and forbidden to meet). J. B. Harmand, together with Reverchon and Mathieu went to visit the child in the Temple Prison in early 1795. Herman wrote down his account of the visit. Let’s listen to him.

“We arrived at the door, the bolts of which confined the innocent, the only son of our King — our King himself. — The key turned with a grating noise in the lock, and on the door being opened, we discovered a small ante-room, perfectly clean, with no other article of furniture in it but an earthenware stove, communicating, by an opening in the wall, with the adjoining room, and which stove could be lighted only in the ante-room. The commissaries observed to us that this precaution had been taken, in order not to leave a fire in the power of a child.”

Adjoining that room was Louis Charles’ chamber, which contained his bed. They unlocked the door and found the child “sitting near a small square table, on which were scattered a number of playing cards, some turned up into the shapes of trunks and boxes, and others raised into houses. He was occupied with these cards when we entered, and did not leave off his play. He had on a sailor’s dress, new, and made of slate-coloured cloth; his head was uncovered; and the room was clean and well lighted. The bed was a small wooden one, without curtains, and the bedding linen seemed to us to be good and of a fine quality. The bed was behind the door, on the left hand on going in; and farther, on the same side, was another bedstead, without bedding, placed at the foot of the first. Between them was a door, which was shut, leading into another apartment which we did not see. The commissaries told us that the second bed had been that of the shoemaker Simon.”

Now, Harmand “approached the Prince; but our motions did not appear to make any impression upon him. I told him that the government — informed too late of the bad state of his health, and of his refusal to take exercise, or to answer the questions put to him upon that subject, as well as his rejecting the proposals made to him to take some remedies, and to receive the visit of a physician — had sent us to him to ascertain these facts, and, in its name, to renew all those proposals; that we hoped they would be agreeable to him, but that we should take upon ourselves to offer him advice, and even to add reproaches, if he should persist in remaining silent, and in not taking exercise; that we were authorised to offer him such objects of diversion or recreation as he might desire; and that I requested he would tell me whether that pleased him. Whilst I was thus addressing him, he looked at me steadfastly, without any change of position, and he listened to me apparently with the greatest attention; but not one word in reply.”

Harmand though Louis-Charles hadn’t understood him and repeated his proposal: “I have perhaps explained myself badly, or perhaps you have not understood me, sir: I have the honour to ask whether you wish for a horse, a dog, birds, toys of any kind what soever; or one or more companions of your own age, whom we will present to you previously to their being permanently attached to you; will you, at the present moment, go down into the garden, or ascend the turrets? Do you wish for sweetmeats, cakes, &c.?” Again, Louis Charles didn’t utter a word in reply. He didn’t move either, but simply looked at Hebert with a look of utter indifference. 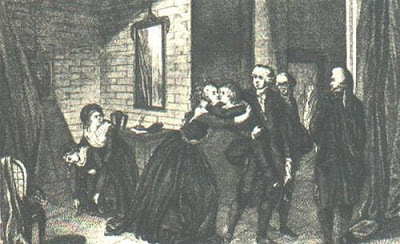 “I then took upon me to assume a more decided tone, and I ventured to say to him, “Sir, so much obstinacy at your age is a fault that nothing can excuse: it is the more surprising, since our visit, as you must perceive, has for its object the affording some relief to your situation, some attentions and succours to your health; how can we attain this object, if you persist in refusing to answer, and to say what is agreeable to you? Is there any other way of making the proposal? have the goodness to state it, and we shall adopt it.”

Still the same fixed look and the same attention, but not a word. I resumed:

“If your refusal to speak, sir, involved none but yourself, we would wait, not without pain, but with more patience, until you might be pleased to speak, as we must conclude that your situation is less displeasing to you than we imagined, since you will not change it: but you do not belong to yourself; all those about you are responsible for your person and your condition: do you wish that we ourselves should be blamed? For what answer can we give to the government, of which we are only the delegates? Have the goodness to answer me, I entreat you, or we must finish by commanding you.”

Not a word, and always the same fixedness. I was in despair, as well as my colleagues: that look had especially so strong a feature of resignation and indifference, that it seemed to say, what does it matter to me? despatch your victim.”

Harmand couldn’t bear it anymore. He was now on the point of tears and started pacing the room to compose himself. Once recovered, he “resolved to try the effect of a tone of command. I tried it accordingly, placing myself close on the Prince’s right hand, and saying to him, “Give me your hand.” He gave it me; and, extending mine up to his arm-pit, I felt a swelling at the wrist, and one at the elbow. It seems that these swellings were not painful, for the Prince gave no sign of their being so. “The other hand:” he gave it me likewise: but there was nothing. “Allow me also to touch your legs and knees.” He rose; and I found the same swellings under both knees.

In this position, the young Prince had the appearance of rickets, and a bad formation: his legs and thighs were long and thin, his chest raised, his shoulders high and narrow; his head was in every respect finely formed and beautiful; his complexion clear, but without colour; his hair long and handsome, well kept, and of a light chesnut colour. “Now have the goodness to walk.” He did so immediately, going towards the door, and returning at once to his seat.

“Do you think, sir, that that is exercise? And do you not perceive, on the contrary, that this apathy is alone the cause of your ill-health, and of the disorders with which you are threatened? Pray believe in our experience and regard for you: you cannot hope to recover your health but by attending to our proposals and advice. We will send you a physician, and we trust that you will consent to answer him; at least make us a sign that it will not be disagreeable to you.”

“Be so good, sir, as to walk again, and for a little longer time.” 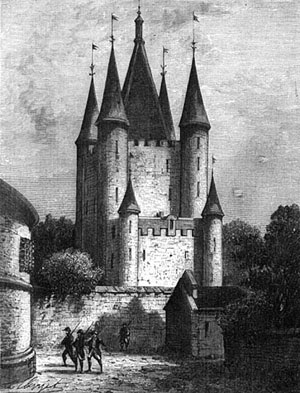 This time, Louis Charles refused to obey and remained on his seat. Harmard and his colleagues, looking at each other in amazement, were about to exchange their opinions and reflections when  Louis Charles’ dinner was brought: “a porringer of red earthen-ware contained a black soup, on the top of which floated a few lentils; and on a plate of the same material lay a small bit of boiled meat, also black and shrivelled, the bad quality of which was sufficiently apparent. There was a second plate of lentils; and a third, in which were six chesnuts, rather burnt than roasted; a pewter fork, but no knife. The commissaries told us that this was by order of the council of the commune: and there was no wine.”

The little prisoner started eating his dinner, while Harmand and his colleagues left the room and expressed their indignation about this poor and unhealthy diet and gave orders to improve his dinner, and give him some fruit. Harmand also ordered that some grapes, although scarce at that period, should be procured for the child. “Having given these orders, we went back into the room, and found that he had eaten every thing. I asked him whether he was satisfied with his dinner?

Whether he wished for some fruit?

Whether he liked grapes?

Shortly after the grapes were brought; they were placed on the table, and he eat them without speaking.

Do you wish for more?

We could then no longer doubt that every effort on our part to induce him to speak would be useless. I told him the conclusion we had come to, and I said to him that it was the more painful to us, as we could attribute his silence, towards us, only to our having had the misfortune to displease him. I added, that we should, in consequence, propose to the government to send other commissioners who might be more agreeable to him.

The same look, but no reply.

Do you wish, sir, that we should withdraw?

The commissioners now retired. In the ante-room, Harmand enquired “whether that silence really began on the day upon which that atrocious violence had compelled him to sign the odious and absurd deposition against the Queen. They repeated their assertions on that point, and protested that the Prince had not spoken since the evening of that day! My colleagues and I agreed, that, for the honour of the nation, which was ignorant of these unhappy circumstances — for that of the Convention, which, indeed, knew them not, but which ought to have known them — and for that even of the criminal Municipality of Paris, which knew all, and which caused all these evils, we should confine ourselves to the ordering some steps of temporary alleviation (which were immediately carried into effect); and that we should not make a report in public, but in a secret committee; and it was so done.”