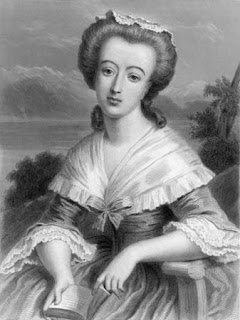 Suzanne Curchod was born in 1737 at Grassier, on the frontier of France and Switzerland. She was the daughter of Louis Antoine Curchod, the village pastor, and his French wife Magdelaine d’Albert de Nasse. Although the family was quite poor, Suzanne received a good education. Her father taught her history, sciences, languages and the classics. But the lively Suzanne wasn’t renowned and admired only for her wit, she was also beautiful. She had fair hair, sparkling blue eyes, a brilliant complexion, regular features, and a slender and well-proportioned figure. She also had refined manners, was good-tempered, had strong religious principles and was determined to always do her duty.

Such a beautiful and accomplished girl soon attracted the attention of the opposite sex. One of her suitors was the historian Gibbon. He was so smitten with her that he even wished to marry her, but his father was averse to the match and, in the end, nothing came of it. In 1760 Suzanne’s father died and, to support herself and her mother, she became a teacher. Three years later, her mother died too, leaving Suzanne, who was nearly 24, alone. In 1764, Madame de Vermenou, a widow of a French officer, visited Geneva and met Suzanne. She was so charmed with the orphaned girl that she decided to take her under her wing and brought her back to Paris with her.

Madame de Vermenou had received a marriage proposal from Jacques Necker, a rich banker. But when he met Suzanne at her house, he fell in love with her. She reciprocated his feelings and a few months later, the couple got married. They would only have one daughter called Germaine, better known as Madame de Staël. However, Suzanne found that life in Paris was different from how she had imagined it and was often homesick. “When I arrived in this country,” she says, “I thought that letters were the key to everything, that a man cultivated his mind by books alone, and was great only in proportion to his knowledge.”* But she found this was not true, and the sort of conversation she liked wasn’t fashionable at the time and, as a result, she often didn’t have much to say in company.

Language and cultural differences were also barriers: “Gilled upon by my sex to fascinate men’s minds, I was entirely ignorant of all the different shades of self-esteem, and I offended it when I thought to flatter it. What we used to call frankness in Switzerland became egotism in Paris; negligence in trifles was non-observance of the proprieties here; in a word, for ever out of tune with my surroundings and abashed by my blunders and my ignorance, never able to find the right word.”* To a friend, she also wrote: “from the day of my arrival in Paris I have not lived for a single instant on the stock of ideas that I had previously acquired; I except the matter of morals, but I was obliged to make my mind over entirely new with respect to the human character, with respect to the circumstances of life, and with respect to conversation.”*

Overtime, however, she managed to create a salon attended by some of the the most eminent men of letters of her time, such as Buffon, Marmontel, Grimm, Diderot, d’Alembert and Morellet. Morellet thus remembers Madame Necker’s salon: “The conversation there was very well, although somewhat constrained by the rigid morality of Madame Necker, in whose presence many subjects could not be mentioned, and who was especially distressed by liberty of opinion in religious matters. But on literary subjects the conversation was very interesting, and she herself talked very well indeed.”* 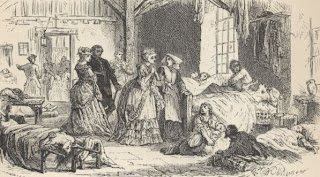 Monsieur Necker sometimes attended her wife’s salon too, but he was more of an observer than a talker and “emerged from this silence only on rare occasions, with some sharp sally, some malicious or joking sentence with which he marked as it passed a blunder or an absurd remark.”* The success of Suzanne’s salon also helped Monsieur Necker’s career. In 1776, he became Controller-General of Finances, head of the French finance ministry. Suzanne used the opportunities his role afforded her to do good. For instance, she founded a hospital where each patient had his/her own bed. This is normal for us today, but at the time it was common to put several patients in the same bed.

Madame Necker was also a writer, although, of all her works, only two, Mémoire sur l’Etablissement des hospices (1786) and Réflexions sur le divorce (1794), have survived. It seems that her works were full of high moral and literary values, but written in an obscure, complicated style that was at times hard to understand. However, she never pursued her interest in writing as much as she would have liked, and dedicated her time instead to the education of her daughter.

In 1781, Monsieur Necker was dismissed from his office, only to be called back a few years later to help solve the disastrous economical situation the country was in. The people saw him as a saviour, but a man alone couldn’t stop the Revolution. Necker convinced Louis XVI to summon the Estates Generals in 1789, but failed to address the matter of voting. There was still one vote by Estate instead of a vote by head and in the end, the King fired him again. When his popularity started to fade, the Neckers left France and returned to Switzerland. Suzanne died at Beaulieu Castle (Lausanne) in Vaud, in 1794.

Notes:
* Portraits of the eighteenth century; prehistoric and literary by Sainte-Beuve, Charles Augustin