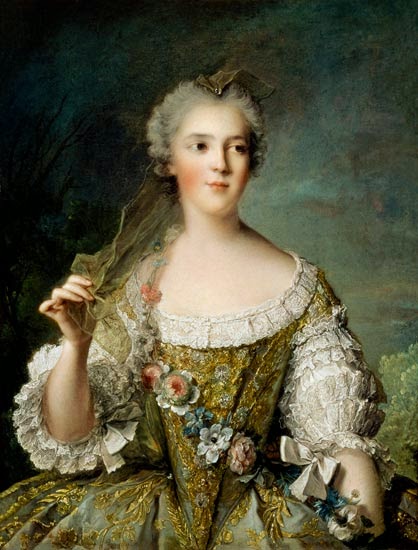 Born on 27 July 1734, Sophie Philippe Elisabeth Justine is the lesser known of the surviving daughters of Louis XV and Marie Leszczynska. Even art historians hardly know who she is. For years, one of her portraits (below) was thought to represent Marie Antoinette, and was only correctly identified recently thanks to the parquet in her library! I’m not sure Sophie would have minded though.

Sent to the Abbey of Fontevraud with her two younger sisters, Thérése and Louise, to be educated, Sophie returned to Versailles only 12 years later. Lacking both social skills and a strong, dominant personality, the shy girl was happy to appear in public only when etiquette required it. Like Madame Campan, reader to the daughters of Louis XV, wrote in her memoirs, she much preferred to be alone or with a small group of favourites ladies: 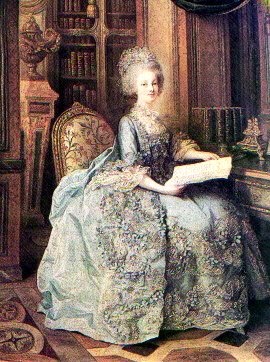 “I never saw anyone having such a frightened look; she walked at an extreme speed, and to acknowledge, without looking at them, the people who gave way to her, she had acquired the habit of looking sideways, in the manner of hares. This princess was so shy that it was possible to see her everyday for years without hearing her pronounce a single word. One asserted, though, that she displayed wit, even graciousness, in the society of some favoured ladies; she studied much, but read alone; the presence of a reader would have infinitely bothered her.

Yet on occasion this princess, so unsociable, suddenly became affable, gracious and showed the most communicative kindness; it was during thunderstorms: she was afraid of them, and such was her fright that she would then approach the least important persons; whenever she saw lightning, she would press their hands, for a thunderclap she would have embraced them; but once fair weather was back, the princess went back to her stiffness, her silence, her fierce look, passed everyone without paying attention to anyone, until the next thunderstorm brought back her fear and affability.”

Madame Sophie died like she had lived, unnoticed. She passed away of dropsy in Versailles on 2 March 1782. She was buried in the royal tomb at the Royal Basilica of Saint Denis, which was plundered and destroyed during the French Revolution.

Further reading:
Memoirs Of The Court Of Marie Antoinette, Queen Of France, by Madame Campan