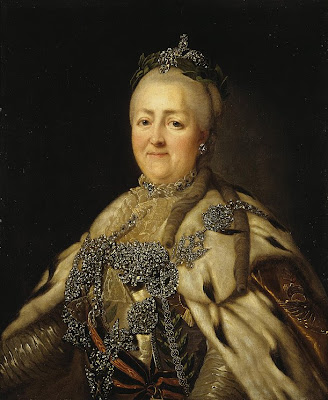 In 1795, famous portraitist Elizabeth Vigée LeBrun travelled to St. Petersburg, where she was introduced to the Empress Catherine The Great. Here’s how the painter recalls their meeting in her memoirs:

I was far from recovered from all my fatigue – since the term of my residence in St. Petersburg had been only twenty-four hours – when a visitor was announced in the person of the French Ambassador, Count Esterhazy. He congratulated me on my arrival at St. Petersburg, telling me that he was about to inform the Empress of it and at the same time to take her orders for my presentation. Very little later I received a visit from the Count de Choiseul-Gouffier. While conversing with him I confessed what happiness it would give me to see the great Catherine, but I did not dissemble the fright and embarrassment I expected to undergo when I should be presented to that powerful Princess. “You will find it quite easy,” he replied. “when you see the Empress you will be surprised at her good nature; she is really an excellent woman.” I acknowledge that I was astonished by his remark, the justice of which I could scarcely believe, in view of what I had heard up to that time. It is true that the Prince de Ligne, during the charming narration of his journey in the Crimea, had recounted several facts proving that this great Princess had manners that were as gracious as they were simple, but an excellent woman was hardly the thing to call her.

However, the same evening Count Esterhazy, on returning from Czarskoiesielo, where the Empress was living, came to tell me that Her Majesty would receive me the next day at one o’clock. Such a quick presentation, which I had not hoped for, put me into a very awkward position. I had nothing but very plain muslin dresses, as I usually wore no others, and it was impossible to have an ornamental gown made from one day to the next, even at St. Petersburg. Count Esterhazy had said he would call for me at ten o’clock precisely and take me to breakfast with his wife, who also lived at Czarskoiesielo, so that when the appointed hour struck I started with serious apprehensions about my dress, which certainly was no court dress. On arriving at Mme. d’Esterhazy’s, I, in fact, took note of her amazement. Her obliging civility did not prevent her from asking me, “Have you not brought another gown?” I turned crimson at her question, and explained how time had been wanting to have a more suitable gown made. Her displeased looks increased my anxiety to such a degree that I needed to summon up all my courage when the moment came to go before the Empress. […] 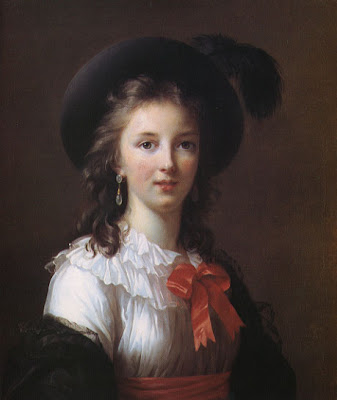 A few minutes later I was alone with the autocrat of all the Russias. The Ambassador had told me I must kiss her hand, in accordance with which custom she drew off one of her gloves, and this ought to have reminded me what to do. But I forgot all about it. The truth is, that the sight of this famous woman made such an impression upon me that I could not possibly think of anything else but to look at her. I was at first extremely surprised to find her short; I had imagined her a great height – something like her renown. She was very stout, but still had a handsome face, which her white hair framed to perfection. Genius seemed to have its seat on her broad, high forehead. Her eyes were soft and small, her nose was quite Greek, her complexion lively, and her features very mobile. She at once said in a voice that was soft though rather thick: “I am delighted, madame, to see you here; your reputation had preceded you. I am fond of the arts and especially of painting. I am not an adept, but a fancier.” Everything else she said during this interview, which was rather long, in reference to her wish that I might like Russia well enough to remain a long time, bore the stamp of such great amiability that my shyness vanished, and by the time I took leave of Her Majesty I was entirely reassured. Only I could not forgive myself for not having kissed her hand, which was very beautiful and very white, and I deplored that oversight the more as Count Esterhazy reproached me with it. As for what I was wearing, she did not seem to have paid the least attention to it. Or else perhaps she may have been easier to please than our Ambassadress.

I went over part of the gardens at Czarskoiesielo, which are a veritable little fairyland. The Empress had a terrace from them communicating with her apartment, and on this terrace she kept a large number of birds. I was told that every morning she went out to feed them, and that this was one of her chief pleasures.

Directly after my audience Her Majesty testified her wish to have me spend the summer in that beautiful region. She commanded her stewards, of whom the old Prince Bariatinski was one, to give me an apartment in the castle, as she desired to have me near her, so that she might see me paint. But I afterward found out that these gentlemen took no pains to put me near the Empress, and that in spite of her repeated orders they always maintained that they had no lodgings at their disposal. What astonished me most of all, when I was informed of this matter, was that these courtiers, suspecting me to belong to the party of the Count d’Artois, were afraid lest I had come to get Esterhazy replaced by another Ambassador. It is probable that the Count was in connivance with them about all this, but anybody was surely little acquainted with me who did not know that I was too busy with my art to give any time to politics, even if I had not always felt an aversion to everything smacking of intrigue. Moreover, aside from the honour of being lodged with the Empress and the pleasure of inhabiting such a fine place, everything would have been stiff and irksome for me at Czarskoiesielo. I have always had the greatest need to enjoy my liberty, and, for the sake of following my own inclination, I have always infinitely preferred living in my own house.