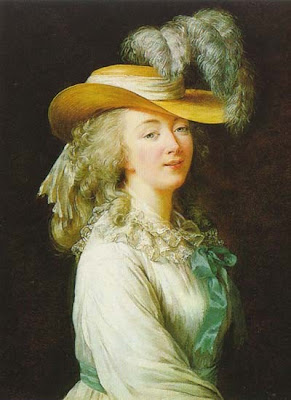 Madame Du Barry was the last mistress of King Louis XV. After the King’s death, she retired to the Château de Louveciennes and it is here that, a few years before the start of the French Revolution, Madame Vigée LeBrun, one of the most famous and successful portraitists of her time, painted the former courtesan. It is also here that she was arrested during the Terror. On 8 December 1793, Madame Du Barry was guillotined. Madame Vigee Lebrun remembers her famous model in her Memoirs:

It was in 1786 that I went for the first time to Louveciennes, where I had promised to paint Mme. Du Barry. She might then have been about forty-five years old. She was tall without being too much so; she had a certain roundness, her throat being rather pronounced but very beautiful; her face was still attractive, her features were regular and graceful; her hair was ashy, and curly like a child’s. But her complexion was beginning to fade. She received me with much courtesy, and seemed to me very well behaved, but I found her more spontaneous in mind than in manner: her glance was that of a coquette, for her long eyes were never quite open, and her pronunciation had something childish which no longer suited her age.

She lodged me in a part of the building where I was greatly put out by the continual noise. Under my room was a gallery, sadly neglected, in which busts, vases, columns, the rarest marbles, and a quantity of other valuable articles were displayed without system or order. These remains of luxury contrasted with the simplicity adopted by the mistress of the house, with her dress and her mode of life. Summer and winter Mme. Du Barry wore only a dressing-robe of cotton cambric or white muslin, and every day, whatever the weather might be, she walked in her park, or outside of it, without ever incurring disastrous consequences, so sturdy had her health become through her life in the country. She had maintained no relations with the numerous court that surrounded her so long. In the evening we were usually alone at the fireside, Mme. Du Barry and I. She sometimes talked to me about Louis XV. and his court. She showed herself a worthy person by her actions as well as her words, and did a great deal of good at Louvecienes, where she helped all the poor. Every day after dinner we took coffee in the pavilion which was so famous for its rich and tasteful decorations. The first time Mme. Du Barry showed it to me she said: “It is here that Louis XV. did me the honour of coming to dinner. There was a gallery above for musicians and singers who performed during the meal. 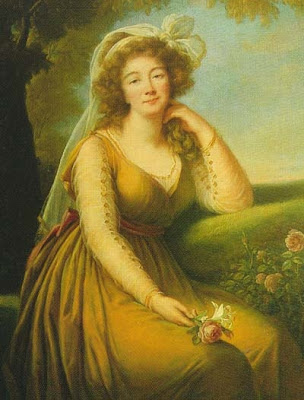 When Mme. Du Barry went to England, before the Terror, to get back her stolen diamonds, which, in fact, she recovered there, the English received her very well. They did all they could to prevent her from returning to but France. But it was not long before she succumbed to the fate in store for everybody who had some possessions. She was informed against and betrayed by a little Negro called Zamore, who is mentioned in all the memoirs of the period as having been overwhelmed with kindness by her and Louis XV. Being arrested and thrown into prison, Mme. Du Barry was tried and condemned to death by the Revolutionary tribunal at the end of 1793. She was the only woman, among all who perished in those dreadful days, unable to face the scaffold with firmness; she screamed, she sued for pardon to the hideous mob surrounding her, and that mob became moved to such a degree that the executioner hastened to finish his task. This has always confirmed my belief that if the victims of that period of execrable memory had not had the noble pride of dying with fortitude the Terror would have ceased long before it did.

I made three portraits of Mme. Du Barry. In the first I painted her at half length, in a dressing-gown and straw hat. In the second she is dressed in white satin; she holds a wreath in one hand, and one of her arms is leaning on a pedestal. The third portrait I made of Mme. Du Barry is in my own possession. I began it about the middle of September, 1789. From Louveciennes we could hear shooting in the distance, and I remember the poor woman saying, “If Louis XV. were alive I am sure this would not be happening.” I had done the head, and outlined the body and arms, when I was obliged to make an expedition to Paris. I hoped to be able to return to Louveciennes to finish my work, but heard that Berthier and Foulon had been murdered. I was now frightened beyond measure, and thenceforth thought of nothing but leaving France.