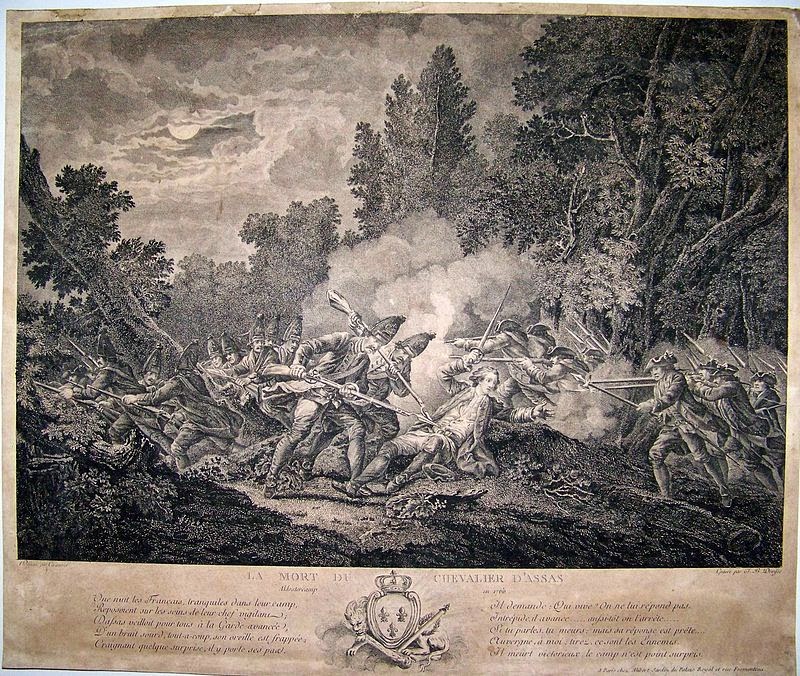 In his biography of the unfortunate Queen of France, Charles Duke Younge recalls how Marie Antoinette remembered and paid homage to a fallen war hero:

In the Seven Years’ War, when the French army, under the Marshal De Broglie, and the Prussians, under Prince Ferdinand of Brunswick, were watching one another in the neighborhood of Wesel, the Chevalier d’Assas, a captain in the regiment of Auvergne, was in command of an outpost on a dark night of October. He had strolled a little in advance of his sentries into the wood which fronted his position, when suddenly he found himself surrounded and seized by a body of armed enemies. They were the advanced guard of the prince’s army, who was marching to surprise De Broglie by a night attack, and they threatened him with instant death if he made the slightest noise.

If he were but silent, he was safe as a prisoner of war; but his safety would have been the ruin of the whole French army, which had no suspicion of its danger. He did not for even a moment hesitate. With all the strength of his voice he shouted to his men, who were within hearing, that the enemy were upon them, and fell, bayoneted to death, almost before the words had passed his lips. He had saved his comrades and his commander, and had influenced the issue of the whole campaign.

The enemy, whose well-planned enterprise his self-devotion had baffled, paid a cordial tribute of praise to his heroism, Ferdinand himself publicly expressing his regret at the fate of one whose valor had shed honor on every brother-soldier; but not the slightest notice had been taken of him by those in authority in France till his exploit was accidentally mentioned in the queen’s apartments. It filled her with admiration. She asked what had been done to commemorate so noble a deed. She was told “nothing;” the man and his gallantry had been alike forgotten.

“Had he left descendants or kinsmen?” “He had a brother and two nephews; the brother a retired veteran of the same regiment, the nephews officers in different corps of the army.” The dead hero was forgotten no longer. Marie Antoinette never rested till she had procured an adequate pension for the brother, which was settled in perpetuity on the family; and promotion for both the nephews; and, as a further compliment, Clostercamp, the name of the village which was the scene of the brave deed, was added forever to their family name.

The pension is paid to this day. For a time, indeed, it was suspended while France was under the sway of the rapacious and insensible murderers of the king who had granted it; but Napoleon restored it; and, amidst all the changes that have since taken place in the government of the country, every succeeding ruler has felt it equally honorable and politic to recognize the eternal claims which patriotic virtue has on the gratitude of the country.