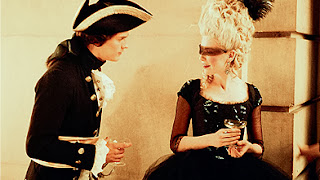 Much has been made about the meeting between the charming Marie Antoinette and the dashing Swede nobleman Axel was Fersen, but, as Antonia Fraser relates in her book “Marie Antoinette: The Journey”, it was all very innocent:

On 30 January, Fersen went to the opera ball in Paris, arriving at one o’clock in the morning. There was a huge crowd, and those present included the Dauphin and the Comte de Provence as well as the Dauphine. According to custom, the royal party and others were masked in order to preserve their incognito. It was in this way that the eighteen-year-old Fersen fell into conversation with a young and unknown masked woman. As he recorded in his Journal intime: “The Dauphine talked to me for a long time without me knowing who she was; at last when she was recognized, everybody pressed round her and she retired into a box at three o’clock: I left the ball.”

Thus the myth of the instant love affair, a coup de foudre (perhaps literally so) in the opera box, so beloved of novelists and film-makers, remains just that. What did happen was the conventional establishment of Fersen’s social credentials. He was subsequently asked to a few bals à la Dauphine before departing for England.

And no, the two never became lovers.