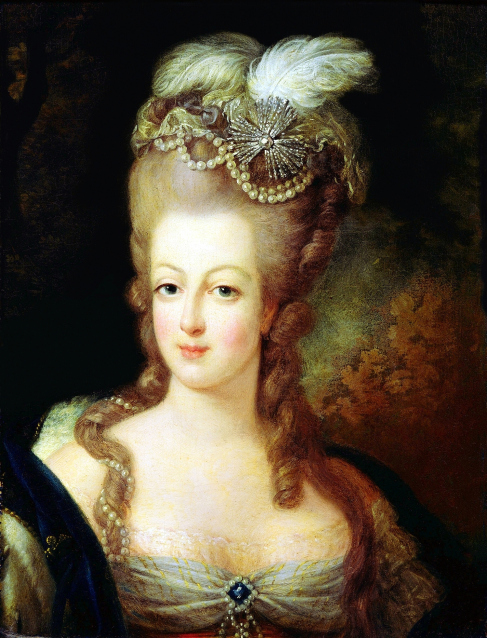 Marie Antoinette was famous for her beautiful looks and charm, but such beauty, as women know all too well, is rarely natural. It often requires a little helping hand. And, as Queen of France, Marie Antoinette had many people, and a huge budget, to help her look her best. Yet, her tastes were simple. And she would have gladly done without all the pomp and fuss that surrounded her toilette. Here’s what that involved: 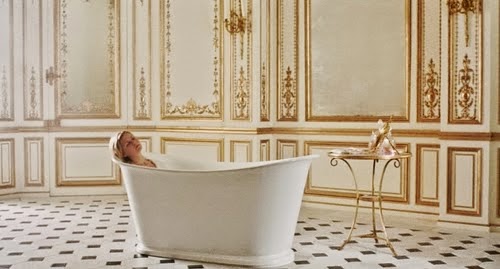 There’s only so much makeup can do for you if you don’t take proper care of your skin. Marie Antoinette knew this and, each morning, cleansed her face with Eau Cosmetique de Pigeon (yes, it was really made with pigeons!). The Toilette Of Health, Beauty, And Fashion shared the recipe, first used by Danish women, with their readers:

“Take juice of water-lilies, of melons, of cucumbers, of lemons, each one ounce; briony, wild succory, lily-flowers, borage, beans, of each a handful: eight pigeons stewed. Put the whole mixture into an alembic, adding four ounces of lump sugar, well pounded, one drachma of borax, the same quantity of camphor, the crumb of three French rolls, and a pint of white wine. When the whole has remained in digestion for seventeen or eighteen days, proceed to distillation, and you will obtain pigeon-water, which is such an improvement of the complexion.”

After cleansing her skin, she would apply Eau des Charmes, an astringent, and finally, Eau d’Ange, a whitener. To keep her hands soft, the Queen slept wearing gloves infused with sweet almond oil, rose water, and wax. Unlike most people at Versailles she bathed frequently, but always wearing a flannel chemise to protect her modesty. Once in the bathtub, she would wash herself with a scented (bergamot, amber and herbs) soap, exfoliated her skin with muslin pads filled with bran, all the while sitting on a large pad filled with pine nuts, linseed, and sweet almonds. 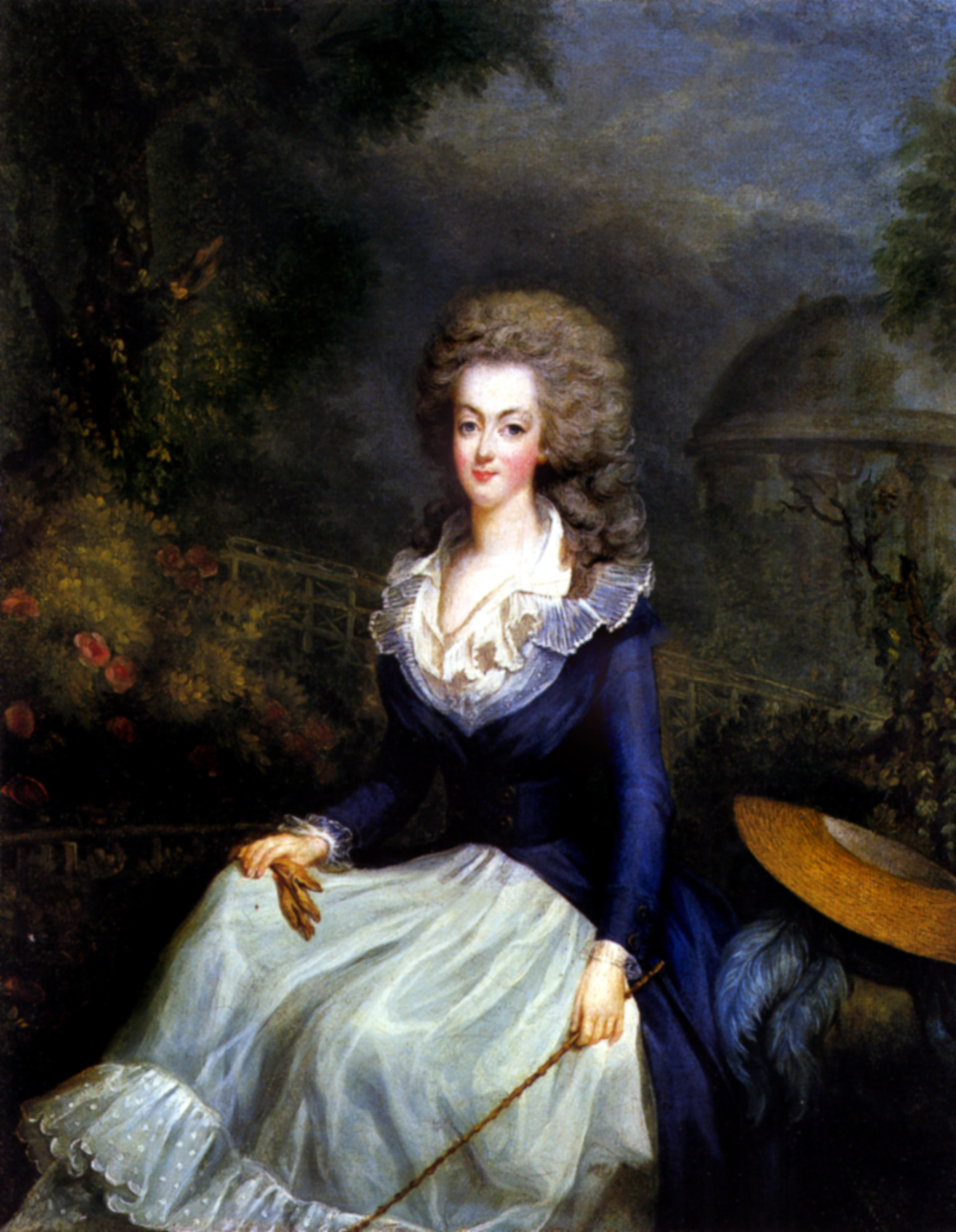 Once her skincare routine was complete, it was time for makeup. Eau d’Ange probably didn’t whiten her skin that much, so to make her face even paler, a white paint was gently and carefully applied. This was then set with a dust of scented powder. Rouge was then applied to her cheeks. The Empress Maria Theresa wasn’t fond of rouge and would have rather her daughter had stayed away from it, but as Marie Antoinette told her, everyone did it at Versailles. It would have been weird for her not to. Then, khol was used around the eyes to define and enhance them. Finally, a scented pomade was used to give her lips, eyelashes and eyebrows a glossy look. 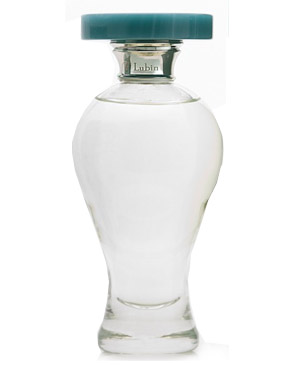 Perfume was a necessity at Versailles. The palace was occupied by thousands of people, few of which paid much attention to their personal hygiene. The whole court stank. To keep the Queen’s room smelling nice required a vast array of fresh flowers, pot pourri, and perfume satchels. These usually smelled of orange blossom, rose, violet, lavender, and lemon, all the scents the Queen loved.

Those aromas also featured prominently in her own perfumes. The queen loved both simple scents, like violet or orange blossom water, and more complicated concoctions featuring iris, jasmine, lily, vanilla, and musk, sometimes infused with spicy accents of cinnamon and cloves. 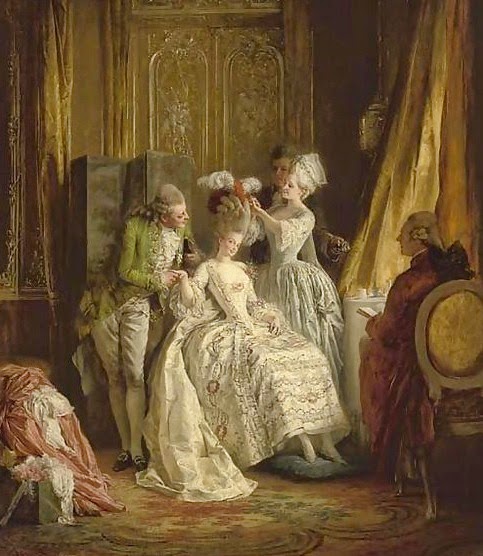 Marie Antoinette had a very vast collection of clothes. As Queen of France, she couldn’t be seen wearing the same frock twice (although she did recycle her favourite gowns). And etiquette dictated that she changed three times a day! She would first don a formal dress, usually made of silk or velvet, to attend Mass. Then, she changed into an informal, more comfortable, muslin or cotton dress for the afternoon.

Finally, she would slip into a very elaborate and luxurious gown to attend dinner, and any balls, concerts, or any other evening event. That’s why she was supposed to order 36 new dresses every summer and another 36 every winter; 4 new pair of shoes every week; and she needed 18 pair of scented gloves at all times.

According to Emile Laglande, Rose Bertin’s biographer, “the Queen usually had for winter twelve state dresses, twelve simple dresses, and twelve rich dresses on panniers, which she used for card-parties or intimate supper-parties. Summer and spring toilettes served for autumn wear also. All these toilettes were remodelled at the end of each season, unless Her Majesty desired to keep some as they were. No mention is made of muslin and cotton, or other dresses of that kind; these had only recently come into fashion, and they were not renewed each season, but were made to serve for several years.”

The Queen’s dress allowance was therefore vast too. The Queen had 120,000 Livres a year to spend only on her wardrobe, but her fondness for Rose Bertin’s designs (which ranged from 1000 to 6000 Livres each!) meant she often exceeded her budget. The two women often worked together to create new gowns and styles. Most of her dresses and accessories were in the pastel shades the Queen loved so much. Her favourite colours were pale green and yellow, lilac, and light shades of grey. 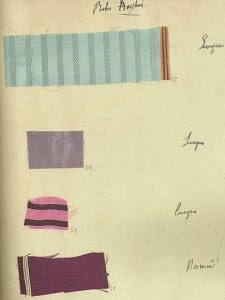 Every morning, when she woke up, the Queen was presented by the head lady’s maid with her gazette des atours. This was a big book containing fabric swatches from any dress she owned. Marie Antoinette would flip its page and mark with three pins the patterns of the dresses she wished to wear that day. Then, the page of the wardrobe would bring them to the Queen’s room in a basked covered with green cloth.

Only then the Queen would begin getting dressed. This was a public occasion, with her rooms full of courtiers, all hoping to attract her attention and become a favourite. As she told her mother in a letter, “at twelve what is called the Chamber is held, and there every one who does not belong to the common people may enter. I put on my rouge and wash my hands before all the world; the men go out, and the women remain; and then I dress myself in their presence.” 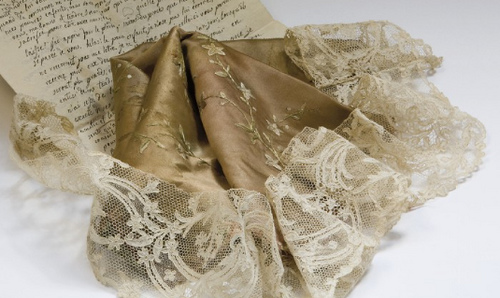 The Queen’s vast clothes collection was housed in three rooms, “lined with cupboards, some with shelves, some to hang garments”. The rooms also featured large tables “to lay the dresses on to be folded.” The Queen’s closet, like pretty much any other room at Versailles, was open to the public. Anyone who was decently dressed could visit them and marvel at the gorgeous display of clothes.

What do you think of Marie Antoinette’s toilette?

Further reading:
Madame Guillottine
Rose Bertin, the creator of fashion at the court of Marie-Antoinette by Émile Langlade
The Life of Marie Antoinette, Queen of France, by Charles Duke Yonge
The Toilette of Health, Beauty, and Fashion