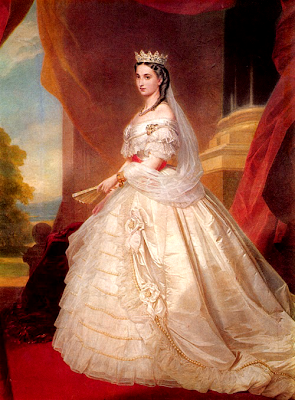 “I remember aunt Carlotta very well. After the Emperor, in 1867, was killed by revolutionary Benito Juarez, she lived in Trieste for a while, at the Miramare Castle, then, at the beginning of the twentieth century, she returned to Belgium. During the last years of her life, she was practically secluded at the Bouchout Castle, for more than 20 years already. She was considered “the insane” by everyone. But I don’t think she really was. Shortly before her death I went to visit her with my parents. She stared into space for a long time, her face haggard, her hair dishevelled: it seemed like she didn’t notice anything of what was happening around her. But at some point my father and my mother, who were talking between themselves, couldn’t remember the name of a recently-nominated minister. She interrupted them and gave them the new minister’s personal details in a very detailed way. Then, as if she had noted my surprise, she told me: ‘I’ll teach you a secret: when you want to escape your past, pretend to be mad. No one will ever ask you indiscreet questions again..’

More recently, in ’92, shortly after my move to Cuernavaca, I began to be interested again in my unfortunate “ancestor”‘s story.I visited Jardin Borda, the splendid palace where she used to spend the holidays with Maximilian of Hapsburg, now turned into a museum. Carlotta, just like me, adored this city. She preferred Cuernavaca even to the capital, where she had a beautiful palace too. And it was from Cuernavaca that the Empress left for Europe in the attempt to save her husband, to ask for help to the European sovereigns she was related to. Maximilian, however, wasn’t faithful to her. Here they’ve told me lots of anedoctes on the Emperor’s nighttime escapes: he hid his face with a sombrero, wore a poncho and, taking advantage of the darkness, he went to met up with some beautiful Mexican girl. In this city lived his favourite one, known as the India Bonita. That’s how the colonial house where he lived, which has today become a restaurant, was called. Some time ago, a rather funny thing happened to me. I went to visit the city of Oaxaca. The local authorities did nothing but praise Benito Juarez, the hero of the Mexican Revolution. I made sure not to remind them that the man in question had killed my great-uncle…”

Notes:
*translated from Italian into English by me