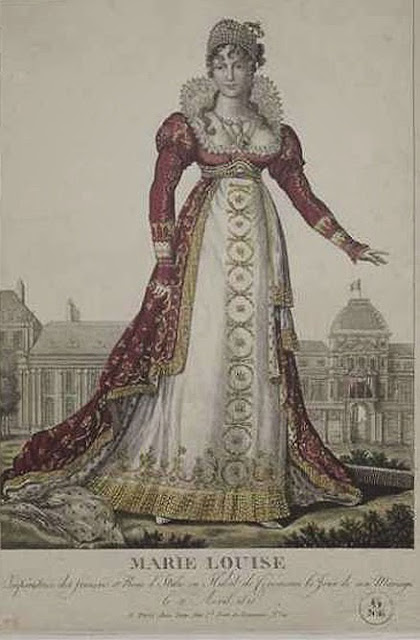 On 2 April 1810, Marie Louise Of Austria walked down the aisle at the “Salon Carré” turned chapel, in the Palais De Tuileries, to marry Napoleon, the man she had been thaught to hate since she was little.

To add to her uneasiness, she wore a dress entirely chosen and made for her in France (like her great-aunt Marie Antoinette before her, Marie Louise had had to leave all her belongings behind at the French border). To make matters worse, reminders of Josephine, Napoleon’s first wife, were everywhere. Including the new bride’s outfit.

The wedding dress she wore underneath was created by Leroy, the most fashionable and famous dressmaker of the Directory and Empire eras. His success was due both to his own talent and to Josephine’s patronage. The ex-empress had often worn his creations.

For Marie Louise, he designed long, flowing gown with a high waist that hugged her figure. It was made from silver tulle netting, embroidered with lamé and pearls. Her hair was covered by a veil in Alencon lace, held in place by a sparkling diamond tiara.

On her feet, she donned a pair of white satin slippers, embroidered with silver, created by Janssen. Unfortunately they were too small and hurt her feet. To finish off her outfit, she wore diamonds from the French Crown Jewels.