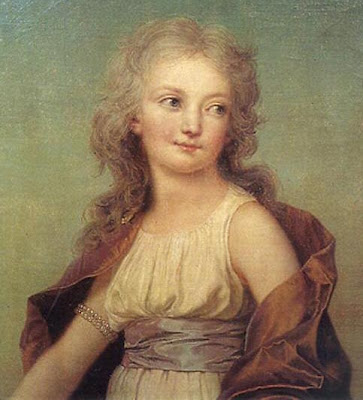 Marie-Therese’s birth was a disappointment for everyone but her parents. It took Marie Antoinette and Louis XVI seven years to conceive, and when, on 19th December 1778, courtiers crowded in the Queen’s bedchamber to witness the birth of the baby, it wasn’t the long-awaited dauphin that made his appearance into this world, but a healthy, fair-haired and blue-eyed baby girl. Her parents were, much to the astonishment of the court, absolutely besotted with her and celebrated her birth like she had been a boy. As the Queen was recuperating from her arduous labour, Louis XVI spent many hours at her bedside and in the nursery with their newborn baby. Marie Antoinette from the start decided that she was gonna take care of her children herself as much as it was possible for a Queen to do, and for 18 days breastfed her daughter, an act that horrified many, including her mother, the Empress Maria Theresa. Upon hearing this news, the Empress sent a letter to her daughter, ordering her to cease such “barbarism”, warning her that breastfeeding would prevent her from getting pregnant again. Marie Antoinette obeyed. 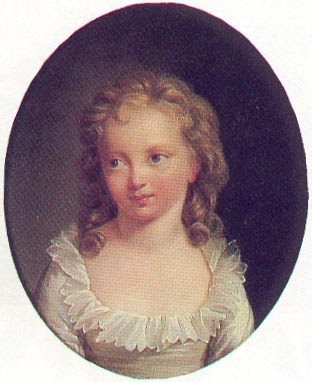 Both the King and Queen would spend as much time as possible with their daughter when they weren’t busy attending to matters of state. The baby was growing up strong, healthy, active, clever and gracious and Marie Antoinette, like every proud mother, couldn’t stop talking about her daughter to everyone who listened. Even her letters were full of news and anecdotes about her little girl. All the while, though, the Queen was trying to get pregnant again and, on 22nd October 1781, Louis Joseph, the heir to the French throne was finally born. Unfortunately, the little boy would suffer ill-health throughout his life, which deeply worried both his parents. In 1785, Marie Antoinette gave birth to another boy, Louis Charles. He looked like a little angel, with his long blonde hair and cerulean blue eyes. Marie Therese doted on, and pampered her little brother a lot. The two were practically inseparable. A year after Louis Charles’ birth, the Queen gave birth to her last child, a daughter named Sophie. Sadly, the baby would only live a few months. Her death was a really hard blow for her 8-year-old sister Marie Therese. 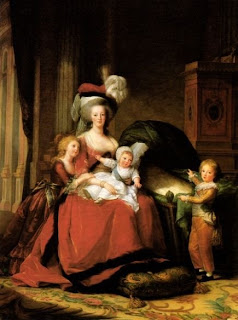 The children grew up in the dazzling court of Versailles and, from the moment of their birth, they were always at the centre of attention. Everyone they met, apart from their parents, had to bow and curtsey to them. Marie Therese also had to take part in the daily rituals and ceremonies that marked life at Versailles, often in very heavy, although expensive and beautiful, gowns. For such a little girl, this must often have felt really exhausting! But she also got to meet sovereigns, dignitaries, intellectuals, musicians and other public figures that every year visited the court, and they were all charmed by the little Madame Royale, as Marie Therese was called. Versailles was both an exciting and stifling place to grow up in. Marie Therese learned how to behave impeccably in public, but on those occasions, she often had a serious and even glum demeanour, which caused her mother to nickname her Mousseline Serieuse. However, she thrived when she was left free to play and act like the child that she was. Unfortunately, this duality in her personality caused a lot of people to consider her haughty, selfish and just a spoiled brat, but she was also an intelligent and strong-willed little girl who found having to act like an adult so often quite hard. 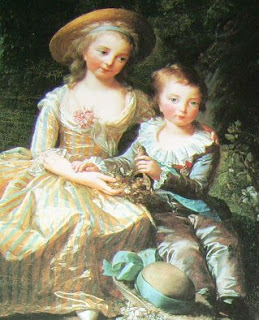 Marie Therese was always very close to her father. The Marquis de Bombelles writes in his journal of how the little princess told him that she loved her father better than her mother because the Queen always walks “straight ahead of me and doesn’t even look to see whether I am following her… whereas Papa takes me by the hand and looks after me”. The relationship with her mother was more complicated because it was the Queen that imparted discipline and punishment to her children. The little Madame Royale shocked everyone who heard her when, informed that her mother had not died after a bad fall from her horse, replied that if she had, she would have been free to do whatever she wanted when she wanted. But this does not mean that she hated her mother. Sometimes, for instance, she would sneak into Marie Antoinette’s room early in the morning so she could spend some time alone with her before the crowd of courtiers arrived to demand the Queen’s attention. 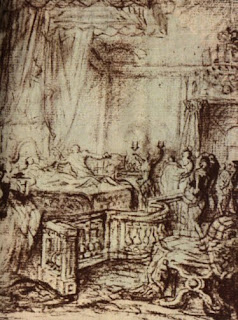 Marie Antoinette was a sensitive and attentive mother who taught her children to be considerate of others and do what they could to help those less fortunate. Marie Therese was taught to make socks for the poor and donate to them a part of her allowance. One New Year’s Day, Marie Antoinette showed some exquisite and expensive toys to her children, who thought they could choose whatever they wanted among them. But their mother told them they could only look at them. They’d be returned, and the money that would have been spent to buy them would instead be used to buy necessities for poor children, who were struggling more than usual to make ends meet after a particularly harsh winter. Madame Royale learned her lesson and she would be known throughout her life for her kindness to others. Another time, the Queen gave her 4-year-old daughter a doll dressed in the Carmelite habit to prepare her to meet her aunt Louise who had taken the veil. This prevented the child from being shocked once she reached the convent. The nuns were charmed with her. Marie Therese was also encouraged to play with and wait on poorer children. One of them was called Ernestine. When her parents died, she was adopted by the royal family and the two girls became inseparable. 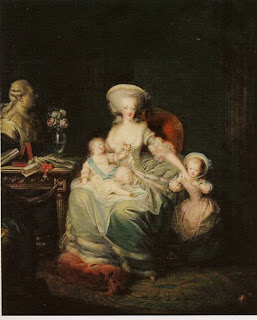 Marie Antoinette also paid close attention to her children’s education. When the Dauphin was about one, the Princesse de Guemene resigned from her post as Governess to the Children of France due to a scandal involving her husband’s debts. The Queen decided to entrust her children to friendship and gave the job to her best friend, the Duchess De Polignac. This move attracted lots of criticism because traditionally at Versailles jobs were assigned to people based on their ranks and that of the Duchess just wasn’t deemed high and noble enough for such a prestigious position. The royal children also had several tutors, which were supervised by their mother. Their father, instead, often attended their geography’s lessons (it was a subject the King particularly loved), and he even commissioned a huge globe for them. In addition, Louis XVI also made up “games” to help his children retain the information they had learned. Madame Royale was taught religion by a very special teacher: her very pious aunt Elizabeth. Needlework, she learned from her mother, Marie Antoinette. 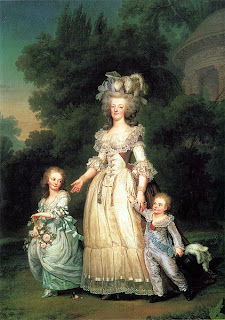 As she grew older, Marie Therese, who often accompanied her parents on their social outings, began to witness the disrespect and hatred the people felt for her mother. The country was on the brink of bankruptcy and the people, who needed a scapegoat, blamed their foreign Queen. Her father wasn’t spared criticism either. When she attended the ceremony of the opening of the Estate Generals with her family, Madame Royale noticed that the members of the Tiers Etate refused to kneel in front of their King. She was also shocked when the Duc d’Orleans, refused the invitation of his royal cousin to sit with his family. These were insults and the child felt confused. She couldn’t understand why people would thus mistreat her beloved papa. But there were much bigger sorrows in store for Marie Therese. The Estate Generals also coincided with the death of her older brother, the Dauphin Louis Joseph. It was a blow deeply felt by everyone, but the royal family wasn’t allowed a lot of time to mourn. The Estate Generals failed to solve the problems of the country. The people were growing more restless and violent with each passing day and, on 14th July 1789, the Bastille was stormed. French nobles started to emigrate abroad. Among these were the king’s brother, the Count d’Artois with his wife and children, who were close friends of Madame Royale, and the Polignacs. The royal children needed a new governess and the job was given to Madame de Tourzel. The Queen welcomed her with these words: “Madame, I had entrusted my children to friendship; today, I entrust them to virtue”. 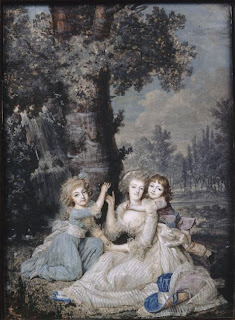 Life was changing for Madame Royale but it was on 5th October 1789 that her idyllic childhood came to an abrupt end. She was dining with her brother and mother at the Petite Trianon, after a morning spent playing happily in the gardens, when they were told a mob was marching on Versailles. They went straight back to the Palace. Confusion reigned as no one really knew what the best thing to do was. Finally she went to bed at midnight, when everything was still quiet. Mayhem exploded around 5am when the mob forced open the gates and entered inside the Palace. Marie Antoinette managed to narrowly escape from the blood-thirsty mob into the King’s room and, once she had made sure her husband and son were together and safe, she went to fetch her daughter, who was sleeping in Madame de Tourzel’s apartments. It was clear now that the royal family had no choice but to go back to Paris with the crowd. But first, a last test awaited the Queen. The mob demanded her to come to the balcony. Although she was advised not to, she took both her childrens* by the hand and stepped onto the balcony. But the crowd wasn’t pleased. They wanted her alone. She took the children back inside and out she stepped again. Alone. She curtsied to the people, which really impressed them and a few of them cried “Vive la Reine!”. Finally, she went back inside again. Madame Royale was deeply impressed by her mother’s bravery and her example would guide her throughout her life. At two o’clock in the afternoon, after they had witnessed horrors, abuses and obscenities, the royal family left for Paris. They would never see Versailles again.

Notes:
*Marie Therese later recalled that the Queen only brought her brother on the balcony with her, but she also says that she was very shocked and anxious at the time, so her recollections about the event may have been somewhat confused.