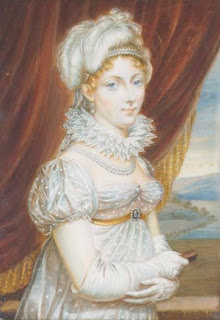 Marie Therese of France had been brutally separated from her family during the French Revolution. Her parents, her little brother and her aunt Elisabeth had all been killed, while the luckiest members of the family had managed to escape abroad. The forsaken princess had spent endless months in her Temple prison wondering what had happened to them all, and once freed she was sent to Austria to meet relatives she had never really known. She would spend 3 years there before finally being allowed to rejoin her Bourbon relatives in 1799. She must have felt very thrilled yet nervous when she boarded the carriage that would take her to Mitau, where her family resided.

She was taking with her one of her most treasured possessions, which had just found its way into her own hands: the chemise her father Louis XVI had worn to the guillotine. For the rest of her life, it would never leave her side. Marie Therese had just arrived at the outskirts of Mitau, when she was met by her uncle Louis XVIII, his wife and her fiancé, the Duc D’Angouleme. The princess threw herself at her King’s feet and sobbed: “I see you at last. I am so happy. Here is your child; please be my father.” They all embraced and continued their journey to Mitau Castle, where Marie Therese was greeted with cheers. As she looked at her old friends and family members assembled in the room, she finally felt at home.

On 10 June 1799, Marie-Therese finally married the Duc D’Angouleme. Louis XVIII had a very special present for the couple: his brother Louis XVI’s wedding ring. At this time, people started writing their own memoirs and recollections of the Revolution and the King prompted his niece to do the same. So, poor Marie-Therese spent the first few months as a newly-wed being constantly reminded of the horrors she had faced in those terrible years. No wonder people commented that she didn’t look happy! In January 1801, the French royal family received another blow. The tzar Paul, who had just turned its back on the allies, ordered Louis XVI to leave his kingdom. Marie-Therese could stay but she decided to go with her uncle. 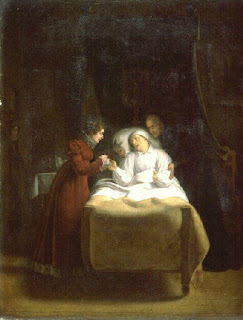 It would be a very tough journey. It was the middle of winter, the weather was ruthlessly cold, the snow deep and the family had little money and no clear destination. At first, they took refuge in Warsaw, where Marie Therese was very loved and praised for her charity to the poor, and after Paul’s death, they went back to Mitau. But this time they lived in a smaller house, and their pension was smaller too. In the meantime, Napoleon declared himself Emperor of the French and started waging war against all of Europe. Marie Therese, together with the Abbé Edgeworth, who had been with Louis XVI during his last hours, nursed the wounded soldiers that arrived at Mitau from the Prussian and Russian fronts. As a result, the Abbé contracted typhoid and Marie Therese insisted on nursing him till the end. She was at his side when he died on 22 May 1807.

The Russian Emperor now decided to sign a peace treaty with Napoleon, so it was time for the French royal family to move again. This time, they went to England. Here, they resided at Hartwell House in Buckinghamshire. The English country life suited Marie Therese. She went to church, took care of the flower and vegetable gardens, went horse riding, read books in the library, did needlework and enjoyed simple meals with her family and their guests. She also enjoyed her social life. She attended balls, had the place of honour at the parties given by the Prince Regent, travelled through the country, and enjoyed the spas at Bath.

Bad news, however, continued to arrive. Marie Therese lost two people dear to her. Count Fersen had been murdered in Sweden by political enemies, and her aunt Marie Josephine, Louis XVIII’s wife, died of dropsy. She was also very sad to learn that Maria Louisa, the Austrian Emperor’s daughter, with whom she had often played back in Vienna, had married Napoleon. Soon, she gave him a son. The future of the Bourbon dynasty was now more uncertain than ever. But Napoleon’s success couldn’t last forever and after his invasion of Russia failed, he had no choice but to abdicate. When Marie Therese learned that she was finally going back to France, she cried for joy.