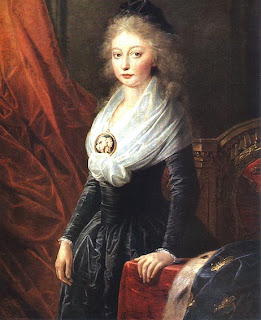 On 19th December 1795, Marie Therese, the only surviving child of Louis XVI and Marie Antoinette, finally freed from her prison, boarded a carriage that was to take her to her relatives in Austria. The journey was full of danger, forcing the august passenger to travel incognito. It was feared that anti-royalists would try to kidnap and kill her, but the carriage was also followed by spies at the service of her uncle Louis XVIII, the Austrian emperor Leopold Franz II, and Spanish King Charles IV. Marie-Therese, in fact, was a very important prize: her hand in marriage could lead her husband to the throne of France. At the time, there were two candidates to her hand: her cousin Louis-Antoine, Duc d’Angouleme of France, the son of the Comte D’Artois, supported by Louis XVIII, and Archduke Karl of Austria, Franz’s brother, supported by the Austrians, who hoped thus to control France.

Marie Therese knew of Franz’s plans, but she had resolved to marry her cousin Louis-Antoine because she believed in her heart that that was what her parents would have wanted. She had decided to remain in Vienna only until she was allowed to go to Rome, where her father’s aunts lived. The Princess arrived at the Hofburg, the imperial palace in Vienna, on 9th January 1796. Here she met her cousin, the Emperor Franz II, and his wife, Maria Theresa of Sicily. Franz believed that Marie Therese would have wanted to exact revenge on the people of France for murdering her family, but he was wrong. She still cared deeply for her country and its people and she had every intention of doing what was good for them, and not for Austria. 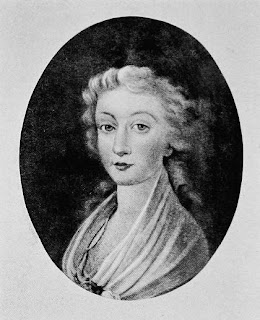 So Franz decided to “austrify” her. He sent away Hue and Clery, two loyal servants of her poor late father, and her entire French entourage, and instead granted her unlimited access to her Austrian family. She was treated like an esteemed member of the family, given beautiful and lavish clothes and a very generous allowance and was invited to balls and parties where she enjoyed herself very much. But she still had no intention to cooperate with the Emperor’s plans, much to his chagrin and frustration. He now decided to keep her under close surveillances and control her correspondence, which she expected. Still, she believed he was a good man at heart and that, with time, he would respect her wishes and let her marry the Duc D’Angouleme. In the meantime, her uncle Louis XVIII had already received from the Pope permission for the two cousins to marry. The Duc’s rival then left the court. He was called to lead the imperial forces against Napoleon’s army, who had already conquered Italy and was now fighting on the Rhine.

Still, Louis XVIII was concerned Marie-Therese may change her mind and marry the Archduke Karl. It seems that Karl, in fact, really and deeply cared about Marie-Therese, and had been full of attentions towards her, whether Louis-Antoine had never even written to her once. So, Louis suggested to her niece that the Duc D’Angouleme was in love with her too, but being too shy to reveal his feelings needed some encouragement. She wrote to him and the two started a correspondence that was however friendly, not romantic or charming. Deciding to marry her cousin was not the only way in which she was serving the Bourbon cause. She constantly pleaded their cause with the Emperor, and, when she came in the possession of some of the money her father had given to a certain Gouverneur Morris for safekeeping, sent it to the emigrees. 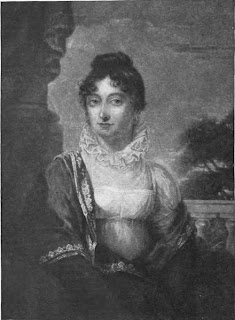 In April 1797, the Duc D’Angouleme arrived in Blakenburg to be nearer to Marie-Therese. But Napoleon was getting too close to Vienna and so Marie-Therese was sent to a convent near Prague where her aunt Maria Anna would take care of her. She left the tranquillity of the convent in September, when the Emperor decided to negotiate peace with Napoleon. While dealing with the French, he also loosened the surveillance on Marie Therese and she was now able to meet, for the first time in years, a member of her French family, the Duc D’Enghien, which had a profound effect on her. She could also again receive Hue and Cleary and have contacts with the French emigrees.

But this joy was tarred by rumours that started to circulate about her little brother, Louis XVII. People started to say that the unfortunate little boy hadn’t died in prison after all and men pretending to be Louis Charles started to appear. Marie-Therese always investigated these claims, which pained her very much, but these men always turned out to be impostors. Louis Charles was dead. Marie Therese, instead, was destined to live a long life. But not in Austria. In 1798, the Emperor finally agreed to let Marie-Therese marry the Duc D’Angouleme. She was gonna be reunited with her French family at last.