The royal family arrived at the Tuileries Palace on 6th October 1789, at around 10:30 pm, after a long and exhausting journey. Tired and bewildered, that night the family had to sleep on rags, chairs and tables. The Palace, in fact, wasn’t ready for their arrival. It hadn’t been inhabited since the time of Louis XV and it was thus dark, smelly and poorly furnished, which caused the little Dauphin to remark that he found the place very ugly. Later, some pieces of furniture, including Marie Therese’s pianoforte, were brought from Versailles to the Tuileries, and overtime, life at the Palace approached a kind of normality. However, this would remain till the end a very distressing time for the family.

The King’s bedroom was on the first floor, near to that of his son, while the women – Marie Antoinette, Marie Therese, Ernestine, Madame de Tourzel and her daughter Pauline – were on the second floor. A private staircase joined their rooms to those of the King and the Dauphin. The royal couple supervised their children’s education, helped them study, and wrote letters to friends and family. On Marie Antoinette’s suggestion, Madame de Tourzel sometimes invited guests to have tea with Marie Therese, Ernestine and Pauline to distract them from what was happening in the country. The family would have breakfast together, and, on Sundays, they would dine in public like they used to at Versailles. Other ceremonies, such as the King’s lever and coucher (rising and goodnight) were resumed and the royal couple would still receive diplomats. It was a court, albeit a small one.

It was also full of spies. Although only 10, the little Marie Therese learned to be very careful when she talked, for fear that her words may be overheard, misconstrued or reach the wrong ears. The Queen also invented a special, secret code to communicate with her family. They were always closely watched and had no privacy. They had had little even before, but now they couldn’t even spend a few carefree hours at the Petit Trianon. Marie Therese missed Versailles and the countryside. Her mother would sometimes take her and her brother to the public park, the Bois de Boulogne, but they had to go there as secretly as possible to avoid the crowds of people that would amass in the courtyards and outside the palace to see, sneer at and insult them. 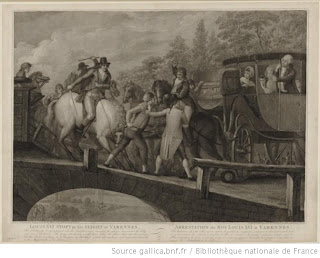 In February 1790, the family lost one of their chief allies. The Emperor Joseph, Marie Antoinette’s close brother and protector died. He was succeeded by their brother Leopold, who was less close to the Queen of France but still promised her his support. It was a hard blow, but life went on. The children were growing up and a couple of months later, Marie Therese was due to have her first Communion. Traditionally, this should have been celebrated in style, but due to the unstable and dangerous political situation it was a very subdued affair instead. Only five days later, the National Assembly declared that the Catholic Church would no longer to be the official chief religion of the country, which deeply affected and tormented the pious Louis XVI.

That summer the family managed to spend some time at Saint-Cloud, in the countryside, returning briefly to Paris for the Fete de la Federation, a great celebration to mark the anniversary of the storming of the Bastille. At Saint Cloud the family enjoyed more freedom. They could hunt, walk in the garden and receive visitors. But the following year, this too was denied them. They were forcifully prevented to leave for Saint-Cloud at the very last moment. For the King, this was the last straw. Finally, he was coming to the conclusion his wife had reached long ago. They had to leave. But he wouldn’t abandon his country.

He decided to head to Montmedy, a fortress in northeastern France, from whence he hoped to regain control of the country. Preparations were made so secretly that even Madame Royale didn’t know of the plan until she was woken up by her mother at the very last moment, on the night of 20th June. The family mounted the carriage in disguise and carrying fake passport. But despite all their precautions, their flight failed. The family was discovered and captured at Varennes. Their journey back was harrowing. Although they had arrived in Varennes in only 24 hours, it took 3 days and a half to reach Paris. Throughout the journey back, the crowds would insult the family, try to overturn the carriage and even poke lances through its sides. The children were terrified. It was a journey that would hunt Madame Royale for the rest of her life. 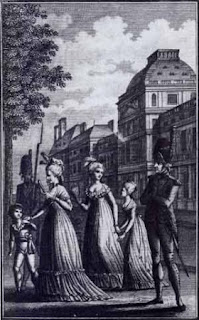 This failed flight greatly undermined the prestige of the King, who was now seen as a traitor. The family was now more guarded than ever, and the Queen even had to ask the guards for permission to see her son, the Dauphin. In the meantime, Austria was harbouring the emigres, who had been condemned as traitors by the French government, and even gave them funds. France had no choice but to declare war on Austria. The hatred against Marie Antoinette grew now even stronger and, as the anniversary of the flight to Varennes approached, the family feared some act of violence. They were right.

On 20th June, the mob, with the excuse of wanting to plant some “liberty trees” in the garden at the Tuileries, stormed the Palace. The royal family was protected only by a bunch of loyal courtiers and grenadiers. The Queen got separated from the King and took refuge in a room with her children, as the people screamed for her head. At one point Madame Elizabeth, the King’s sister, was mistaken for the Queen. When someone shouted she wasn’t, the brave Elizabeth replied not to undeceive the crowd. She would have been willing to die to save her sister-in-law. The King and Queen were even forced to wear the bonnet rouge, the red cap of the revolutionaries, to please the people. Finally, late in the evening, after many of the royal family faithful troops had been killed, the officials of the National Assembly restored order and the family was reunited.

After this harrowing experience, Marie Therese tried to imitate her mother’s behaviour and be as brave as her. The little Louis Charles instead stopped speaking and kept clinging to his mother. But worse was yet to come. A rumour reached Paris that an army was marching on the town to loot it and free the royal family. The King and Queen prepared for what was now inevitable. On 10th August 1792, the crowd attacked the Palace, defended only by the Swiss Guards, who were mercilessly slaughtered. The royal family sought refuge at the National Assembly. They were left standing for the entire day without neither food nor water, while some of the deputies accused the King and Queen of being traitors, and listening to the noises of the fight outside. Finally, the battle was over. The French monarchy had fallen.