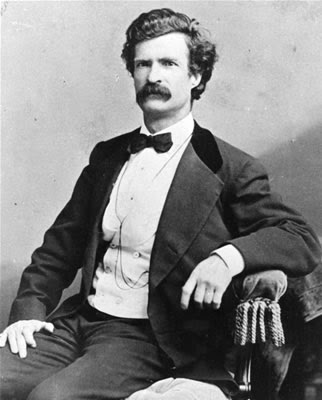 Samuel Langhorne Clemens (who would one day be known as Mark Twain), the sixth child of John Marshall Clemens and Jane Lampton was born in Florida, Missouri, on 30 November 1835. In 1839, the family moved to their Hill Street Home (it is now a Mark Twain museum), in Hannibal, situated on the bank of the Mississippi river and a frequent stop for steam boats.

Due to poor health, Samuel spent most of his childhood inside the house. When he was 9, his health improved and he was allowed to play outside with other children. He also attended a private school in Hannibal. He had to leave in 1847 to get a job because the death of his father left the family in a precarious financial situation. He started working for several newspapers and magazines in New York, Philadelphia and St. Louis. He enjoyed writing and also started writing stories and novels.

In St.Louis he became a river’s pilot apprentice, getting his license in 1858. Part of his job was to sound the depths of the water to know when they were safe for passage. This action is called “mark twain”, which means safe to navigate. The term was chosen by Samuel Clemens as his pen name in 1863. Life on the boat and river also provided lots of inspiration and material for his future work.

When the Civil War broke out in 1861, access to the Mississippi was limited, which brought river trade to a halt. So Samuel started to work for several newspapers across America. He travelled the country and went abroad to Europe, visiting Italy, France, Greece, and the Holy Land. He narrates his experience in the Innocents Abroad (1869). In 1870 Mark Twain married Olivia Langdom and the couple had 4 children. Sadly, only three survived infancy and two died in their twenties. Their only surviving child was a daughter called Clara. Although the family travelled often, their home was in Hartford, in Connectict.

Mark Twain wrote numerous stories, novels and essays and started to gain fame as a writer. Among his most famous works are The Adventures of Tom Sawyer (1876) and The Adventures of Huckleberry Finn (1885). Although they are sometimes still labeled as racist, Mark Twain was against slavery and any form of injustice. He simply described life as it was at the time and highlighted the irrationality of human beings and how absurd some social and political norms are.

Although Mark Twain made a lot of money through his writing, he also lost of a lot due to a series of bad financial investments. To solve his financial problems and pay off his debts, he embarked on a lecture tour around the world. Mark Twain died on 21 April 1910 in Reading, Connectict. He is buried beside his wife and children in the Woodlawn Cemetery in Elmira, New York State.