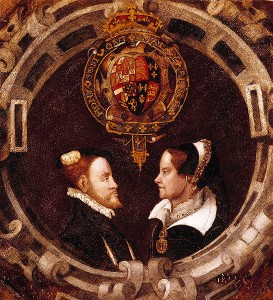 On Wednesday, 25 July 1554, Mary I of England married Philip of Spain at Winchester Cathedral. The cathedral, which was decorated with rich tapestries, was packed with courtiers and dignitaries, while the common people were waiting outside. Philip, preceded by his nobles, was the first two arrive, at about 10am. He then went to sit in a side-chapel where he waited for Mary. The Queen, with her Privy Council, ladies and peers, arrived half an hour later wearing a French style dress made of “rich tissue with a border and wide sleeves, embroidered upon purple satin, set with pearls of our store, lined with purple taffeta”*. Her train was borne by Lady Margaret Douglas and the Marchioness of Winchester.

Philip instead was “elegantly attired in one of the outfits she** had sent him, a full-length robe of cloth-of-gold lined with crimson satin and banded with crimson velvet and pearl buttons, with matching doublet and breeches”***. As the Queen entered through the west door into the choir, Philip went to join her and, together, they ascended the five steps and knelt in front of Bishop Gardener. The Bishop started the service by announcing that Charles V had ceded the kingdoms of Naples and Jerusalem to Philip, who would now become, thanks to his marriage, King of England too. He then officiated the ceremony, both in Latin and English. The Earls of Pembroke, Derby and Bedford gave the bride away on behalf of the nation, while the ring that Philip put on her finger was a plain hoop of gold. Mary had chosen that ring because that’s how maidens were married in old times.****

“The Earls of Derby and Pembroke, bearing swords of honour, led Mary and Philip, who walked hand in hand, through the choir to the high altar, Their Majesties processing under a canopy of estate borne by four knights.”*** Once they were back at their places, Gardiner celebrated high mass. When the service was over, the Garter King of Arms announced, to the sound of trumpets, the titles of Mary and Philip in Latin, French and English: “Philip and Mary, by the grace of God, King and Queen of England, France, Naples, Jerusalem, Ireland, Defenders of the Faith, Princes of Spain and Sicily, Archdukes of Austria, Dukes of Milan, Burgundy and Brabant, Counts of Habsburg, Flanders and Tyrol.”*

At 3 o’clock, the couple left the cathedral amid the sound of fanfares and the shouts of the people, who congratulated them and wished them joy. They went to Wolvesey Palace where a sumptuous banquet was awaiting them. The banquet, which lasted three hours, was held in the East Hall, which had been decorated with hangings of silk and cloth-of-gold for the occasion. While the royal couple ate (Mary off gold plates while Philip off silver ones), minstrels sang and royal heralds distributed alms to the poor. Then, the couple started the dances and, at nine, they retired to their private rooms. Each of them ate alone in their own room and then met again for the public bedding ceremony, which was attended only by a few selected courtiers. After Gardiner blessed the bed, Mary and Philip were left alone, for the first time, to consummate the marriage.

Notes:
* Mary Tudor: The First Queen by Linda Porter
**she: Mary I
*** The Children of Henry VIII by Alison Weir
**** Chronicle of Queen Jane and Two Years of Queen Mary