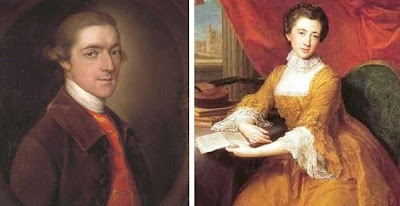 Georgiana, Duchess of Devonshire, may have had an unhappy marriage, but her parents’ union was a different story altogether. Margaret Georgiana Poyntz first met the dashing but shy John Spencer in 1754. He was tall, with deep-set eyes and thin lips, and Georgiana soon fell for him. Luckily for her, the feeling was mutual. John soon began courting the auburn-haired, brown-eyed seventeen year old Georgiana, but was too timid to pop the question.

The occasion presented itself a year later. It was almost summer and both the Spencers and the Poyntzs had decided to spend a week at Wimbledon Park. Everyone was eagerly waiting for John to propose, but he was too scared of being refused. Of course everyone else knew that Georgiana would happily say yes, but lovers are always nervous when about to propose.

He waited until the very last moment, when the carriage was ready to leave. He draw her aside and gave her a diamond and ruby golden ring inscribed with the words “Mon Coeur Est Tout A Toi. Garde Le Bien Pour A Moi*”. How sweet is that? Georgiana enthusiastically accepted both the ring and the proposal and for the rest of their lives they never “for one instant repented**” their lot.

Notes:
* My heart is all yours. Guard it well for me.
** Years later, Lady Spencer told David Garrick, “I verily believe we have neither of us for one instant repented our lot from that time to this.”