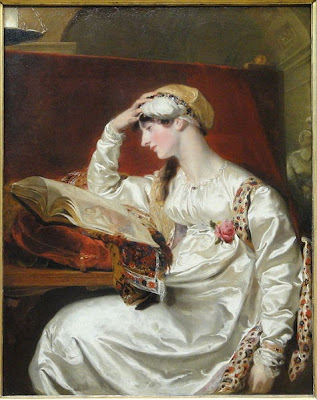 Sir Thomas Lawrence worked on his painting, Mrs Jens Wolff, for more than 12 years. In 1815, when it was finally completed, it was exhibited at the Royal Academy, where it held the place of honour. It was also the only portrait of a woman at that exhibition. The sitter, Isabella Wolff was one of Lawrence’s muses. She was also rumoured to have been one of his lovers.

Mrs Wolff is shown in a Grecian pose, reading a book open at a page featuring an image of a sibyl (an ancient prophetess and oracular seer). Critics have suggested that her depiction as a sybil represents the role she played in Lawrence’s life. The painter, in fact, often asked her opinion and trusted her judgment. But who was Isabella Wolff?

Isabella Wolff was the wife of Jens Wolff, the Danish consul in London. Mr Wolff loved the arts and had built a gallery at his home, Sherwood Lodge, Battersea, where he kept a beautiful collection of casts, most of which were very ancient. He knew many artists, including Sir Thomas Lawrence. The painter met the consul’s wife in 1803, when he was commissioned to paint her portrait.

Isabella was beautiful, clever and accomplished (according to contemporaries, she “talked incessantly of the arts and sciences”) and got along very well with Lawrence. During the sittings for the painting, Isabella and Lawrence became intimate friends, but they never spent much time together in the 26 years they knew each other. Mrs Wolff resided in the country, so the two established a frequent correspondence.

Isabella and her husband separated after 18 years of marriage. Her son, Herman, was rumoured to be Lawrence’s. There is no proof confirming nor denying this. It is known that Lawrence liked Herman and went on trips to Europe with him, but that’s hardly convincing evidence of his alleged paternity. Isabella died in 1829, and Thomas followed her in the grave the following year. The intimacy of their relationship (which may or may not have been sexual), can be clearly seen in this poignant and emotional portrait Lawrence took so long to complete.