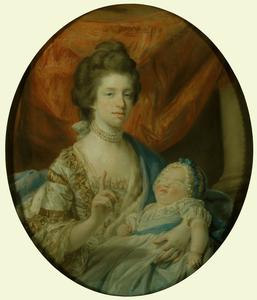 In 1766, Queen Charlotte, wife of King George III, gave birth to her first daughter, Charlotte. At the time, custom forbade royal and noble women from breastfeeding their children themselves, and so the royal couple had to look for a wet-nurse for the Princess Royal. The choice fell upon a certain Frances Muttlebury. In her book Princesses: The Six Daughters of George III, Flora Fraser explains how the wet-nurse was chosen, and what her job entailed:

Shortly after birth the Princess Royal had been whisked upstairs to somewhat different surroundings – the attic story, far from frescoed staircases and damask chambers – to forge an intimate relationship with a mother of two named Mrs Muttlebury, who had been selected as her wet-nurse.

Mrs Muttlebury had been carefully vetted as a milk-cow in August 1766 – not only by Lady Charlotte Finch*, a mother of four herself, but also by Dr Hunter and even by Mr Caesar Hawkins, the King’s Serjeant-Surgeon, and by his brother Mr Pennell Hawkins, Surgeon of the Queen – in preparation for her important task. First she had had to bring for her critics’ inspection the child she was then suckling, then she was asked to show her elder child too, to see if it thrived. Only then, in return for a formidable salary of 200 pounds, and a hundred, after her employment ceased, for life – with the interest of the royal family permenently engaged for her own children – was Mrs Muttlebury trained to devote herself for six months unconditionally to breastfeeding the royal baby. (A limner’s or painter’s wife was put on warning as a substitute wet-nurse should Mrs Muttlebury’s milk fail before the royal infant appeared.)

But Mrs. Muttlebury remained somewhat bewildered by the honour done her. “She told Mama she had not the least notion of anything she was to do,” recorded Lady Charlotte’s daughter Sophia, “and begged her to tell her…” She was surprised to hear she must provide a maid – “I suppose from a notion of having people do everything for her,” commented Miss Sophia. “Mama told her of several other expenses, viz providing her own washing, always wearing silk gowns morning and evening…” The royal baby should come into contact only with superior materials – tussore and brocade and Mechlin lace for ruffles, as supplied by Lady Charlotte.

It was a world unto itself, that of the Princess Royal and Mrs Muttlebury. The wet-nurse was allowed no visitors, not even her own children, to divert her from her duty.

Mrs Muttlebury stopped breastfeeding her charge after six months, but continued working as a nanny for the royal family until 1770, for £200 a year. The Queen also paid school expenses for one of her sons.

Note:
* she was the royal governess.