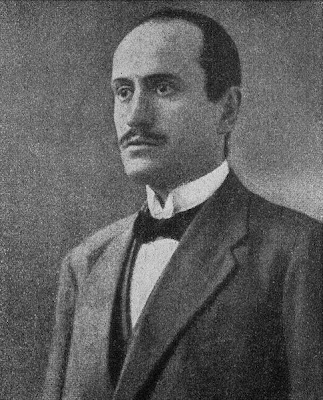 In 1907 Benito Mussolini took an exam that would, if he passed, qualify him to teach French and German. The first part of the exam required the candidates to write an essay in Italian. The topic was: “‘For to lose time irks him most who most knows’ – Dante said. – With what reason did he say it?” Here’s what Mussolini wrote (the translation from a flowery, convoluted, archaic Italian is mine):

The supreme poet’s maxim cannot be understood according to the utilitarian English ethics. A people of merchants and traders considers the use of time in relation to the rapidity of profit. For the brain of a solvent second-hand dealer a dissertation on the metric of ancient rhapsodies or on the research of the primitive Indian culture is a waste of time; the honest stockbroker believes to be “parasites all those who” speculate with thoughts and not with “industrial values”; it will be very difficult for a retired marshal to convince himself that the “Manzoni Studies” by d’Ovidio could “even” be worth the paper on which they are printed.

Conversely – we notice in Italy – since a few years a sort of “pronunciamiento” against this meanly utilitarian concept of time and of human life. There’s a magazine, “Caenobium”, written by a very learned man, that I remember with particular gratitude for the help he gave me in a critic circumstance of my life – and there are some young homines novi – that together with Giuseppe Renzi proclaim from the columns of “Caenobium” a sort of buddhism for the use of the Western world. Their doctrine is an open and sometimes well-conducted attack against the value current morals give to “physical” work. Life should be contemplative and employed in a series of “spiritual pleasures”.

I don’t want to discuss here the value of this conception. It can be another “sign of the times” but I very much fear that it will find some followers. To be “contemplative” without risking the penal code, you need to have a private income of at least 50 lire a day, otherwise you will be considered a “vagabond”. Moreover, the traditional bourgeois ethics will never welcome in its bosom, however spacious, a doctrine that, in practice, will result precisely in a “systematic inaction”, therefore in an absolute, huge, waste of time.

At this point, however, I can’t resist the temptation to do a small raid into the land of philosophy. May the ancient and the modern, the supreme and lilliputian philosophers bear no grudges to me if I enter for a little while in their republic. Well, the sentence “to lose time” is absurd, a contradictio in adiecto, when it’s not referred to human life, like a determinate and determinable phenomenon. Withdrawing from all immediate, utilitarian and practical considerations – from the empiricism namely from the enunciation – is it possible to lose time? And those who lose it could lose it not? And as an humorous appendix, if time can be lost, who finds it?

It seems to me that after having conveniently posed the question in its true logical terms it is right to conclude that: it is not possible to lose time, category of the spirit, philosophical notion; it is instead possible, and blameworthy depending on the cases, to neglect the best use of your own life. Utilitarian or idealistic people, builders of bridges or cenobites, physical workers or ascetics, they can’t however differ from giving a supreme value to time in relation to our own life. One can disagree on the more or less value of the use of this time, but time in itself is life. Without the notion of space and time we wouldn’t know we existed.

To lose time only means to partially or completely renounce your own life. Who feels this and is forced by events to inactive vegetation feels an acute hurt. Dante’s verse is the result of meditations on the value and brevity of human life. Nature that arranges time can economize the effort but humans can’t. To lose time or more exactly to lose some energies is a crime, it is a crazy dissipation of an incalculable treasure. The damage produced by those who beastly vegetate falls back on the offspring. It is a sort of theft which everyone can regret.

Our life is a brief parenthesis between two eternities. Tomorrow we’ll be no more. Others will pass through these “fragrant hills” and will be shipwrecked in our cities. We’d recommend the oration: Ede, bibe, post mortem nulla voluptas?* This, what else matters? What matter is to live to the full – to spread oneself Gurjan would say – to conquer Nietzsche would say, to spend time not in childish futilities, but to follow an ideal of beauty, of might, of love… to draw from our souls like from a wonderful heptachord all the sounds, all the songs and the new and old harmonies… then – arrived to the last evening – with the calmness of the ancient stoics to descend in the realm of shadows.

His teacher gave Mussolini, for his efforts, a six plus, adding next to it “mentally deranged”.

Oh, and in case you were wondering, he eventually got the qualification to teach French, but not German, despite being convinced to be able to speak it quite well…

Notes:
*Eat, drink, after death there are no pleasures.