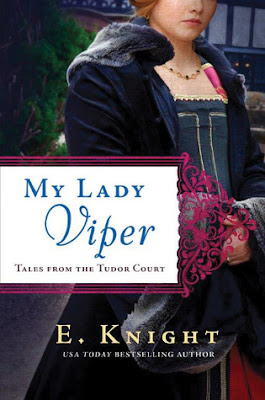 Synopsis:
When Anne Boleyn falls to the executioner’s ax on a cold spring morning in 1536, Anne Seymour knows her family faces peril. As alliances shift and conspiracies multiply, the Seymours plot to establish their place in the treacherous court of King Henry VIII, where a courtier’s fate is decided by the whims of a hot-tempered and fickle monarch.

Lady Anne’s own sister-in-law, Jane Seymour, soon takes Anne Boleyn’s place as queen. But if Jane cannot give King Henry a son, history portends that she, too, will be executed or set aside—and her family with her. In desperation, Lady Anne throws herself into the intoxicating intrigue of the Tudor court, determined to ensure the success of the new queen’s marriage and the elevation of the Seymour family to a more powerful position. Soon her machinations earn her a reputation as a viper in a den of rabbits. In a game of betrayal and favor, will her family’s rise be worth the loss of her soul?

I don’t know about you, but I hope the first person trend in historical fiction will disappear soon. It’s been over done. And I’m really tired of it. It’s too restricting. I’m an omniscient reader. I want to know everything that’s going on in the world a writer has created for me, what every character does, thinks, and feels. The first person narrator can tell me only what she experiences and what she thinks other believe and feel. It’s hard for me to get into that.

I know that first person narration is supposed to let readers better identify and empathise with the protagonist. But that only works when the protagonist is strong, well-rounded, and intriguing. Anne Stanhope Seymour, sister-in-law of Queen Jane Seymour and aunt-by-marriage of her son Edward, is simply not an interesting enough character to keep the reader glued to listen to her story.

I hoped it wold be different. I love reading historical fiction novels told by characters that are usually relegated to the sidelines. They often offer a different perspective on well-known historical events. Anne, as wife of Edward Seymour and a relative by marriage of the Tudors, was at the heart of the court and its intrigues. Her family faced all sorts of perils.

She’s supposed to throw herself deep into these intrigues, but in truth, she doesn’t do much, apart from pointing pretty women in the King’s direction, hoping he’ll either bed or marry them. The rest of the time she’s busy seeking revenge on the people who badly abused her (we are told she plays a part in their downfall but how exactly is never revealed – so much for intrigue) and pining over her loves for her husband and her lover. Problem is, she never falls hard for either of them, so even the romance aspect of the novel is pretty lukewarm.

In the end, even though Anne Stanhope Seymour is the protagonist of the novel, to the reader she still feels more like a bystander. That’s why I would have much preferred the third person narration. There is so much going on in this story but, because Anne tells it, we only get a glimpse of it. And it’s probably not even the most interesting glimpse either.

Having said that, the writing is beautiful. It’s what kept me coming back to this book. Knight has a wonderful way with words. The world she conjures up is so vivid. She just needs to let her heroines take a more active role in their own stories.

I know that would result in historical inaccuracies. Tudor women were usually pawns with no will of her own. At least they were not allowed to express any will of their own. But My Lady Viper, like all historical novels, already has its fair share of inaccuracies. Might as well have added one or two more to make the story more engaging.

Summary:
Beautifully written, My Lady Viper suffers from the use of the first person narration. The protagonist, Lady Stanhope Seymour, is just not interesting enough to pull it off.

Available at: Amazon.com and Amazon UK