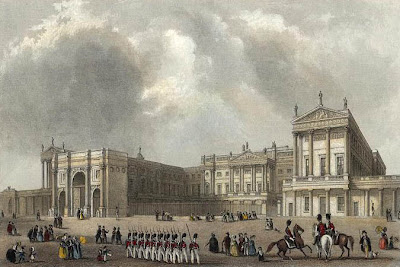 I was just browsing the June 1835 edition of The Lady’s Magazine when I came across an article about the then newly built Buckingham Palace. Here it is:


This is the legitimate title, we say, for the palace reared at the west end of the Royal Park of St. James’s, upon the foundation of a Duke of Buckingham now forgotten, and only honoured by the adoption of it by George III. as his “Queen’s House.” To ancient companions of the “G. G. and S. Robinson,” that red brick “house” was delightful, along with all the simplicity that attended it:

We have now only to regard the completion of the new building, after so many variations in its erection, as it may now become for the reception of the court and fashionables; and to this effect we must, like our contemporaries, apply to the “sic cos uou nobis” principle.

The principal entrance door, in the centre of the building, opens into the grand hall, which extends to the right and left, but the length does not exceed one-third of the breadth; it is tesselated with white and gray veined marble, and surrounded on three sides by a flight of seven steps, which support groups of white marble double columns. Ascending the steps which face the entrance, the sculpture gallery is reached, extending 160 feet along the centre of the palace; the ceiling is supported by nine double columns, the floor inlaid with oak in devices; and at the extreme right is a circular alcove, with a mosaic star in coloured woods, containing the king’s cipher. The centre door of the sculpture gallery leads to a large oblong room, with a semicircular projection, containing five long windows, looking into the gardens. The room is fitted up with bookcases of gilt trellis-work, lined with silk, and massively carved rosewood library tables; it is destined for the king’s council room.

On the left of the council room are two reading rooms, similarly fitted up with bookcases, the doors of carved mahogany, and the chimney-pieces of yellow marble. Beyond these is the private dining room, which has three windows reaching to the floor; it is coloured a pale sea-green, and is devoid of any ornament except four marble pillars at each end. Returning to the council room, on the right is one of the queen’s morning rooms, hung with dovecolour and flock paper, without moulding or cornice, and the ceiling perfectly plain. This was originally destined for George IV’s bed chamber. Adjoining is the queen’s sitting room, with three long windows, and hung from the ceiling to the floor with pale gray paper in shades, richly figured in wreaths of bright flowers, with birds and insects; the chimney-pieces are of white marble, and extremely small in proportion to the room: a peculiarity which attaches to all the fire-places throughout the palace.

The doors, of handsomely carved mahogany, lead to another sitting room nearly similar, beyond which is an ante-room and the bath room. The latter is very small; and the bath itself, which is of very limited dimensions, is made merely of painted metal to resemble marble. It is singular to see this apartment fitted up in such a common style, as in all foreign palaces the bath has been an object for the display of classic taste and highly-wrought sculpture. From the bath room a long narrow passage leads to one of the rooms for the ladies in waiting. This is papered down to the floor with a striped paper of deep jonquil-yellow, moulded with black and gold; the glare is extremely disagreeable. Beyond this apartment, in the wing next to the Green Park, is the private entrance for the queen; a very beautiful circular hall, with five windows.

The floor is of white marble, with small squares of black; and it is surrounded by gray marble pillars, the ceiling being tastefully carved. Beyond this hall there are four other waiting rooms, extremely plain and simple in their arrangement. Returning to the queen’s second sitting room, on the right is her majesty’s private staircase to the bed rooms, consisting of five flights of ten steps each, in white marble. The first room on the right is the royal bed chamber; a fine well-proportioned room, but plain in its decoration. Along the gallery are fourteen rooms of different sizes, destined for her majesty’s wardrobe rooms. Immediately over the sculpture gallery, on the drawing-room floor, is the picture gallery, also measuring 160 feet in length.

It is lighted from the top by seventeen large square skylights, on each side of which is a row of the same number of circular lights in figured ground glass. The cornice descends in deep points of most elaborate work, which is also carried between the lights; and nothing can exceed the chaste grandeur of effect in this extensive ceiling, which will form an exquisite contrast to the manifold tints and gorgeous frames of the pictures when they are placed here. The floor is of oak inlaid, and there are five fire-places with chimney-pieces of white marble, each ornamented by an altorelievo bust of one of the old masters, supported by two angels. The centre door of the picture gallery opens into the drawing room, with a bowed front towards the garden. The floor is of light-coloured woods, inlaid in large wreaths of rosewood, each containing the king’s cipher.

The ceiling, richly carved and gilt, is supported by scagliola pillars of brilliant purple; between these, high looking-glasses, with arched tops, are placed, which descend to the floor, and the intervals are filled with yellow silk. This is a very beautiful apartment, although not large; and the view from the windows, towards the gardens, is extremely cheerful. To the right and left of the drawing rooms are folding doors of looking-glass, with mahogany and gilt frames; the door on the right opens to the music room, which has three long windows looking to the garden. This room is surrounded by flat scagliola pillars of a rich crimson hue, the capitals carved and gilt; between the pillars, the spaces are hung with embossed silk of gold colour and white: the ceiling is magnificent, carved and gilt in rays round the chains of the three lustres: there are two white marble chimney-pieces, handsome doors of looking-glass, and the floor will be covered with crimson Axminster carpets, figured in bright wreaths.

The ball room is on the left of the drawing room, and has four windows, which are to be hung with crimson velvet curtains. The walls are decorated with round pillars of beautiful crimson scagliola, surmounted by gilt capitals; the space between having figured silk hangings, to correspond with the two foregoing rooms. The floor is of oak, inlaid with a deep border of flowers in rosewood; the ceiling elaborately decorated and gilt. The ensemble of this room by candlelight is really splendid beyond description; and if some marble figures were placed so as to relieve the heavy richness of the crimson and yellow, it would be as perfect as can be conceived. Next to the gorgeous ball room is the dining room; a calm, gravely-tinted apartment, after viewing the others.

It has three windows, and at the end a deep recess for the sideboard. The ceiling is an elliptic arch, carved in three bold rose ornaments, and descending on the walls in deep carved points; between these are medallions, bearing the king’s cipher. The walls are painted a pearl colour, and the ornaments white; altogether it is scarcely rich enough for the banqueting room of a palace. Beyond the dining room are four rooms for the table decorators, and a private staircase leading to the culinary apartments below. Descending to the entrance hall again, on the left, is placed the principal staircase, which is broad, and for the first twenty steps, single. The landing-place, which is lighted from above, then divides into a double staircase of twenty-nine steps of white marble, like the first flight; the walls above are beautifully decorated with gilt wreaths and sculptured entablatures.

This is the entrance which will be used by those who attend the levees and drawing-rooms. The first ante-room is small and plain, containing nothing worthy of remark. The second room is the front saloon; a splendid, but somewhat sombre apartment, from its being hung with dark laurel-green satin, striped and watered; the compartments are marked by carved divisions. Next is the throne room, where the company will be received. This has four long windows opening on a balcony, and two fire-places. The ceiling is most splendidly carved and gilt to a great depth; the second range of cornice being decorated with painted coats of arms, about two feet high and four feet asunder. These bear, on coloured fields, the three lions passant, the white horse of Hanover, the English Hon rampant, and the harp of Ireland.

The four are repeated all round the cornice, which thus looks like an immense golden zone studded with coloured gems. Beneath this is a basso-relievo entablature of sculptured groups. Between the third and fourth windows a sort of division is formed by projections from each wall, which are met at top by a cornice. From each side an angel, in white marble, holds the ends of golden garlands, which hang, detached, in festoons along this cornice, and support in the centre a large medallion bearing the king’s cipher. Under this will be placed the throne. The walls of the throne room are hung with the richest crimson satin, striped and watered, the divisions marked with very broad gold mouldings.

In addition to the rooms described, there are various suites of apartments for persons attached to the royal household; but there is nothing uncommon in their distribution or decoration worthy of comment. The view from the back of the palace extends over the beautiful grounds, and admirable rus in urbe westward; and from the front windows, through the arches of the marble gateway, the vista of St. James’s Park produces a singularly striking effect, such as cannot be imagined but by those who have seen it.