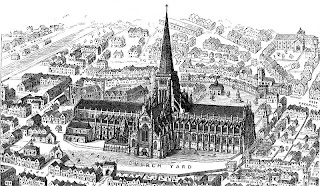 St Paul’s Cathedral is one of the most famous cathedrals in the world. But the gorgeous church we see today, designed by Christopher Wren in the seventeenth century, is very different from the Old St Paul’s that was destroyed in Great Fire of London in 1666. In his book, The Town, Leigh Hunt tells the story of the old church:

AS St. Paul’s Churchyard is probably the oldest ground built upon in London, we begin our perambulations in that quarter. The cross which formerly stood north of the cathedral, and of which Stowe could not tell the antiquity, is supposed by some to have originated in one of those sacred stones which the Druids made use of in worship; but at least it is more than probable that here was a burial-ground of the ancient Britons; because when Sir Christopher Wren dug for a foundation to his cathedral, he discovered abundance of ivory and wooden pins, apparently of box, which are supposed to have fastened their winding-sheets. The graves of the Saxons lay above them, lined with chalk-stones, or consisting of stones hollowed out: and in the same row with the pins, but deeper, lay Roman horns, lamps, lachrymatories, and all the elegancies of classic sculpture. Sir Christopher dug till he came to sand and sea-shells, and to the London clay, which has since become famous in geology; so that the single history of St. Paul’s Churchyard carries us back to the remotest periods of tradition.

The first authentic account of the existence of a Christian church on this spot is that of Bede, who attributes the erection of it to King Ethelbert, about the year 610, soon after his conversion by St. Augustine. The building, which was probably of wood, was burned down in 961, but was restored the same year—a proof that, notwithstanding the lofty terms in which it is spoken of by the old historian, it could not have been of any great extent. This second church lasted till the time of William the Conqueror, when it, too, was destroyed by a conflagration, which burned the greater part of the city. Bishop Maurice, who had just been appointed to the see, now resolved to rebuild the cathedral on a much grander scale than before, at his own expense. To assist him in accomplishing this object, the King granted him the stones of an old castle, called the Palatine Tower, which stood at the mouth of the Fleet River, and which had been reduced to ruins in the same conflagration.

The Bishop’s design was looked upon as so vast, that “men at that time,” says Stowe, “judged it wold never have bin finished; it was then so wonderfull for length and breadth.” This was in the year 1087; and the people had some reason for their astonishment, for the building was not completed till the year 1240, in the reign of Henry the Third. Some even extend the date to 1315, which is two hundred and twenty-eight years after its foundation; but this was owing rather to repairs and additions than to anything wanting in the original edifice. The cathedral thus patched, altered, and added to, over and over again, with different orders and no orders of architecture, and partially burned, oftener than once, remained till the Great Fire of London, when it was luckily rendered incapable of further deformity, and gave way to the present. It was, indeed, a singular structure, and used for singular purposes.

“The exterior of the building,” says an intelligent writer, himself an architect, “presented a curious medley of the architectural style of different ages. At the western front Inigo Jones had erected a portico of the Corinthian order; thus displaying a singular example of that bigotry of taste, which, only admitting one mode of beauty, is insensible to the superior claims of congruity. This portico, however, singly considered, was a grand and beautiful composition, and not inferior to anything of the kind which modern times have produced: fourteen columns, each rising to the lofty height of forty-six feet, were so disposed, that eight, with two pilasters placed in front, and three on each flank, formed a square (oblong) peristyle, and supported an entablature and balustrade, which was crowned with statues of kings, predecessors of Charles the First, who claimed the honour of this fabric. Had the whole front been accommodated to Roman architecture, it might have deserved praise as a detached composition; but though cased with rustic work, and decorated with regular cornices, the pediment retained the original Gothic character in its equilateral proportions, and it was flanked by barbarous obelisks and ill-designed turrets.

“The whole of the exterior body of the church had been cased and reformed in a similar manner, through which every detail of antiquity was obliterated, and the general forms and proportions only left. The buttresses were converted into regular piers, and a complete cornice crowned the whole: of the windows, some were barely ornamented apertures, whilst others were decorated in a heavy Italian manner, with architrave dressings, brackets, and cherubic heads. The transepts presented fronts of the same incongruous style as the western elevation, and without any of its beauties.”

In its original state, however, old St. Paul’s must have been an imposing building. Its extent at least was very great. The entire mass measured 690 feet in length, by 130 in breadth, and it was surmounted by a spire 520 feet high. The spire was of timber. It bore upon its summit not only a ball and cross, but a large gilded eagle, which served as a weathercock. But the church having been nearly burned to the ground in June, 1561, owing to the carelessness of a plumber who left a pan of coals burning near some wood-work while he went to dinner, it was hastily restored without the lofty spire: so that in Hollar’s engraving, given by Dugdale, of the building as it appeared in 1656, it stands curtailed of this ornament. Only the square tower, from which the spire sprang up, remains. “The old cathedral,” says Mr Malcolm, on the authority of a note with which he was furnished by the Rev. Mr Watts, of Sion College, “did not stand in the same direction with the new, the latter inclining rather to the south-west and north-east; and the west front of the Old Church came much farther towards Ludgate than the present.”

When Jones began the repairs and additions of which his portico formed a part, in 1633, the rubbish that was removed was carried, Mr Malcolm informs us, to Clerkenwell fields, where, he suggests, “some curious fragments of antiquity may still remain.” The very beauty of this portico, surmounted with its strange pediment and figures, and dragging at its back that heap of deformity, completed the monstrous look of the whole building, like a human countenance backed by some horned lump. But this was nothing to the moral deformities of the interior. Old St. Paul’s, throughout almost the whole period of its existence, at least from the reign of Henry the Third, was a thoroughfare, and a “den of thieves.” The thoroughfare was occasioned probably by the great circuit which people had been compelled to make by the extent of the wall of the old churchyard—a circumference a great deal larger than it is at present. […]

“The notices of encroachments on St. Paul’s, in the same reign*, are equally curious. The chantry and other chapels were completely diverted from their ancient purposes; some were used as receptacles for stores and lumber; another was a school, another a glazier’s shop; and the windows of all were, in general, broken. Part of the vaults beneath the church was occupied by a carpenter, the remainder was held by the bishop, the dean and chapter, and the minor canons. One vault, thought to have been used for a burial-place, was converted into a wine-cellar, and a way had been cut into it through the wall of the building itself. (This practice of converting church vaults into wine-cellars, it may be remarked, is not yet worn out. Some of the vaults of Winchester Cathedral are now, or were lately, used for that purpose.)

The shrowds and cloisters under the convocation house, ‘where not long since the sermons in foul weather were wont to be preached,’ were made ‘a common lay-stall for boardes, trunks, and chests, being lett oute unto trunkmakers, where, by meanes of their daily knocking and noyse, the church is greatly disturbed.’ More than twenty houses also had been built against the outer walls of the cathedral; and part of the very foundations was cut away to make offices. One of those houses had literally a closet dug in the wall; from another was a way through a window into a wareroom in the steeple; a third, partly formed by St. Paul’s, was lately used as a play-house; and the owner of the fourth baked his bread and pies in an oven excavated within a buttress.

Old St. Paul’s was famous for the splendour of its shrine and for its priestly wealth. The list of its copes, vestments, jewels, gold and silver cups, candlesticks, etc., occupies thirteen folio pages of the Monasticon. The side aisles were filled with chapels to different saints and the Virgin; that is to say, with nooks partitioned off one from another, and enriched with separate altars; and it is calculated, that, taking the whole establishment, there could hardly be fewer than two hundred priests.