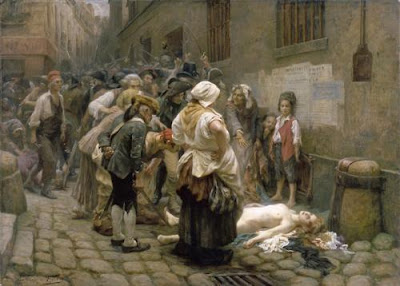 In his book, Madame De Lamballe, George Bertin shares the official report of what was found in the clothes of the just murdered Princess:

On the 3rd of September, in the year 1792, the fourth year of Liberty and Equality, there appeared before the Permanent Committee of the district of the Quinze-Vingts Sieurs Jacques Charles Hervelin, drummer of the gunners of the district of the Halles, former battalion of Saint Jacques de la Boucherie, dwelling number 3 Rue de la Savonnerie, opposite the little street of Avignon au Cadran Bleu; Jean Gabriel Quervelle, cabinet-maker, at the corner of the Rue du Fauxbourg Saint-Antoine and the Rue Saint Nicolas, Maison a Bouneau; Antoine Pouquet, gunner of the district of Montreuil, number 25 Rue de Charonne, at Sieur Vicq’sj and Pierre Ferrie, dealer in fancy goods, number 39 Rue Popincourt. These men were bearers of the headless body of the ci-devant Princesse de Lamballe, who had just been killed at the Hotel de la Force, and whose head was carried by others on a pike through the principal streets. They stated that in her clothes they had found the following articles—namely, a small volume bound in red morocco with gilt edges, entitled ‘ Imitation de J.-C; a red morocco portfolio; a case containing eighteen national assignats ‘ of five livres each; a gold ring with a bezel of changeable blue stone, in which was some blond hair tied in a love-knot with these words above it: ‘ Whitened through misery ‘; an English bulb; a small ivory pencil-holder containing a gold pen with two small gold rings; a small two-bladed knife, the handle of tortoise-shell and silver; a corkscrew of English steel; a small pair of pincers of the same metal; a small card attached to a vignette bearing undecipherable words; a bit of paper on which was written a laundry list; two small glass flasks used for inkstands, with gold tops, and some sticks of different colored sealing-wax; a sort of double-faced image, on one side representing a bleeding heart surrounded with thorns and pierced by a dagger, with these words below: ‘ Cor Jesu, salva nos, perimur,’ on the other a bleeding heart with a fleur-de-lis above, and below the words: ‘ Cor Mariae unitum cordi Christi’; a medallion on light blue cloth, on which was painted a bleeding heart pierced by a dagger, embroidered in blue silk. These articles were verified by us in the presence of the above-named and the undersigned to whom we gave them all, in order that they might be laid before the National Assembly. This the undersigned promised and swore should be done. All this having been arranged they gave us a written receipt and signed with us, commissioners.
Caumont, Borie, Savard, Commissioners. Renet, Clerk of the Secretary.