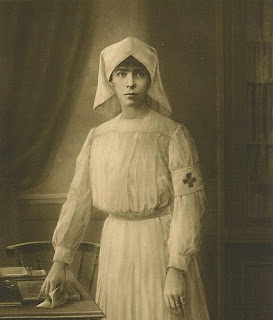 During World War I, the King and Queen of the Belgians did everything they could to help their people. While King Albert was busy leading his troops into battle, Queen Elizabeth, at the head of the Red Cross, personally took care of the wounded soldiers. Their wounds and sufferings were horrific but the Queen never shrank from what she considered to be her duty. She visited almost all the hospitals in Belgium, helping to dress the soldiers’ wounds and take care of them in any way she could. She also had sweet and soothing words for every soldier, which helped cheer their moods:

“As the field hospitals travelled from place to place where they were most needed, the Queen did her utmost, and inspired others to do their utmost, too, to find suitable buildings in which they could carry on their magnificent work. She was intensely anxious that there should be full equipment for both the wounded and the staff. Often bedding was impossible to procure in sufficient quantity, and the wounded slept on straw. Her Majesty organized house-to-house collections for bedding, and, when the hospital was at Fumes, she gave twenty beds with spring mattresses for the use of the most serious cases.

Once when it had proved exceptionally difficult to get supplies, the Queen, attended by only one lady-in-waiting, went from house to house to see what could be obtained. The inhabitants of the place were for the most part more than willing to give, but the exigencies of war had left them with little. Few recognized the slender, gentle-voiced lady, who pleaded for the wounded soldiers, as their Queen. One good woman, who had given all but the bed on which she herself slept, was so overcome when she learned of her visitor’s identity, that she hurried after her up the street, dragging her one mattress behind her as a final offering!

The Queen visited the hospital at Furnes twice regularly every week, and her visits were made without ceremony of any kind. She was never accompanied by more than one lady and, as a rule, by a Belgian medical officer. Her interest in the patients was felt and appreciated by everyone in the hospital. Her thorough knowledge of surgery and medicine made her able to understand and appreciate the methods of nursing, and she never failed to pay due tribute to the staff for their efforts and for the extraordinary ingenuity with which they carried out serious operations with wholly inadequate materials.

From bed to bed the Queen would pass, a slight figure always plainly clad, usually in black, with a word for each of the men who had suffered in her country’s cause. To each she spoke— to Belgians, French, and Germans (for there were usually a few Germans brought in with the rest), as Her Majesty made no distinction. They were suffering ; they had made the supreme sacrifice for what each believed to be the right, and in that place of pain at least there was no room for bitterness. 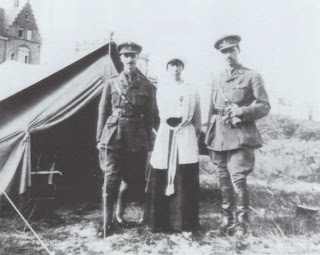 At a later stage in the War, the Queen took a deep interest in the marvels of plastic surgery, which enabled so many poor fellows to take up their work in the world after leaving the hospital. At one hospital some very severe facial cases were being treated, and the head surgeon, anxious to spare the Queen some terrible sights, begged her not to visit that particular ward. Her Majesty was not, however, to be deterred by the awful disfigurements. “They suffered for their country,” she remarked, “and the Queen of that country should be the last to shrink from them.” She spoke to each man in turn, pressing his hand in kindly sympathy before she turned away.

As all the world knows, the Red Cross was no defence against the enemy’s fire, Germany tried to excuse her shelling of hospitals on the ground that war must be conducted in a logical manner. Therefore, said the enemy, to wipe out the medical staffs, who help to fit men once again for the battlefield, was quite a logical feature of the campaign, just as, of course, German officers considered it was “logical” to take cover behind a living shield of Belgian women. In one instance the Queen was actually visiting a hospital when it was set on fire during an air-raid. The staff were naturally anxious to get Her Majesty out of the buildings into a place of safety, but the Queen refused firmly to consider her own security and took part in assisting the wounded into cover.

When the raid was over and things had quietened down, the doctor in charge of the hospital ventured to compliment Her Majesty on her courage, “My courage!” answered the Queen with the smile that had grown so rare in those days, “In what way did it differ from that of your nurses? When you make your report, if my presence is mentioned, it must be as one of them—no more.””

The Queen didn’t forget the soldiers’ families either. She organized events to raise money for their wives and children, and offered them a few consoling words whenever she met them. As she travelled from one hospital to the other, Queen Elizabeth often met with refugees who were fleeing their homes carrying their few poor possessions of their backs or on a small carts. There was nothing she could do for them, but she still stopped to speak to them, offering a few words of comfort, caressing a child and donating a few coins to a poor woman.

Queen Elizabeth also created the Queen’s Orchestra, which was formed by musicians belonging to various regiments. They would play on the different war fronts to encourage and cheer the soldiers. The Queen didn’t care to be recognized for all her efforts. Very often, she never disclosed her identity to the people she helped. She was an amazing, heroic woman who shared in the suffering and privations of their countrymen and women, which gained her their respect.