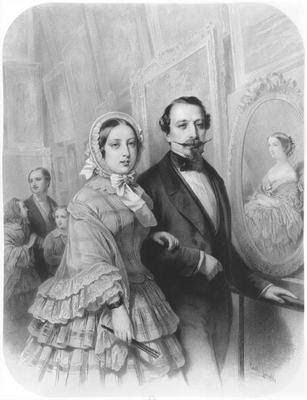 In 1855 Napoleon III, Emperor of the French visited England. Afterwards, Queen Victoria wrote her opinion of the Emperor in a memorandum:

The recent visit of the Emperor Napoleon III to this country is a most curious page of history, and gives rise to many reflections. A remarkable combination of circumstances has brought about the very intimate alliance which now unites England and France, for so many centuries the bitterest enemies and rivals, and this, under the reign of the present Emperor, the nephew of our greatest foe, and bearing his name, and brought about by the policy of the late Emperor of Russia, who considered himself as the head of the European Alliance against France!

In reflecting on the character of the present Emperor Napoleon, and the impression I have conceived of it, the following thoughts present themselves to my mind:

That he is a very extraordinary man, with great qualities there can be no doubt—I might almost say a mysterious man. He is evidently possessed of indomitable courage, unflinching firmness of purpose, self-reliance, perseverance, and great secrecy; to this should be added, a great reliance on what he calls his Star, and a belief in omens and incidents as connected with his future destiny, which is almost romantic—and at the same time he is endowed with wonderful self-control, great calmness, even gentleness, and with a power of fascination, the effect of which upon all those who become more intimately acquainted with him is most sensibly felt.

How far he is actuated by a strong moral sense of right and wrong is difficult to say. On the one hand, his attempts at Strasbourg and Boulogne, and this last after having given a solemn promise never to return or make a similar attempt—in which he openly called on the subjects of the then King of the French to follow him as the successor of Napoleon, the Coup d’État of December 1851, followed by great … severity and the confiscation of the property of the unfortunate Orleans family, would lead one to believe that he is not. On the other hand, his kindness and gratitude towards all those, whether high or low, who have befriended him or stood by him through life, and his straightforward and steady conduct towards us throughout the very difficult and anxious contest in which we have been engaged for a year and a half, show that he is possessed of noble and right feelings.

My impression is, that in all these apparently inexcusable acts, he has invariably been guided by the belief that he is fulfilling a destiny which God has imposed upon him, and that, though cruel or harsh in themselves, they were necessary to obtain the result which he considered himself as chosen to carry out, and not acts of wanton cruelty or injustice; for it is impossible to know him and not to see that there is much that is truly amiable, kind, and honest in his character. Another remarkable and important feature in his composition is, that everything he says or expresses is the result of deep reflection and of settled purpose, and not merely des phrases de politesse, consequently when we read words used in his speech made in the City, we may feel sure that he means what he says; and therefore I would rely with confidence on his behaving honestly and faithfully towards us. I am not able to say whether he is deeply versed in History—I should rather think not, as regards it generally, though he may be, and probably is, well informed in the history of his own country, certainly fully so in that of the Empire, he having made it his special study to contemplate and reflect upon all the acts and designs of his great uncle. He is very well read in German literature, to which he seems to be very partial. It is said, and I am inclined to think with truth, that he reads but little, even as regards despatches from his own foreign Ministers, he having expressed his surprise at my reading them daily. He seems to be singularly ignorant in matters not connected with the branch of his special studies, and to be ill informed upon them by those who surround him.

If we compare him with poor King Louis Philippe, I should say that the latter (Louis Philippe) was possessed of vast knowledge upon all and every subject, of immense experience in public affairs, and of great activity of mind; whereas the Emperor possesses greater judgment and much greater firmness of purpose, but no experience of public affairs, nor mental application; he is endowed, as was the late King, with much fertility of imagination.

Another great difference between King Louis Philippe and the Emperor is, that the poor King was thoroughly French in character, possessing all the liveliness and talkativeness of that people, whereas the Emperor is as unlike a Frenchman as possible, being much more German than French in character…. How could it be expected that the Emperor should have any experience in public affairs, considering that till six years ago he lived as a poor exile, for some years even in prison, and never having taken the slightest part in the public affairs of any country? 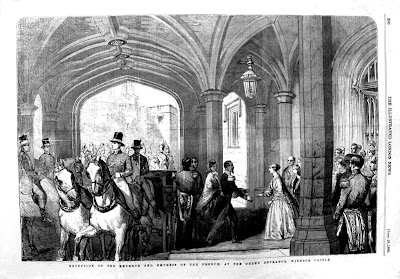 It is therefore the more astounding, indeed almost incomprehensible, that he should show all those powers of Government, and all that wonderful tact in his conduct and manners which he evinces, and which many a King’s son, nurtured in palaces and educated in the midst of affairs, never succeeds in attaining. I likewise believe that he would be incapable of such tricks and over-reachings as practised by poor King Louis Philippe (for whose memory, as the old and kind friend of my father, and of whose kindness and amiable qualities I shall ever retain a lively sense), who in great as well as in small things took a pleasure in being cleverer and more cunning than others, often when there was no advantage to be gained by it, and which was, unfortunately, strikingly displayed in the transactions connected with the Spanish marriages, which led to the King’s downfall and ruined him in the eyes of all Europe. On the other hand, I believe that the Emperor Napoleon would not hesitate to do a thing by main force, even if in itself unjust and tyrannical, should he consider that the accomplishment of his destiny demanded it.

The great advantage to be derived for the permanent alliance of England and France, which is of such vital importance to both countries, by the Emperor’s recent visit, I take to be this: that, with his peculiar character and views, which are very personal, a kind, unaffected, and hearty reception by us personally in our own family will make a lasting impression upon his mind; he will see that he can rely upon our friendship and honesty towards him and his country so long as he remains faithful towards us; naturally frank, he will see the advantage to be derived from continuing so; and if he reflects on the downfall of the former dynasty, he will see that it arose chiefly from a breach of pledges,… and will be sure, if I be not very much mistaken in his character, to avoid such a course. It must likewise not be overlooked that this kindly feeling towards us, and consequently towards England (the interests of which are inseparable from us), must be increased when it is remembered that we are almost the only people in his own position with whom he has been able to be on any terms of intimacy, consequently almost the only ones to whom he could talk easily and unreservedly, which he cannot do naturally with his inferiors. He and the Empress are in a most isolated position, unable to trust the only relations who are near them in France, and surrounded by courtiers and servants, who from fear or interest do not tell them the truth. It is, therefore, natural to believe that he will not willingly separate from those who, like us, do not scruple to put him in possession of the real facts, and whose conduct is guided by justice and honesty, and this the more readily as he is supposed to have always been a searcher after truth. I would go still further, and think that it is in our power to keep him in the right course, and to protect him against the extreme flightiness, changeableness, and to a certain extent want of honesty of his own servants and nation. We should never lose the opportunity of checking in the bud any attempt on the part of his agents or ministers to play us false, frankly informing him of the facts, and encouraging him to bring forward in an equally frank manner whatever he has to complain of. This is the course which we have hitherto pursued, and as he is France in his own sole person, it becomes of the utmost importance to encourage by every means in our power that very open intercourse which I must say has existed between him and Lord Cowley for the last year and a half, and now, since our personal acquaintance, between ourselves.

As I said before, the words which fall from his lips are the result of deep reflection, and part of the deep plan which he has staked out for himself, and which he intends to carry out. I would therefore lay stress on the following words which he pronounced to me immediately after the investiture of the Order of the Garter: “C’est un lien de plus entre nous, j’ai prêté serment de fidélité à votre Majesté et je le garderai soigneusement. C’est un grand événement pour moi, et j’espère pouvoir prouver ma reconnaissance envers votre Majesté et son Pays.” In a letter said to be written by him to Mr F. Campbell, the translator of M. Thiers’s History of the Consulate and Empire, when returning the proof-sheets in 1847, he says “Let us hope the day may yet come when I shall carry out the intentions of my Uncle by uniting the policy and interests of England and France in an indissoluble alliance. That hope cheers and encourages me. It forbids my repining at the altered fortunes of my family.”

If these be truly his words, he certainly has acted up to them, since he has swayed with an iron hand the destinies of that most versatile nation, the French. That he should have written this at a moment when Louis Philippe had succeeded in all his wishes, and seemed securer than ever in the possession of his Throne, shows a calm reliance in his destiny and in the realisation of hopes entertained from his very childhood which borders on the supernatural.

These are a few of the many reflections caused by the observation and acquaintance with the character of this most extraordinary man, in whose fate not only the interests of this country, but the whole of Europe are intimately bound up. I shall be curious to see if, after the lapse of time, my opinion and estimate of it has been the right one.