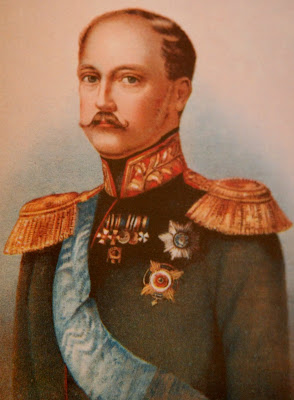 A while ago, I shared with you a letter written by Queen Victoria to her uncle Leopold, King of the Belgians, in which she was discussing Emperor Nicholas I of Russia’s visit to England. The King was very interested in this account and so his niece wrote to him again and told him even more details about the Tzar’s visit and her opinion of him. The letter is quite long, but also very interesting. Here it is:


My Dearest Uncle,—I received your very kind and long letter of the 7th on Sunday, and thank you very much for it. I am delighted that my accounts interested you, and I shall try and give you some more to-day, which you will see come from an unbiassed and impartial mind, and which I trust therefore will be relied upon. The excitement has ceased as suddenly as it had begun, and I am still confused about it. I will go back to where I last left you. The Revue* on the 5th was really very interesting, and our reception as well as that of the Emperor most enthusiastic. Louise** tells me you had a review the same day, and that it also was so hot. Our children were there, and charmed. On the 6th we went with the Emperor and King to the races***, and I never saw such a crowd; again here the reception was most brilliant. Every evening a large dinner in the Waterloo Room, and the two last evenings in uniforms, as the Emperor disliked so being en frac, and was quite embarrassed in it.

On the 7th we took him and the King back here, and in the evening had a party of 260 about. On Saturday (8th) my Angel took the Emperor and King to a very elegant breakfast at Chiswick****, which I for prudence’ sake did not go to, but was very sorry for it. In the evening we went to the Opera (not in State), but they recognised us, and we were most brilliantly received. I had to force the Emperor forward, as he never would come forward when I was there, and I was obliged to take him by the hand and make him appear; it was impossible to be better bred or more respectful than he was towards me. Well, on Sunday afternoon at five, he left us (my Angel accompanied him to Woolwich), and he was much affected at going, and really unaffectedly touched at his reception and stay, the simplicity and quietness of which told upon his love of domestic life, which is very great.

I will now (having told all that has passed) give you my opinion and feelings on the subject, which I may say are Albert’s also. I was extremely against the visit, fearing the gêne, and bustle, and even at first, I did not feel at all to like it, but by living in the same house together quietly and unrestrainedly (and this Albert, and with great truth, says is the great advantage of these visits, that I not only see these great people but know them), I got to know the Emperor and he to know me. There is much about him which I cannot help liking, and I think his character is one which should be understood, and looked upon for once as it is. He is stern and severe—with fixed principles of duty which nothing on earth will make him change; very clever I do not think him, and his mind is an uncivilised one; his education has been neglected; politics and military concerns are the only things he takes great interest in; the arts and all softer occupations he is insensible to, but he is sincere, I am certain, sincere even in his most despotic acts, from a sense that that is the only way to govern; he is not, I am sure, aware of the dreadful cases of individual misery which he so often causes, for I can see by various instances that he is kept in utter ignorance of many things, which his people carry out in most corrupt ways, while he thinks that he is extremely just.

He thinks of general measures, but does not look into detail. And I am sure much never reaches his ears, and (as you observed), how can it? He asked for nothing whatever, has merely expressed his great anxiety to be upon the best terms with us, but not to the exclusion of others, only let things remain as they are…. He is I should say, too frank, for he talks so openly before people, which he should not do, and with difficulty restrains himself. His anxiety to be believed is very great, and I must say his personal promises I am inclined to believe; then his feelings are very strong; he feels kindness deeply—and his love for his wife and children, and for all children, is very great. He has a strong feeling for domestic life, saying to me, when our children were in the room: “Voilà les doux moments de notre vie.” He was not only civil, but extremely kind to us both, and spoke in the highest praise of dearest Albert to Sir Robert Peel, saying he wished any Prince in Germany had that ability and sense; he showed Albert great confidence, and I think it will do great good, as if he praises him abroad it will have great weight.

He is not happy, and that melancholy which is visible in the countenance made me sad at times; the sternness of the eyes goes very much off when you know him, and changes according to his being put out (and he can be much embarrassed) or not, and also from his being heated, as he suffers with congestions to the head. My Angel thinks that he is a man inclined too much to give way to impulse and feeling, which makes him act wrongly often. His admiration for beauty is very great, and put me much in mind of you, when he drove out with us, looking out for pretty people. But he remains very faithful to those he admired twenty-eight years ago; for instance, Lady Peel, who has hardly any remains left. Respecting Belgium he did not speak to me, but to Albert and the Ministers. As for unkindly feeling towards you, he disclaims positively any, saying he knew you well, and that you had served in the Russian Army, etc., but he says those unfortunate Poles are the only obstacle, and that he positively cannot enter into direct communication with Belgium as long as they are employed.

If you could only somehow or other get rid of them, I am sure the thing would be done at once. We all think he need not mind this, but I fear he has pledged himself. He admired Charlotte’s picture. Pour finir, I must say one more word or two about his personal appearance. He puts us much in mind of his and our cousins the Würtembergs, and has altogether much of the Würtemberg family about him. He is bald now, but in his Chevalier Garde Uniform he is magnificent still, and very striking. I cannot deny that we were in great anxiety when we took him out lest some Pole might make an attempt, and I always felt thankful when we got him safe home again. His poor daughter is very ill, I fear. The good King of Saxony remains another week with us, and we like him much. He is so unassuming. He is out sight-seeing all day, and enchanted with everything. I hope that you will persuade the King to come all the same in September. Our motives and politics are not to be exclusive, but to be on good terms with all, and why should we not? We make no secret of it.

Now I must end this very long letter. Ever your devoted Niece,

You will kindly not speak of these details, but only in allgemein say the visit went off very satisfactorily on both sides, and that it was highly pacific.

Notes:
* In honour of the Emperor, a review was held in Windsor Great Park.
** Louise of Orleans, Queen of Belgium
*** At Ascot.
*** Given by the Duke of Devonshire.