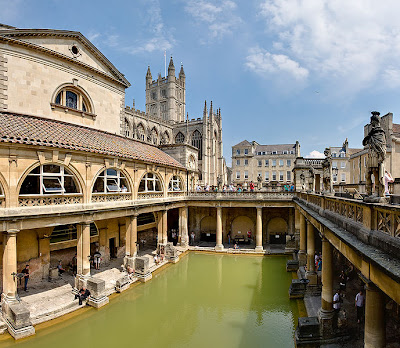 When we think of ancient Rome, one of the first images that comes into our minds is men and women bathing in the thermae. Bathing was an important part of Roman life and culture. The Ancient Romans didn’t go to the thermae just to take a bath, but also to socialize, conduct business, dine with their friends and talk politics. The big thermal complexes were, in fact, a city within a city. The water was supplied by a river or stream, or more commonly, by an aqueduct, and was then heated with a log fire under the floor by slaves. But have you ever wondered who invented the thermae? It was Caio Sergio Orata, a rich and enterprising businessman who got the idea at the beginning of the I century AC.

He knew that near the Vesuvio there were some natural thermal springs that emitted very hot vapours where people went to cure themselves. The Romans, in fact, thought that sweating would get the body rid of the humours that caused diseases. Caio Sergio Orata thought that these hot vapours could be artificially created by lighting fires under buildings. And these buildings could be located anywhere. Thus, the first thermae was born. Actually, the first bath houses were called balneum, and they were quite small and frequent (there were an average of five bath houses per block in a city.) These bath houses were so popular that the Emperor Agrippa decided to build a colossal one. In the following years, more and more emperors followed his example. 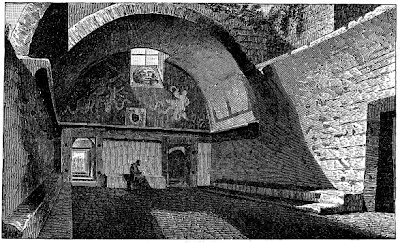 These huge buildings were called thermae (from the Greek word, thermos, meaning “hot”). They were big bath complexes that included several types of baths, sports halls, parks, restaurants and sometimes even a library and a little theatre. But of course the main attraction was the different types of baths: cold baths, hot bath, and hot-air baths. You’d probably think that going to such a majestic place could be very expensive but instead the entrance fee was so cheap that anyone, rich and poor, men and women, slaves and free men could enter. But of course there was a catch. Once inside Romans had to pay for all the services they wanted to use, such as bathing in pools and custody of clothes, massages etc. Rich Patricians usually brought their own equipment, such as brushes and oil flaks, with them and were accompanied by slaves who would perform massages on their masters and guard their clothes while they were bathing so that they wouldn’t be stolen like it sometimes happened to those who couldn’t pay for custody of clothes. 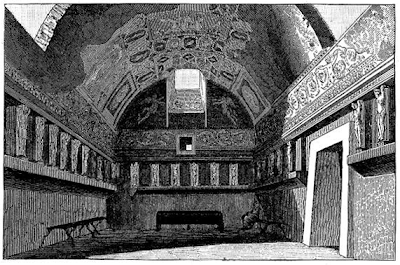 Once inside the thermae, you could stop at the entrance, where there usually was a natatio, ie a swimming pool, and chat with your friends, discuss business deals.. there were even prostitutes looking for clients. Next, you’d go to the apodyterium, a room for undressing. Most people kept on a subligaculum, an undergarment in the shape of either shorts or a loincloth, others kept even their tunic on, while others still only wore a small black thong. If you wanted to go into the main complex of the thermae and bathe (never swim as most Romans just weren’t able to), you needed to pay another fee, which was actually higher for women! It has been speculated that this was because they didn’t go to the thermae as often as men did. The entrance for slaves, soldiers and children, instead was free. 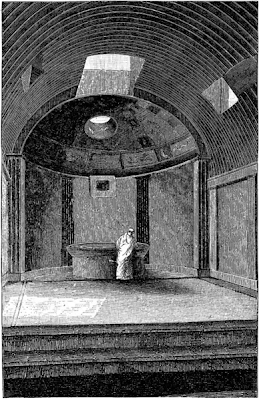 Usually, the first stop was the palestra (gym) or courtyard where men and men would play ball games or wrestle with a heavy sack filled with sand suspended from the ceiling. This workout was meant to stimulate the circulation and make people start sweating, getting them ready for the baths. From here, the bathers moved to the tepidarium, a large room where the temperature was only moderately hot. A lot of people skipped this room because they were already quite hot from the exercise they did in the palestra. They went straight to the calidarium, a steamy room with a pool with hot water. Here the temperature was so hot people needed to wear wooden sandals to protect their feet from the burning floor and sweated profusely. And yet this wasn’t the hottest room in the thermal complex. That was the next room called laconicum. 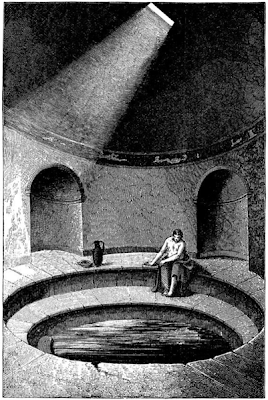 Here the temperature reached 60°C! This was a hot bath air, similar to our saunas nowadays, made possible by heating the marble floor, raised on pillars, with a log fire. The hot air was then channelled through earthenware pipes in the walls. Here too people had to wear sandals and towels/clothes if they didn’t want the floor or walls to burn their skin.People didn’t stay long in the laconicum. Next, bathers would get a massage and then their skin was exfoliated, getting rid of all that sweat, dirt and dead skin cells, with the help of a strigil (a small and curved metal tool). The last stop was the frigidarium, where people could take cold baths in the pool. Women usually skipped this step cos it was believed that these sudden temperature changes were dangerous for them. And they could be dangerous indeed. It sometimes happened that people had strokes because of the temperature changes, and sometimes they even slipped and fell on the slippery floor, breaking a few bones. Spending a lot of time in this room could even cause hearing problems and deafness. Once refreshed, people would proceed to one of the relaxing areas, such as the library or restaurants, and keep socializing.