Marie Rosalie Bonheur was born in Bourdeaux in 1822 into a poor but artistic family. Her mother was a piano teacher, while her father, Oscar-Raymond Bonheur, a landscape and portrait painter who believed that women should be educated as well as men. Raymond gave Rosa, as she was commonly called, and her three siblings, August, Juliette and Isidore, all of whom would become artists as well, drawing lessons. The young girl showed such a talent and promise for the arts that Raymond allowed her to give up her job (she had been apprenticed against her will to a seamstress) to follow her passion. To help support the family, that had in the meantime moved to Paris, Rosa sold small models and illustrations for books or albums. 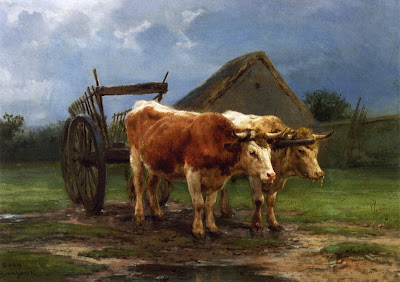 Rosa was especially good at drawing pictures of animals. Her love of animals was born when her mother, to teach her how to read and write, made her draw an animal for each letter of the alphabet. The artist first began her training by copying pictures of other artists, and later began to make sketches of animals from life. To study their anatomy, she often visited the stables of the Veterinary School at Alfort, the Jardin des Plantes and the abattoirs. The people working there greatly admired her works and treated her with respect. Despite this, these visits were really hard for her. She loved animals (she had several birds and sheep) and it was painful to her to see them put to death. She also spent quite a lot of time studying grazing herds in the country. During these outings, she was disguised as a boy (she even cut her hair short) and broke the hearts of several pretty girls who, not suspecting the truth, tried to flirt with her! 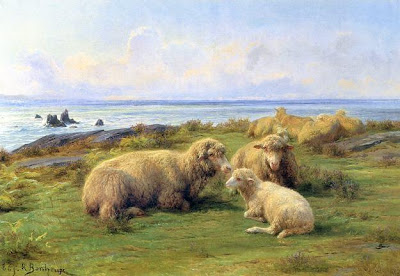 Sheep by the sea

Rosa was criticized for wearing trousers but she didn’t care. She wore them simply because, working with animals, they were more practical: “I was forced to recognize that the clothing of my sex was a constant bother. That is why I decided to solicit the authorization to wear men’s clothing from the prefect of police. But the suit I wear is my work attire, and nothing else. The epithets of imbeciles have never bothered me….” But direct observation wasn’t the only method she employed to study the anatomy of animals. She also read illustrated books on the subject, obtained casts and even dissected dead animals! The girl was surely dedicated to her studies and never let a chance to further them pass her by!

All this hard work paid off. At 19, Rosa exhibited two of her pictures, “Goats and Sheep” and “Two Rabbits” at the Salon. These were well-received, so the next year she sent three more pictures. The artist continued to exhibit paintings at the Salon and, during the years, won 4 medals. In 1849, she won the gold medal with her painting “Cantal Oxen”. By now, Rosa had become one of the most famous female artists of her time. Even the French government recognized her talents and gave her a beautiful vase of Sèvres porcelain. The Empress Eugenie also decorated her with the Legion Of Honour, which had previously been given only to men. 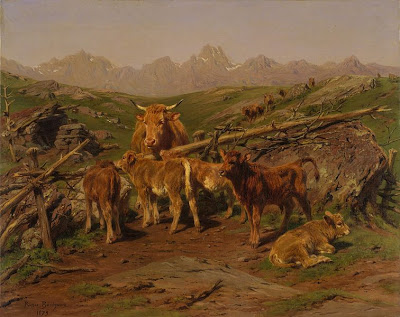 She also spent a lot of time in the mountains, in the huts of charcoal burners, huntsmen, or woodcutters, where she made sketches for several of her paintings, including “Morning in the Highlands” and “The Denizens of the Mountains”. Once, she lived for six weeks on the Pyranees. For the whole time, her party and she saw no one apart from muleteers, who would dance national dances for them. To eat, they had only frogs’ legs, black bread and curdled milk. 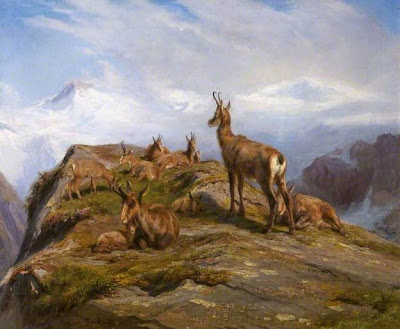 After 1853, the year she exhibited one of her most famous paintings, The Horse Fair, which gained her worldwide fame, Rosa retreated from public life. She bought a house in Fountainebleau, where she lead a quite life first with her childhood friend Nathalie Micas and, after her death, with American painter Anna Klumpke. And a little menagerie of animals, of course! Rosa died at Thomery, France, in 1899, aged 77. After her death a collection of her works, including studies, etchings and pictures, many of which had never been seen by the public before, were auctioned off in Paris.