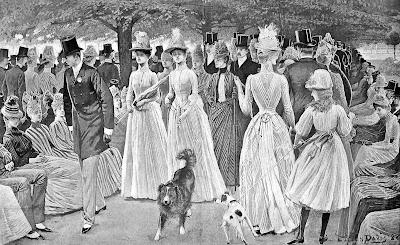 SALUTATION ORIGINALLY AN ACT OF WORSHIP

A lady writer of distinction says of salutations: “It would seem that good manners were originally the expression of submission from the weaker to the stronger. In a rude state of society every salutation is to this day an act of worship. Hence the commonest acts, phrases and signs of courtesy with which we are now familiar, date from those earlier stages when the strong hand ruled and the inferior demonstrated his allegiance by studied servility. Let us take, for example, the words ‘sir’ and ‘madam.’ ‘Sir’ is derived from seigneur, sieur, and originally meant lord, king, ruler and, in its patriarchal sense, father. The title of sire was last borne by some of the ancient feudal families of France, who, as Selden has said, ‘affected rather to be styled by the name of sire than baron, as Le Sire de Montmorenci and the like.’ ‘Madam’ or ‘madame,’ corrupted by servants into ‘ma’am,’ and by Mrs. Gamp and her tribe into ‘mum,’ is in substance equivalent to ‘your exalted,’ or ‘your highness,’ madame originally meaning high-born, or stately, and being applied only to ladies of the highest rank.

“To turn to our every-day forms of salutation. We take off our hats on visiting an acquaintance. We bow on being introduced to strangers. We rise when visitors enter our drawing-room. We wave our hand to our friend as he passes the window or drives away from our door. The Oriental, in like manner, leaves his shoes on the threshold when he pays a visit. The natives of the Tonga Islands kiss the soles of a chieftain’s feet. The Siberian peasant grovels in the dust before a Russian noble. Each of these acts has a primary, an historical significance. The very word ‘salutation,’ in the first place, derived as it is from salutatio, the daily homage paid by a Roman client to his patron, suggests in itself a history of manners.

“To bare the head was originally an act of submission to gods and rulers. A bow is a modified prostration. A lady’s courtesy is a modified genuflection. Rising and standing are acts of homage; and when we wave our hand to a friend on the opposite side of the street, we are unconsciously imitating the Romans, who, as Selden tells us, used to stand ‘somewhat off before the images of their gods, solemnly moving the right hand to the lips and casting it, as if they had cast kisses.’ Again, men remove the glove when they shake hands with a lady—a custom evidently of feudal origin. The knight removed his iron gauntlet, the pressure of which would have been all too harsh for the palm of a fair chatelaine; and the custom, which began in necessity, has traveled down to us as a point of etiquette.”

Each nation has its own method of salutation. In Southern Africa it is the custom to rub toes. In Lapland your friend rubs his nose against yours. The Turk folds his arms upon his breast and bends his head very low. The Moors of Morocco have a somewhat startling mode of salutation. They ride at a gallop toward a stranger, as though they would unhorse him, and when close at hand suddenly check their horse and fire a pistol over the person’s head. The Egyptian solicitously asks you, “How do you perspire?” and lets his hand fall to the knee. The Chinese bows low and inquires, “Have you eaten?” The Spaniard says, “God be with you, sir,” or, “How do you stand?” And the Neapolitan piously remarks, “Grow in holiness.” The German asks, “How goes it with you?” The Frenchman bows profoundly and inquires, “How do you carry yourself.”

Foreigners are given to embracing. In France and Germany the parent kisses his grown-up son on the forehead, men throw their arms around the necks of their friends, and brothers embrace like lovers. It is a curious sight to Americans, with their natural prejudices against publicity in kissing.

In England and America there are three modes of salutation—the bow, the handshaking and the kiss.

It is said: “A bow is a note drawn at sight. You are bound to acknowledge it immediately, and to the full amount.” It should be respectful, cordial, civil or familiar, according to circumstances. Between gentlemen, an inclination of the head, a gesture of the hand, or the mere touching of the hat is sufficient; but in bowing to a lady, the hat must be lifted from the head. If you know people slightly, you recognize them slightly; if you know them well, you bow with more familiarity. The body is not bent at all in bowing; the inclination of the head is all that is necessary.

If the gentleman is smoking, he withdraws his cigar from his mouth before lifting his hat to a lady, or if he should happen to have his hand in his pocket he removes it.

At the moment of the first meeting of the eyes of an acquaintance you bow. Any one who has been introduced to you, or any one to whom you have been introduced, is entitled to this mark of respect.

The bow is the touchstone of good breeding, and to neglect it, even to one with whom you may have a trifling difference, shows deficiency in cultivation and in the instincts of refinement. A bow does not entail a calling acquaintance. Its entire neglect reveals the character and training of the person; the manner of its observance reveals the very shades of breeding that exist between the ill-bred and the well-bred.

A gentleman walking with a lady returns a bow made to her, whether by a lady or gentleman (lifting his hat not too far from his head), although the one bowing is an entire stranger to him.

It is civility to return a bow, although you do not know the one who is bowing to you. Either the one who bows, knows you, or has mistaken you for some one else. In either case you should return the bow, and probably the mistake will be discovered to have occurred for want of quick recognition on your own part, or from some resemblance that you bear to another.

THE MANNER OF BOWING

The manner in which the salutation of recognition is made, may be regarded as an unerring test of the breeding, training, or culture of a person. It should be prompt as soon as the eyes meet, whether on the street or in a room. The intercourse need go no further, but that bow must be made. There are but few laws which have better reasons for their observance than this. This rule holds good under all circumstances, whether within doors or without. Those who abstain from bowing at one time, and bow at another, should not be surprised to find that the person whom they have neglected, has avoided the continuation of their acquaintance.

DUTIES OF YOUNG TO OLDER PEOPLE

Having once had an introduction that entitles to recognition, it is the duty of the person to recall himself or herself to the recollection of the older person, if there is much difference in age, by bowing each time of meeting, until the recognition becomes mutual. As persons advance in life, they look for these attentions upon the part of the young. Persons who have large circles of acquaintance, often confuse the faces of the young whom they know with the familiar faces which they meet and do not know, and from frequent errors of this kind, they get into the habit of waiting to catch some look or gesture of recognition.

HOW TO AVOID RECOGNITION

If a person desires to avoid a bowing acquaintance with a person who has been properly introduced, he may do so by looking aside, or dropping the eyes as the person approaches, for, if the eyes meet, there is no alternative, bow he must.

Bowing once to a person upon a public promenade or drive is all that civility requires. If the person is a friend, it is in better form, the second and subsequent passings, should you catch his or her eye, to smile slightly instead of bowing repeatedly. If an acquaintance, it is best to avert the eyes.

A bow should never be accompanied by a broad smile, even when you are well acquainted, and yet a high authority well says: “You should never speak to an acquaintance without a smile in your eyes.”

The words commonly used in saluting a person are “Good Morning,” “Good Afternoon,” “Good Evening,” “How do you do” (sometimes contracted into “Howdy” and “How dye do,”) and “How are you.” The three former are most appropriate, as it seems somewhat absurd to ask after a person’s health, unless you stop to receive an answer. A respectful bow should accompany the words.

Among friends the shaking of the hand is the most genuine and cordial expression of good-will. It is not necessary, though in certain cases it is not forbidden, upon introduction; but when acquaintanceship has reached any degree of intimacy, it is perfectly proper.

An authority upon this subject says: “The etiquette of handshaking is simple. A man has no right to take a lady’s hand until it is offered. He has even less right to pinch or retain it. Two young ladies shake hands gently and softly. A young lady gives her hand, but does not shake a gentleman’s unless she is his friend. A lady should always rise to give her hand; a gentleman, of course, never dares to do so seated. On introduction in a room, a married lady generally offers her hand; a young lady, not. In a ball-room, where the introduction is to dancing, not to friendship, you never shake hands; and as a general rule, an introduction is not followed by shaking hands, only by a bow. It may perhaps be laid down that the more public the place of introduction, the less handshaking takes place. But if the introduction be particular, if it be accompanied by personal recommendation, such as, ‘I want you to know my friend Jones,’ or if Jones comes with a letter of presentation, then you give Jones your hand, and warmly, too. Lastly, it is the privilege of a superior to offer or withhold his or her hand, so that an inferior should never put his forward first.”

In shaking hands, the right hand should always be offered, unless it be so engaged as to make it impossible, and then an excuse should be offered. The French give the left hand, as nearest the heart.

The mistress of a household should offer her hand to every guest invited to her house.

A gentleman must not shake hands with a lady until she has made the first move in that direction. It is a mark of rudeness not to give his hand instantly, should she extend her own. A married lady should always extend her hand to a stranger brought to her house by a common friend, as an evidence of her cordial welcome. Where an introduction is for dancing there is no shaking of hands.

This is the most affectionate form of salutation, and is only proper among near relations and dear friends.

THE KISS OF FRIENDSHIP

The kiss of friendship and relationship is on the cheeks and forehead. In this country this act of affection is generally excluded from public eyes, and in the case of parents and children and near relations, it is perhaps unnecessarily so.

The custom which has become quite prevalent of women kissing each other whenever they meet in public, is regarded as vulgar, and by ladies of delicacy and refinement is entirely avoided.

THE KISS OF RESPECT

The kiss of respect—almost obsolete in this country—is made on the hand. The custom is retained in Germany and among gentlemen of the most courtly manners in England.