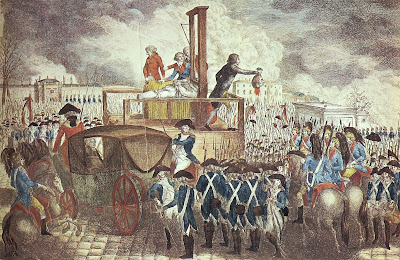 After the execution of Louis XVI, the revolutionary journal ‘Thermomètre du jour’ published an inaccurate report of the event. The paper stated, among other calumnies, that the King had to be led to the scaffold with a pistol held at his temple and that the guillotine had struck his neck instead than his head, thus horribly mutilating him. When the executioner Charles Henri Sanson read this article, he decided to write a full account of the event to set the record straight and sent it to the newspaper. The King, according to Sanson, showed bravery and calmness of mind, which in his opinion, he derived from religion. Here’s his account:

A short absence has prevented my sooner replying to your article concerning Louis Capet. But here is the exact truth as to what passed. On alighting from the carriage for execution, he was told that he must take off his coat; he made some difficulty, saying that they might as well execute him as he was. On [our] representation that that was impossible, he himself assisted in taking off his coat. He again made the same difficulty when his hands were to be tied, but he offered them himself when the person who accompanied him [his confessor] had told him that it was the last sacrifice [the Abbe Edgeworth had suggested to him that the Saviour had submitted to the same indignity]. Then he inquired whether the drums would go on beating as they were doing. We answered that we could not tell. And it was the truth. He ascended the scaffold, and advanced to the front, as if he intended to speak; but we again represented to him that the thing was impossible: he then allowed himself to be conducted to the spot, when he was attached to the instrument, and from which he exclaimed, in a loud voice, “People, I die innocent!” Then, turning round to us, he said, “Sir, I die innocent of all that has been imputed to me; I wish that my blood may cement the happiness of the French people!”

“These, citizen, were his last and exact words. The kind of little debate which occurred at the foot of the scaffold turned altogether on his not thinking it necessary that his coat should he taken off, and his hands tied; he would also have wished to cut off his own hair [he had wished to have it done early in the morning by Clery, but the Municipality would not allow him a pair of scissors].

And, as an homage to truth, I must add that he bore all this with a sangfroid and firmness which astonished us all. I am convinced that he had derived this strength of mind from the principles of religion, of which no one could appear more persuaded and penetrated.

You may be assured, citizen, that there is the truth in its fullest light.

I have the honour to be
Your fellow citizen,
Sanson

Further reading:
History of the guillotine. Revised from the ‘Quarterly review’ by John Wilson Croker