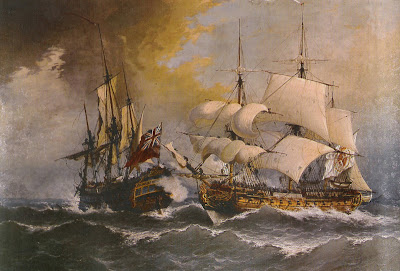 At the beginning of the nineteenth century, English ladies rarely travelled abroad, let alone sail to Africa with their baby daughters to meet their husbands. But that’s exactly was Sarah Wallis Bowdich (1791-1856) did (only to discover that her husband had briefly returned to England!, and their poor daughter fell ill and died in Africa, but that’s a subject for another post). Travelling at the time was full of dangers, including mutiny and pirates and poor Sarah was unlucky enough to experience both! Can you imagine how frightening that must have been? Here is the story of her encounter with the pirates while sailing back home as she told it in her book, Stories of Strange Lands:

Only a short interval took place between the south and north-east trades; and, in the latter, a glorious breeze was carrying us along at nine knots an hour, when a white sail appeared in the horizon. She bore down full upon us, and, to our dismay, we found her to be a pirate. A consultation was held, and our internal opponent in all things negatived our advice not to resist. This accorded with the captain’s opinion (for he had been a lieutenant in the navy, and thought that he ought not to submit), and we therefore cheerfully prepared to follow his orders. Swiftly and steadily did the pirate near us on the larboard side, and, accordingly, measures were taken to meet her in that quarter. We had not enough ammunition to fit up two sides for an engagement, therefore every thing was brought over to one. The first step was to collect all the gold and silks on board, and, opening one of the hatchways, to bury them among the logs of wood in the hold.

This being done, the scuttle was replaced, and fresh caulked, to avoid all suspicion of recent opening. Our four small cannons were cleaned and loaded, the sick men were placed among the rigging armed with pistols; the sails were set square, to give the appearance of an armed vessel; the union Jack was hoisted; and Mr. Bowdichvvas ordered to walk up and down the deck in his scarlet uniform, to be taken for a marine officer. The captain was in his element, and prodigiously grand, considering his force; and his constant expression, that “a British sailor knew not how to yield,” seemed actually to inspire the men, though several had begun operations with a most significant smile. All was obedience, and the part assigned to me was the giving out the small arms and powder, taking notes of the portion assigned to each. Our black servant-girl cried bitterly, for she fancied she should be again forced into slavery, but employing her with me soon dried her tears. […]

My task being at length completed, and the remaining ammunition locked up, I went above to see how matters stood, and when I presented myself, a momentary pause ensued, and each looked at the other, as much as to say, “What shall we do with her?” At length Mr. Bowdich suggested that I should retire to my cabin, and, lying in my berth, pretend to be very ill. In vain I urged the contradiction that my face, red with exertion, would present, he replied that it would be taken for fever, and there seemed to be no alternative, but I staid in the bustle as long as I dared. All was in readiness, and the men pompously standing at their guns, when suddenly the pirate ship altering her course, pounced upon us on our defenceless side, and it was perfectly laughable to see the surprise and consternation of the whole crew; she fired, and answering her signal, for resistance was now evidently hopeless, we hove to—she was a beautiful creature, as the sailors called her, built for sailing, and elegant in all her proportions; two tiers of guns stared from her port-holes, and a long brass gun, mounted on a swivel was placed on her deck, and which would have raked us fore and aft had we hesitated to obey her signal.

Two boats were instantly lowered, and being filled with armed men, we were boarded in due form, but, at the instant these boats were in motion, I was hurried below, and before the strangers descended, Mr. Bowdich, seized with a new idea, hastily rushed into my cabin, threw over me a pile of great-coats, boat cloaks, &c., and, conjuring me to lie still, left my door wide open, to give an appearance of carelessness as to what was within. I thought I should have been stifled, but contriving a breathing hole, I caught a glimpse of the visitors, and heard all that passed. They proved to be Spaniards, and could not speak English; Mr. Bowdich then tried them in French, with which they were perfectly acquainted, and in which language the conversation was held. They said with the utmost indifference that they had three hundred slaves on board, but they were sure of getting safe to the Havannah, as they had a complement of one hundred men and were well armed.

They asked whence we came, and care was taken to state the Gaboon river, and not Cape Coast, for fear of being forced to give up our gold dust. They then said they must have provisions, for they were afraid of their own not lasting; and using no ceremony, they ordered the goats, pigs, &c. into their boats, and, hinting that the severe illness of their captain alone prevented them from using their guns, they claimed a large portion of the salted stores and biscuit. Our captain was ready to do every thing they asked, and even added the last bag of white biscuit as a present to their commander; the hero of small arms bowed down to the ground, and I could not help fancying that the interpreter was anxious to ensure their civility by his own. They looked into most of the cabins, and observed, that mine being doubtless that of the English officer they should not inspect it. Having secured all they thought worth taking, they departed, and I crept up to take another look at their ship.

She was painted white, with a narrow black streak, and seemed to skim the surface like an eagle; her planks almost appeared to move, and she bent so majestically to the motion of the waves, that we could scarcely bring ourselves to believe, that so beautiful an exterior covered so much misery. She was soon out of sight, and as some of us stood gaping at her till the last moment, we heard one of our sailors say, “She walks!” another, “there’s a thing to live in!” a third, “she’s a lady of quality;” and not a soul on board but seemed to lose their sense of danger in the contemplation of her extraordinary beauty. At length we recollected how grateful we ought to be for our escape, which was rare at that time, and which we probably owed entirely to the illness of the pirate captain.

Further reading:
Stories of strange lands: and fragments from the notes of a traveller by Mrs R. Lee