today I’m gonna briefly review three romance novels set in our modern time. This is not really my favourite genre, but I still like to read a few romance books, because as much as I like historical biographies, essays and other not-fiction books, every now and then it’s nice to read something lighter that doesn’t require much concentration. I’m also a believer that you shouldn’t judge a book by its cover or blurb as sometimes, a book that seems really bad turns out to be amazingly good. Sadly, this is not the case for any of the three books reviewed today but I’m still not giving up hope of finding some good romance novels to recommend to you in the future. In the meantime, here’s what you should avoid, at least if you’re not a fan of romance novels:

Shameless by Suzanne Forster
Jessie Flood has always been considered the town white trash so everyone is surprised when she marries a millionaire. Especially his son Luc. He and Jessie were childhood friends and she knew how badly his father abused him. Jessie came from an abusive family too and one night her step-father Hank is killed in mysterious circumstances. The story takes place years after that and it centers around what really happened and who killed Hank. But while the plot sounds interesting, the characters aren’t. Luc acts like a jerk most of the time and uses every means he can think of to get Jessie to marry him, including force and blackmail. Jessie, on the other hand, is.. well.. sick and crazy. Not only is she still very attracted to Luc despite the terrible way he treats her, but, the first time they meet after years, she shoots him to protect some secrets she wants to stay hidden in the past. But Luc has no idea of why he’s been shot and that obviously prompts his curiosity to find out her secrets. Besides, what did she think to achieve by killing him but going to prison herself? It’s a book full of twists and turns but because of the annoying characters I just couldn’t get into it.
Available at: Amazon.com
Rating: 2/5

Special Delivery by Danielle Steel
Amanda, an ex-actress who gave up her profession to start a family, becomes unexpectedly a widow after 26 years of marriage. She falls into a depressed state and refuses to leave her home which worries her two daughters very much. One day, one of them convinces Amanda to go to a Christmas party hosted by her father-in-law, Jack. He’s an old, rich bachelor who owns a boutique in Beverly Hills. Amanda and Jack have never got on well, but all of this changes at the party. They bond over the marriage problems of their children (they can’t seem to be able to conceive a baby) and fall in love. All of their children, apart from Jack’s daughter, are against their relationship and things gets worse when Amanda finds out she’s pregnant. I think this is a very interesting topic for a book but the problem is that these issues aren’t fully developed and there are no deep insights on the plot itself. Instead, it’s a very short and rushed book with boring characters and a very predictable storyline. I honestly feel like giving up on Danielle Steel. Her early books such as Accident were really good but the most recent ones seem to be written in a hurry just to make a quick buck. What a shame!
Available at: Amazon.com
Rating: 2/5 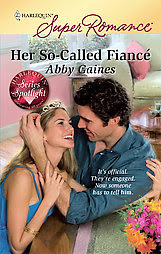 Her So-Called Fiance by Abby Gaines
Sabrina is a beautiful but insecure woman who’s been elected Miss Georgia but gets a hard time from the press because they consider her thighs chunky. She is interested in getting a job as the spokesperson for a school for injured children, a cause close to her heart as she herself had been seriously injured in a car crash when she was a teenager but managed to make a full recovery. However, when the charity is about to refuse her the job because they prefer to give it to someone with more gravitas, she pretends to be engaged to her ex Jake Warrington who is running for governor. That would put education for children with special needs on the political agenda and bring publicity to the school. Jake’s not happy about it but has no choice but to play along. His relationship to Sabrina ended years ago after she told the world Jake’s father, who was governor at the time, took a bribe. As a result, he lost the job and now the people of Georgia are afraid to vote for Jake in case he should turn out like his father. But to have the woman who denounced the father stand by the son may convince people that Jake is the right person for the job. While I like the idea for the book, I think this one too was rushed. I like that Sabrina is turning from a spoiled brat into an independent woman (although her obsession with her looks is annoying), but I think her romance with Jack just happened too soon. I also found the relationship between Jake’s father Ted and aunt (she had married Ted’s brother but is now a widow) as unnecessary and boring. In addition, the book is also very predictable. I can’t say I enjoyed it but then I’m not a fan of the genre. If you are, I think you’ll love this. Of course it’s not high literature and if that’s what you’re looking for, you’ll be disappointed. But if you judge it for the romance novel it is, then I’d say it is quite good and enjoyable.
Available at: Amazon.com
Rating: 3/5

Have you read these books? If so, what do you think of them?