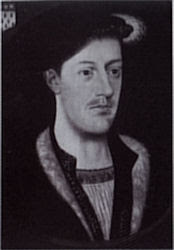 Sir Francis Weston was the son of Sir Richard Weston, former Under-Treasurer of the Exchequer, and his wife Anne Sandys, one of Queen Katherine’s ladies. We don’t know the exact date of his birth but it is thought he was 25 when he was executed, placing his birth around 1511. He belonged to a family of old lineage and high respectability, whose family home was a beautiful Tudor house in Surrey, donated by Henry VIII to Sir Richard in 1521. Weston started his career as a page and by 1532, he had become a gentleman of the Privy Chamber. He would often sleep in the King’s chamber to attend any needs he may have had.

Weston was a talented lute player and a very athletic man. He often played tennis, bowls and cards with Henry VIII. A member of the Boleyn faction, he was not only loved by the king, but was also a favourite of Anne and his brother Lord Rochford. At Anne’s coronation, in 1533, he was made a Knight Companion of the Order of the Bath. Three years before, he had married Anne Pickering, the daughter and heiress of Sir Christopher Pickering. In 1535, their son Henry was born.

But why was Weston accused of adultery with the Queen and, eventually, killed? Because Cromwell knew he couldn’t bring down Anne without destroying the Boleyn faction at court too and, just like Norris and Brereton, he was a member of it. He, therefore, spent a lot of time with the Queen and it was very easy for Cromwell to twist his innocent flirtation with Anne, which was simply part of the courtly love tradition of the time, into something more lurid and sordid.

It seems, for instance, that Anne, like she herself would later say when imprisoned in the Tower to her attending lady Mrs Coffing, had teased Weston “because he did love her kinswoman Mrs Shelton, and that she said he loved not his wife”. To this, he “made answer that he loved one in her house better than them both”. The Queen asked who. “It is yourself”, replied Weston. Weston also confirmed Anne’s suspicions that Norris hadn’t yet married her cousin Madge Shelton because he was in love with her. On 25th April, Anne had reproached Weston for flirting with Madge and wondered why Norris hadn’t married her yet. Weston replied that Norris “came more to her chamber for her than for Madge”.

Sir Francis Weston was interrogated by the Privy Council on 3rd May 1536 and, the following day, arrested and taken to the Tower. He was accused of illicit intercourse with the Queen at Westminster on 20 May 26 Hen. VIII [1534] and at Greenwich on 20th June but these dates just don’t make sense as Anne was actually in Richmond and Hampton Palace with the King on those days. No one really cared though and the outcome of the trial was a foregone conclusion. Weston was found guilty and sentenced to be hanged, drawn and quartered. The sentence was later commuted to beheading by the king. On 17th May, Weston, together with Rochford, Brereton, Smeaton and Norris, was executed.

Further reading:
The Lady In The Tower by Alison Weir
The Anne Boleyn Files