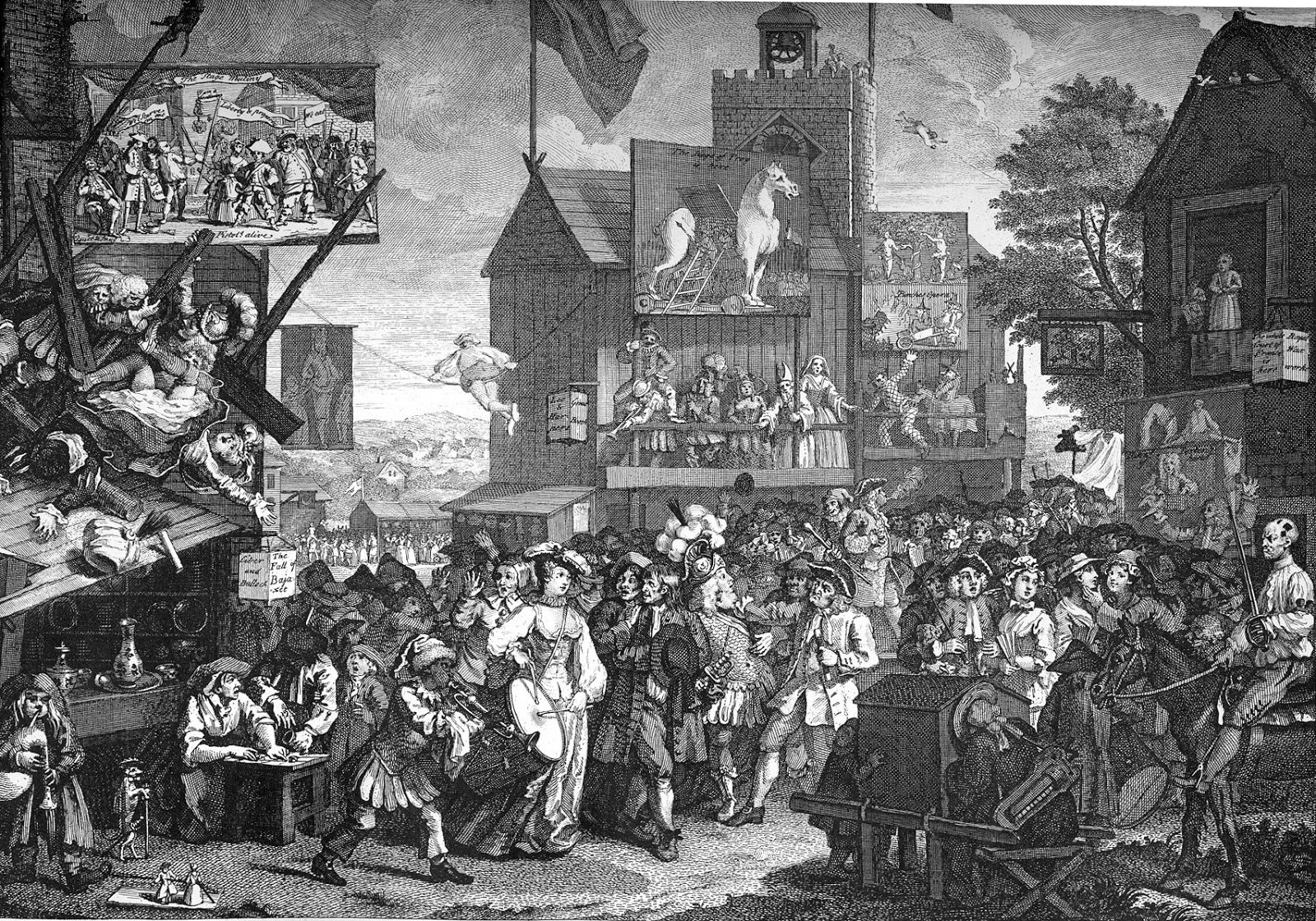 John Trusler describes the Southwark Fair, the famous Hogarth’s print. It depicts the fair held every September near the Church of St George the Martyr, and it was an occasion both for revelry and debauchery:

The principal view upon the left represents the fall of a scaffold, on which was assembled a strolling company, pointed out, by the paper lantern hanging in front, to be that belonging to Cibber and Bullock, ready dressed to exhibit “The Fall of Bajazet.” Here we see merry-andrews, monkeys, queens and emperors, sinking in one general confusion; and, that the crash may appear the greater, the stand beneath is humorously supposed to consist of earthenware and china. Notwithstanding this fatal overthrow, few below are seen to notice it; witness the boys and woman gambling at the box and dice, the upright monkey, and the little bag-piper dancing his wooden figures.

Above this scaffold hangs a painting, the subject of which is the stage mutiny; whose figures are as follow:—On one side is Pistol, (strutting and crying out, “Pistol’s alive,”) Falstaff, Justice Shallow, and many other characters of Shakspeare. On the other, the manager bearing in his hand a paper, on which is written, “it cost 6000l.” a scene-painter, who has laid his brushes aside, and taken up a cudgel; and a woman holding an ensign, bearing the words, “We’ll starve ’em out.” In the corner is a man, quiet and snug, hugging a bag of money, laughing at the folly of the rest; and behind, a monkey, perched upon a sign iron, supposed to be that of the Rose Tavern in Drury-lane, squeaking out, “I am a gentleman.”

These paintings are in general designed to show what is exhibited within; but this alludes to a dispute that arose at the time when this print was published, which was in the year 1733, between the players and the patentee of Drury-lane Theatre, when young Cibber, the son of the Laureate, was at the head of the faction. Above, on one side, is an equilibrist swinging on a slack rope; and on the other, a man flying from the tower to the ground, by means of a groove fastened to his breast, slipping over a line strained from one place to the other. At the back of this plate is Lee and Harper’s great booth, where, by the picture of the wooden horse, we are told, is represented “The Siege of Troy.”

The next paintings consist of the fall of Adam and Eve, and a scene in Punch’s opera. Beneath is a mountebank, exalted on a stage, eating fire to attract the public attention; while his merry-andrew behind is distributing his medicines. Further back is a shift and hat, carried upon poles, designed as prizes for the best runner or wrestler. In front is a group of strollers parading the fair, in order to collect an audience for their next exhibition; in which is a female drummer, at that time well known, and remarked for her beauty, which we observe has caught the eye of two countrymen, the one old, the other young. Behind these men is a buskined hero, beset by a Marshalsea Court officer and his follower.

To the right is a Savoyard exhibiting her farthing show; and behind, a player at back sword riding a blind horse round the fair triumphantly, in all the boast of self-important heroism, affecting terror in his countenance, glorying in his scars, and challenging the world to open combat: a folly for which the English were remarkable. To this man a fellow is directing the attention of a country gentleman, while he robs him of his handkerchief. Next him is an artful villain decoying a couple of unthinking country girls to their ruin. Further back is a man kissing a wench in the crowd; and above, a juggler performing some dexterity of hand. Indeed it would be tedious to enter into an enumeration of the various matter of this plate; it is sufficient to remark that it presents us with an endless collection of spirited and laughable characters, in which is strikingly portrayed the character of the times.

Further reading:
The Works of William Hogarth: In a Series of Engravings With Descriptions, and a Comment on Their Moral Tendency by John Trusler