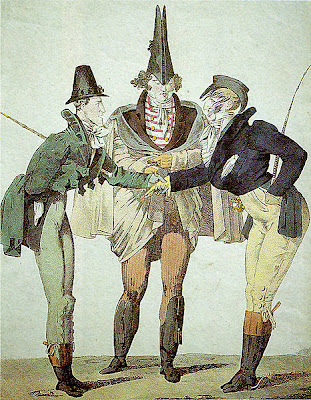 French fashions during and after the Terror were the subjects of many satires in England, as Graham Everitt discusses in his book, English Caricaturists and Graphic Humourists of the Nineteenth Century:

Subjects for the pencil of a clever graphic satirist were not wanting sixty years ago. France in those days set the fashion both in male and female attire, and the strangest eccentricities had marked the emancipation of that country from the thraldom of the Terror. There were the incroyables, a set of young dandies who affected royalist sympathies, and paraded the streets of Paris when young Napoleon was yet a general in the service of the Directory. They wore short-waisted coats with tails of preposterous length, cocked hats of ponderous dimensions, green cravats, powdered hair plaited and turned up with a comb, while on each side of the face hung down two long curls called dogs’ ears (oreilles de chien). These charming fellows carried twisted sticks of enormous size, as weapons of offence and defence, and spoke in a peculiarly affected manner.

Some fourteen or fifteen years later on, when we had driven Joseph Bonaparte and his brother’s legions out of Spain, the fashions had not improved. The biographer of Victor Hugo gives us the picture of one Gilé, a Parisian dandy of that period, whose coat of olive brown was cut in the shape of a fish’s tail, and dotted all over with metal buttons even to the shoulders. Young men who went to moderate lengths in fashion were content to wear the waists of their coats in the middle of their backs, but the waist of this Gilé intruded on the nape of his neck. His hat was stuck on the right side of his head, bringing into prominent notice on the left a thick tuft of hair frizzed out with curling irons. His trousers were ornamented with stripes which looked like bars of gold lace; they were pinched in at the knees and wide at the bottom, giving his feet the appearance of elephant’s hoofs.