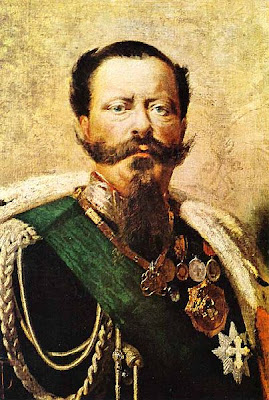 On February 18th 1861, with the Italian unification almost complete, Parliament declared the creation of the Kingdom of Italy (which would be officially proclaimed on March 17th). On that day, King Victor Emmanuel II of Piedmont, Savoy and Sardinia assumed the title of King of Italy. Here is his opening address to the Italian Parliament:

Senators and Deputies:
Free and almost entirely united by the wonderful aid of Divine Providence, the harmonious cooperation of the people, and the splendid valor of the army, Italy confides in our uprightness and wisdom. Upon you it devolves to give her uniform institutions and a firm foundation. In extend­ing greater administrative liberty to peoples that have had various usages and institutions, you will take care that polit­ical unity, the aspiration of so many centuries, may never be diminished.
The opinion of civilized nations is, favorable to us. The just and liberal principles now prevailing in the councils of Europe are favorable to us. Italy herself will in turn become a guarantee of order and peace, and will once more be an efficient instrument of universal civilization.

The emperor of the French, firmly upholding the maxim of non-intervention, – a maxim eminently beneficial to us, – nevertheless deemed it proper to recall his envoy. If this fact was a cause of chagrin to us, it did not change our sen­timents of gratitude toward him or diminish our confidence in his affection for the Italian cause. France and Italy, with their common origin, traditions, and customs, formed on the plains of Magenta and Solferino a bond that will prove indissoluble.
The government and people of England, that ancient country of freedom, warmly sanction our right to be the arbi­ters of our own destinies; and they have lavishly bestowed upon us their good offices, the grateful remembrances of which will be imperishable.

A loyal and illustrious prince having ascended the throne of Prussia, I dispatched to him an ambassador in token of respect for him personally and of sympathy with the noble German nation, which I hope will become more and more secure in the conviction that Italy, being established in her natural unity, cannot offend the rights or interests of other nations….
Valiant youths, led on by a captain who has filled with his name the most distant countries, have made it evident that neither servitude nor long misfortune has been able to weaken the fiber of the Italian peoples. These facts have inspired the nation with great confidence in its own destinies. I take pleasure in manifesting to the first parliament of Italy the joy that fills my heart as king and soldier.