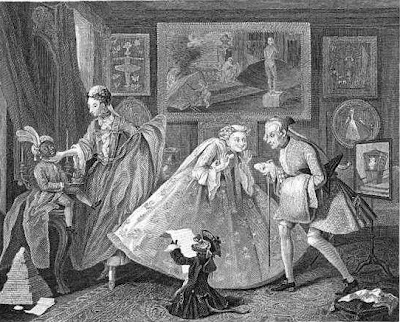 Mary Edwards of Kensington, a young heiress, was considered eccentric. She had married a son of the fourth Duke of Hamilton, but dumped him when she realised how profligate he was. Mary was more careful with money and often wore old-fashioned clothes. Tired of being ridiculed for it, in 1742 Mary commissioned Hogarth to paint a picture that mocked what she thought were the real ridiculous and superficial fashions and manners of the upper class.The result is a humorous painting called Taste In High Life.

In the centre of the painting there is an old lady holding a small tea cap between her thumb and finger. Its companion saucer is in the hands of the gentlemen standing next to her. The two gaze at the small objects in admiration, enamoured with their beauty. At the time, it was fashionable for the rich to collect porcelain.

The lady is wearing a sacque of stuff brocade embroidered with roses and expanded by a large hoop that gives her an unnatural and weird pyramid shape. The gentleman, thought to be Charles “Beau” Colyear, 2nd Earl of Portmore because of the opulent outfit said to be just like that worn by him at Court, wears a large muff, black stock, a feathered chapeau, a long pigtail and carries a cane that’s dangling from his wrist. Clearly, he’s a fop.

On the left, another woman is holding the chin of a black page boy wearing a turban and playing with a pagoda. The young boy is said to represent Ignatius Sancho, a black actor and composer. He was the first black person to vote in Britain and campaigned for the abolition of slavery. The page, who was a slave, also mocks the fashions and frivolities considered so important by their masters.

In the foreground, a monkey, wearing a sumptuous cuffed robe with ruffles, a bag-wig and a laced hat, is, with the help of a magnifying mirror, reading a dinner menu offering “cox combs, ducks tongues, rabbits ears and fricasey of snails”. The room is decorated with a big china jar and a pyramid made with cards, while on the floor lies a bill, inscribed “Lady Basto, Dr to John Pip, for cards,—£300.”

The walls are ornamented with pictures showing the transitory nature of fashion. These include the Medicean Venus, who is wearing stays and high-heeled shoes, and holding before her a hoop petticoat larger than a fig-leaf; a Cupid who uses a bellows to blow up a fire to burn petticoats and wigs; and a woman trapped in a sedan chair filled up by her hoops. Oh, what people are willing to do in the name of fashion!