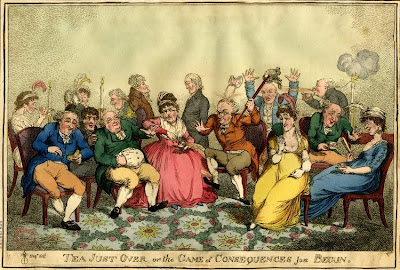 Consequences was a very popular game in the Georgian and Regency eras. Players are required to fill in the blanks of a story, then fold the paper over and pass it to the next player, who’ll have to continue it without knowing what has just been written. Anything you could happen in these stories, and they often were hilarious. But this is not the game of consequences James Gillray portrayed in this satirical print. What you are seeing here are the consequences of one little piece of snuff.

Here’s how the print is described in English Caricaturists and Graphic Humourists of the Nineteenth Century. How they Illustrated and Interpreted their Times by Graham Everitt:

“The ‘consequences’ of one gentleman sneezing are the following: he jerks the arm of the lady next him, the result being that she pours her cup of scalding hot tea over the knees of her neighbour, a testy old gentleman, who in his fright and pain raises his arms, jerking off with his cane the wig of a person standing at the back of his chair, who in the attempt to save his wig upsets his own cup and saucer upon the pate of his antagonist Another guest, with his mouth full of tea, witnessing this absurd contretemps is unable to restrain his laughter, the result of which is that he blows a stream of tea into the left ear of the man who has lost his wig, at the same time setting his own pigtail alight in the adjoining candle. All these disasters, passing in rapid succession from left to right, are the direct “consequences” of one unfortunate pinch of snuff.”