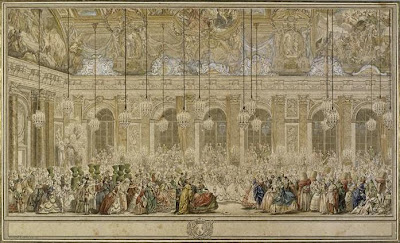 Life at Versailles was rigidly regulated by complicated and stifling rules of etiquette, which prescribed what the nobility, based on their ranks and position, could and couldn’t do. Marie Antoinette may have hated all these rules but the nobility, jealous of their privileges, were capable of making a huge fuss out of the most insignificant thing when they felt their “rights” where threatened or ignored. In his book, Domestic anecdotes of the French nation during the last thirty years, Isaac Disraeli shares one of these petty squabbles, which happened at a ball to celebrate the wedding of the dauphin Louis with the archduchess Marie Antoinette:

At the marriage of the late queen of France with Louis XVI then dauphin, a dispute which put all the court in a flame, took place in consequence of a minuet. The king, partial to the house of Lorraine, decided that a lady of that family should dance immediately after the princesses of the blood. This decision alarmed the dukes. They directly held a consultation at M. de Broglio’s, count and bishop, as one of the most ancient peers then at Paris. In spite of the horror which the church must feel on the subject of dancing, they discussed diligently, and composed a memoir, which the prelate was to present to his majesty, with the greatest solemnity. Most of the nobility had also signed this curious remonstrance on the subject of a minuet, to give it the more authority. The house of Lorraine, on their side, pretended to a right to this prerogative, in consequence of others it had enjoyed from time immemorial. The king replied to the remonstrance of the dukes, by a letter remarkable for its barbarous French, humiliating apologies, and unkingly diction. The letter is given as a curious specimen of bad composition, and singular frivolity in the letter of a monarch.

“The ambassador of the emperor and empress queen, in an audience which he had of me, has asked me from his master (and I am obliged to give credit to what he says) that I would be pleased to give some mark of distinction to Madame de Lorraine, at the present marriage of my grandson with the arch-duchess Antoinette. The dance at the ball being the only thing which is of no material consequence, since the choice of the dancers, both men and women, only depends on my will, without any distinction of places, ranks, or dignities, except the princes and princesses of my blood, who cannot be compared or placed in the rank with any other Frenchman, and not chusing besides to innovate in any thing usual at my court, I believe that the great (les grands) and the nobility of my kingdom, in virtue of submission, attachment, and even friendship which they have ever shewn to me and my predecessors will never do any thing which can displease me, and above all in this present circumstance, where I desire to mew to the empress my gratitude of the present she has made, which I hope, as well as you, will make the happiness of the rest of my days.”

This embarrassed letter, it is curious to observe, consists nearly of a single period! It is probably his majesty was its author; he has no claims to the honour of being a fine writer, nor a friend to an asthmatic reader. The matter did not here terminate. A great number of ladies invited on the occasion were absent from the ceremony. The dukes held assemblies on this fatal minuet. It was under their patronage that a work which displays uncommon erudition and taste was published. It is entitled, “An Essay on the Rank and Honours of the Court.” This was answered by the Abbe Georget, in a voluminous work, which displayed still more erudition than the former. What a concatenation of frivolity does all exhibit! The king suffers a pretty girl to dance a minuet, and behold the nobility of France are assembled, draw up remonstrances, and their ladies banish themselves from court. The king writes a miserable letter, and two learned scholars produce two curious work — and all this for a minuet!

Further reading:
Domestic anecdotes of the French nation during the last thirty years: indicative of the French revolution by Isaac Disraeli