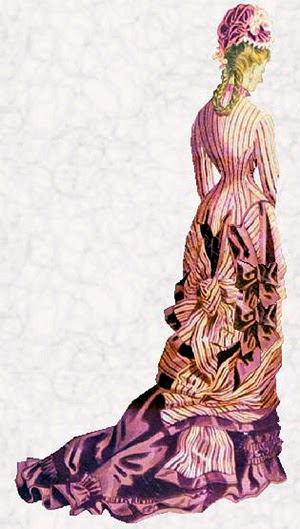 Fashion has long been trying to impress its fair votaries with the extreme folly of wearing a training dress in the dirty streets, or of applying to an everyday toilette what really belongs only to a court costume, and that only on gala-days, for in ordinary every-day life, trains are not worn even at court.

At the court of England, trains have been indispensable at the receptions called a “Drawing Room” from time immemorial, but Louis Philippe had banished them from his court, so that their revival at the court of France, under the present Emperor, or rather Empress, for we are to suppose that she presides over costumes, has created quite a sensation in Paris.

A train is the most difficult thing to wear; many a woman, graceful in the ordinary dress, feels awkward and embarrassed with this addition to her dress, for it must not be imagined that a train, such as is worn on the stage, is at all the train worn at court.

On the stage half a yard added to the length of the dress is considered a train, whilst the court, train is three yards long, leaving a yard and three-quarters or yard and a half on the ground.

At the English court, the train neatly folded, is thrown over the arm while passing through the spacious but crowded rooms loading to the presence chamber, the fullest, though not the most crowded, because the numerous assembly are all symmetrically arranged.

The queen on the throne at one end of the room, has the royal family and the officers of state ranged on each side of her in a semicircle; the middle of the room is entirely filled by the foreign ambassadors, the ministers of state, and the attaches, leaving only a narrow passage-way for the person presented to Her Majesty.

The lady about to be presented enters at a side door, where her card is taken by an officer and handed to a chamberlain, who pronounces her name to the queen. At the moment she passes this door, her train is spread out by a page, she then proceeds somewhat rapidly along this passage-way to the throne, kisses the queen’s extended hand, then passes on and goes out at a door on the opposite side. As she passes out, another page whisks up her train and throws it over her arm, and all is over—she has nothing more to do but to chat with her friends, and in due time make her way to her carriage, the real ceremony for which she came to court having taken about one minute and a half.

A far more formidable thing, is a presentation at the Imperial Court of France. Here, instead of being in a crowded and comparatively small room, as at Sr. James, the emperor and his court all stand at the extremity of a very long saloon. The lady to be presented enters through folding-doors at the other end; all eyes are upon her, and she has to traverse the whole length of the room, alone, under this ordeal, with the satisfaction of hearing her name handed from chamberlain to chamberlain, until it reaches the emperor. At the door of the saloon, as she enters, the lady presented has to make one formal curtesy, then walking into the middle of the room, she makes another, and lastly, advancing close up to the imperial group, she makes the third and last, which is most graciously responded to by the emperor by an imperial kiss on each cheek, and by a profound and courteous salutation from the empress.

All this appears easy to accomplish, but those who have not tried it, cannot tell how the courage, which is great at the opening of the folding-doors, oozes out whilst crossing the long gorgeous room to no other sound than that of your own name, and knowing that you are under the gaze of a whole court, yourself examined and criticised by the gentlemen, your dress most closely looked into by the women, and with no very indulgent comments.

The pace too, at which to traverse this ordeal room, is difficult to attain. The first inclination is to get over the ground as fast as possible in a kind of hand-gallop, but then with the appendage of a train, which would get into a wisp, and follow one like a serpent, this would be most injudicious—a solemn step and slow would be equally misplaced, for that would tire the patience of the lady outside, and keep the imperial party waiting, which, since the days of Louis XIV., who said, “Messrs, j’ai marque attendre.” (gentlemen, I was on the point of waiting) to his courtiers, is a great breach of courtly politeness and etiquette.’

Regular lessons are now given by all professors of dancing on the way to make les trois reverences, and on the bearing appropriate to a train. These trains are most expensive additions to a court dress. The Duchesse d’Isly, at one of the last receptions at the Tuileries, had one of blue moire antique, trimmed with feather trimming and silver bullion, and lined with white satin; besides this, there was a magnificent wreath of convolvulus and forgot-me-nots, embroidered in seed pearl and turquoise, so that this train actually cost thirty thousand francs, ($6,000,) a pretty extravagant price to pay for what can only be worn once. But then how many hands have been employed in this elaborate work; the luxury of the rich is the source of comfort to those less endowed with the gifts of fortune. The rich have no right to their riches, unless they spend them nobly and generously and with judgment. Riches, accompanied by generosity, never excite envy, but the avaricious and the selfish find enemies and detractors everywhere.

The revival of sumptuous dresses for court, of embroidered uniforms, has given great activity to the Paris trade, and above all, given well-paid employment to a respectable class of women, so often in want of work suited to their position. It is almost an art to embroider in gold and silver, and requires both intelligence and care.

Trains in England, excepting for royalty, are not so magnificent as in France; young ladies in particular, trim them with flowers and quillings, and choose them with an eye to future dresses, for the outside will make one and the lining another. Josephine is said to have worn a train in perfection, and to have imparted the secret to her daughter, Hortense, the mother of the present emperor. They, however, both took lessons from Mademoiselle Mars, the great actress. It is well known that Napoleon took many lessons of Talma, as to how to wear his imperial robes, and that for ten days before the coronation, he rehearsed with that great artist, his intimate friend, all the ceremonial of that great day. Napoleon, though called the great, knew well the importance of small things, on the masses.