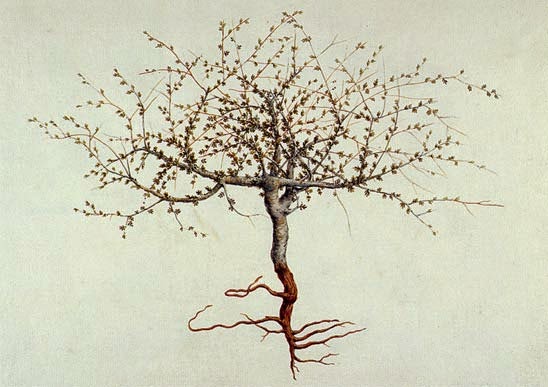 This is a liquid resin, of a whitish color, approaching to yellow, with a strong smell, resembling that of a lemon; a pungent and aromatic taste. It is likewise called balm of Judea, white balm of Constantinople, balm of Egypt, balm of Grand Cairo, and Opobalsamum. It is one of the most highly esteemed cosmetics, though very dear, and in its genuine form extremely difficult
to be procured. That sold in London and Paris is made by the perfumers of those cities: “It is,” says M. Mongez, “a mixture of the finest turpentine with aromatic oils, whose aroma approaches nearest to that of the genuine balm. These imitations sell at the rate of twenty-four to thirty shillings per ounce, whereas the same quantity of the real balm of Mecca cannot be procured for less than four guineas.”

The balm of Mecca, as already observed, in its genuine state, is held in the highest repute by the ladies of the East, by whom it is used to render the skin soft, white and smooth. They anoint their heads and face with it at night going to bed; the following morning minute scales are detached from the skin from every part in which this precious balm has operated. This renovation of the skin renders it incomparably white and delicate. The Egyptian females use it in a different manner. The dark color of their complexion, it is true, requires a stronger dose. It is at the bath that they anoint themselves with this balm.

They remain in the bath till they are very warm; they then anoint their face and neck, not slightly, like the women of the East, but wit an ample and copious ablution, rubbing themselves till the skin has absorbed the whole. They then remain in the bath till the skin is perfectly dry; after which they remain three days with the face and neck impregnated with the balm ; on the third day they again repair to the bath, and go through the same process. This operation is repeated “several times, for the space of a month, during which time they abstain from wiping the skin.

The European ladies who have an opportunity of procuring the genuine balm are more frugal of it. They seldom use it pure, but mix it with other similar substances, and compose a cosmetic balm which is thought to possess considerable efficacy in preserving the beauty of the skin. A good composition of this kind is the following : — Take equal parts of balm of Mecca and oil of sweet
almonds, recently extracted. Mix these drugs carefully in a glass mortar till they form a kind of ointment; to three drachms of which, previously put into a matrass, pour six ounces of spirits of wine. Let it distil till a sufficient tincture be extracted; when this is done, let it be separated from the oil, and put one ounce of it into eight ounces of the flower of beanwater, or other water of a similar kind, and an excellent milky cosmetic will soon be formed.

Obs. Others make a kind of virgin-milk. For this purpose it is sufficient to dissolve the balm of Mecca in spirits of wine or Hungary water; then put a few drops of this solution into Hungary water.

Notwithstanding the great reputation of the balm of Mecca, it has been deemed by some as dangerous and injurious. Lady Mary Wortley Montague describes it as having agreed very ill with her. In one of her letters from Belgrade, near Constantinople, to a female friend in London, she writes as follows: “As to the balm of Mecca, I will certainly send you some; but it is not so easily got as you suppose it, and I cannot in conscience advise you to make use of it. I know not how it comes to have such universal applause. All the ladies of my acquaintance at London and Vienna have begged me to send pots of it to them. I have had a present of a small quantity (which I assure you is very valuable) of the best sort, and with great joy applied it to my face, expecting some wonderful effect to my advantage.

The next morning, the change indeed was wonderful; my face was swelled to a very extraordfaiary size, and all over as red as my lady H ‘s. It remained in this tormentable state three days, during which you may be sure I passed my time very ill. I believed it never would be otherwise; and to add to my misfortune, Mr. W reproached my adventure without ceasing. However, my face is since in status quo; nay, I am told by the ladies here that it is much mended by the operation, which I confess I cannot perceive in my looking-glass. Indeed, if one was to form an opinion of this balm from their faces, one should think very well of it. They all make use of it, and have the loveliest bloom in the world. For my part I never intend to endure the pain of it again; let my complexion take its natural course, and decay in its own due time.”

Obs. It cannot be denied, notwithstanding the inconvenience suffered by her ladyship, which might be attributable to a variety of causes, that the balm of Mecca is used with advantage by the most beautiful women, and that the Turkish ladies, who all make use
of it, have, as her ladyship justly remarks, the loveliest bloom in the world.

The following method has been pointed out by a person who resided at Constantinople, to detect the spurious from the genuine balsam of Mecca. — Pour a drop into water of the genuine balm; and put into this drop an iron knitting needle. If the whole of the drop of balm adhere to the needle, it proves that it has not been adulterated.

Further reading:
The Toilette Of Health, Beauty, And Fashion

Tags:balm of mecca, beauty and fashion