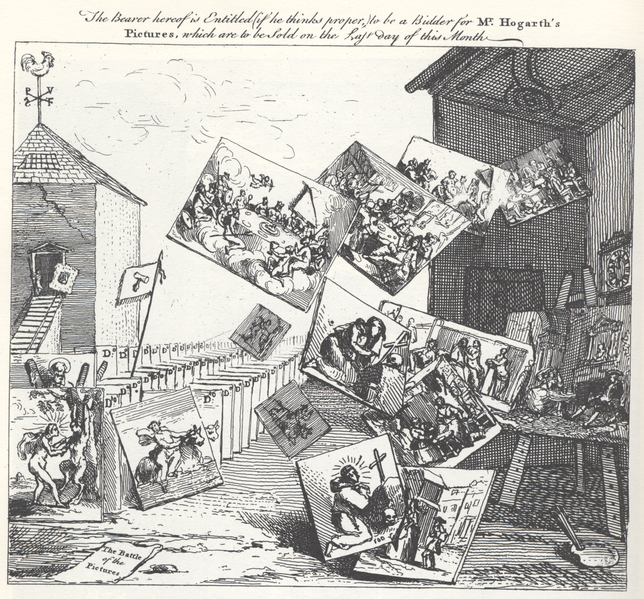 William Hogarth originally engraved “The Battle of the Pictures” as a bidder’s ticket for an auction of his paintings, which included sets such as A Harlot’s Progress, A Rake’s Progress and The Four Times of the Day. But the work also represents a scathing commentary on the action houses of his time, and the unethical ways in which they conducted their business.

Thomas Clerk, in his Works Of William Hogarth, explains the print thus:

On the right of the plate we observe an auction-room, on the top of which is a weather-cock, which has been thought to allude to Cock the auctioneer, with whom our artist was, at one time, not on very friendly terms. At the door is stationed a porter, with a huge stall“ in his hand; and, by way of a shewboard, a highly-finished head (after the Flemish school) is exhibited in a clumsy carved frame. Instead of the ordinary insignia of a sale (a catalogue and piece of carpet,) we here have at the end of a long pole an unfurled standard, blazoned with the auctioneer’s arms, “the fate deciding hammer”.

Beneath, an Apollo (whose godship is discernible only by the rays around his brow) is flaying Marsyas the satyr, who seems to undergo the operation with perfect indifference. Behind this stands a picture of St. Andrew on the cross, with a vast number of fac-similes arranged in goodly order; and by the saint’s side is a host of Jupiters and Europas, disposed in a similar manner. These are all marshalled in battle array, as the unquestionable productions of the great Italian masters; although it is more than probable that some at least of these genuine originals were painted by their disciples.

On the left of the print, we behold a number of pictures in hostile array. We begin with the founder of the order of Franciscans. The corner of the holy saint’s picture is driven through Hogarth’s Morning; a weeping Madona is forcing her passage through the third scene of the Harlot’s Progress; while the Aldobrandini marriage breaks into the splendid saloon of the disgusted couple in the second scene of Marriage-a-la-mode. Thus far the contest is favourable to the old masters. The aerial conflict, however, terminates differently. The riotous scene in the Rake’s Progress (No 3) very unceremoniously perforates Titian’s Feast of Olympus; and Midnight Modern Conversation penetrates a Bacchanaliau of Rubens.

David Bindman, in his Hogarth and his Times, further explains the unethical business practices of the time:

A witty reprise of the literary conflict between Ancients and Moderns, here shown as a battle of pictures rather than books. […] The elaborate system of advanced bids was in itself a criticism of the doubtful practices of auctioning Old Master paintings, and an attempt to find a way of marketing modern paintings. Hogarth distances himself from the taste for old paintings, claiming his own paintings to be contemporary equivalents of earlier types. […]The ranks of the Old Master paintings on the left suggest the mass production of dubious Old Masters for ignorant Connoisseurs and the essential speciousness of the market presided over by auctioneers such as Christopher Cock and dealers such as Robert Bragge.