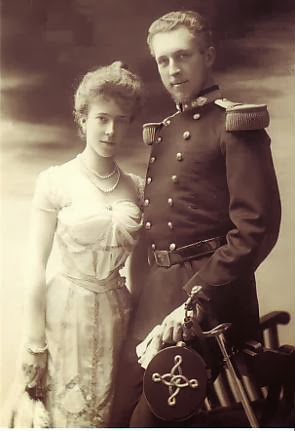 In 1919, King Albert I of Belgium, his wife Queen Elizabeth, and their son Crown Prince Leopold, boarded the “George Washington” ship. They were going to the United States for a state visit. Pierre Goemare, who travelled with the royal family, left us a first-hand account of their journey.

As has often been said before, the King expresses himself with great deliberation, but his choice of words is extremely judicious. He knows the proper word; his sentences are so regularly constructed that they could be written as well as spoken. One is aware of a remarkable power of attention on the part of our Sovereign. Whether he is talking with two or with ten people, he follows each individual’s opinions carefully and discerns their exact shades. He looks at the speaker with his blue eyes in a way which is singularly keen and penetrating without being aggressive. As his conversation shows great erudition, the conclusions which he draws reveal uncommon intellectual power.

The life of the royal guests on board the “George Washington” was simple and quiet. The captain of the ship had attached a gunner of the marines to the King’s person as well as to that of the Queen and Prince. These marines were ordered to follow the august passengers wherever they went, keeping five feet behind them. The very first hour the King asked to be freed from this pomp which was doubtless very ornamental but entirely superfluous to a sovereign who has not the traits of a Hohenzollern. The Queen expressed the same desire. As for the Prince, whom we wanted to nickname the little Prince of Melancholy, he hardly seemed to have noticed the man who silently dogged his footsteps.

The King wore the undress uniform of a general. No braid, no trimmings distinguished him from the officers of his suite. This simplicity of appearance delighted the American officers, who also admired his fine physique. […] When the King was not reading, he would walk about the deck, wandering here and there like a mere idler, stopping to talk to anybody he happened to meet, whether officer or plain sailor. He frequently walked up and down alone, being fond of solitude.

The simplicity of dress which the American officers admired in our King was also apparent in the Queen. She always appeared dressed in white, wearing a woolen gown in the morning and a silk one in the evening. Her manner was always charming and unaffected. She smiled amiably at all whose glance met hers. It was Queen Elizabeth’s smile that won the hearts of the huge American crowds later. […] Queen Elizabeth showed a particular liking for the different games on board. Her skill at quoits was remarkable. It was a charming sight to see that little Queen, so light and slender in her white dress, clap her hands for joy over a successful shot. […]

Prince Leopold did not care much for the games. He watched them at a distance with the air of sadness which I have already noted. He is also a dreamer by nature like his father. Being rather tall for his eighteen years, he is at the awkward age at which a youth finds that it is difficult to know what to do with hands and feet. Timid by nature, he blushes easily. During audiences he observes his father’s attitude attentively. He is visibly anxious to learn the business of being a king. He shows himself desirous of an intimate knowledge of all matters, He walked all over the ship, from bow to stern, paying attention to everything with which he was unfamiliar. 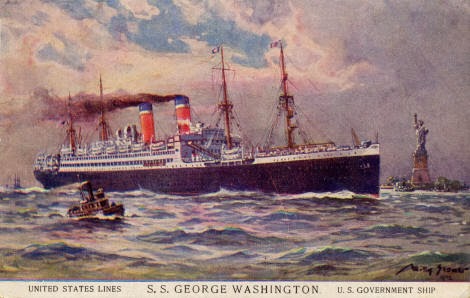 Goemaere described the George Washington ship as a “floating city”:

In addition to a store where all articles necessary to the toilet are sold, together with accessories such as cigars, cigarettes and candy, there are a tailor’s shop on board, a laundry, a dental parlor, and a drug-store, next to which is a hospital with a surgical room. Next to the post-office and the purser’s office is the hairdresser’s where three barbers are continually at work. […] The passengers were very much delighted when they got out of bed in the morning to receive their morning paper. It was the ship’s newspaper which came to us still damp from the press. This press provided the bills of fare, the programs of concerts and other entertainments, as well as the visiting-cards which were seen on the door of every cabin giving the names and titles of everybody on board from the King down.

The paper, called “The Hatchet” and having as its motto “I cannot tell a lie,” gets its news by wireless and tells its readers what is happening all over the world. The King and his suite were thus able to follow events in Belgium as well as in Italy. They read about d’Annunzio and Fiume, and the defeats of the Bolsheviks with the first rumors of the death of Lenin. Different subjects are also treated in “The Hatchet,” literary, historical and philosophical. […] Every night after din- ner there was a moving-picture performance in the great hall of the “George Washington.” […]

My meeting with this valet gave me the idea of undertaking a secret exploration through the apartments destined for Their Majesties. I went hurriedly down into the heart of the ship. How elegant and luxurious was the suite which had been decorated for royalty! It consisted first of a private salon and dining-room. In the salon were musical instruments, books and portraits by American artists. Opposite the King’s bedroom was a study where, among other apparatus created by American ingenuity, I noticed a wireless telephone which carried three hundred miles.

The Queen’s apartment was more coquettish. There was a bedroom with mahogany wainscoting upholstered in old rose. All the furniture was of mahogany. There was also a pretty boudoir with furniture covered with red flowered tapestry. On the tables were electric lamps with shades decorated with painted flowers and branches. Among the masses of fresh flowers I noticed a special preponderance of red dahlias, particularly popular in America. The suite pre- pared for Prince Leopold was also charming and was finished in lemon-wood.

Further reading:
Across America With The King Of The Belgians by Pierre Goemaere