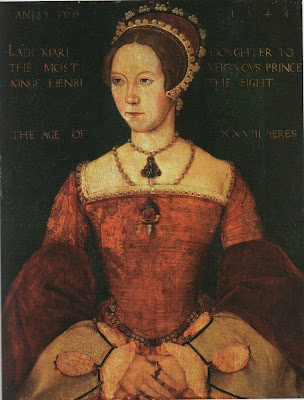 On 18 February 1516 , at 4:00 am, at the Palace of Placentia in Greenwich, Queen Catherine, holding in her hands the belt of Saint Catherine to ease the pain of a long labour and pray for a safe delivery, finally gave birth to a bouncing and healthy baby. This was the Queen’s sixth pregnancy and she must have been relieved that the baby was fine. But this relief was mixed with bitter disappointment for the sex of the baby: it was “just” a girl.

Still, it meant that Catherine and her husband, Henry VIII, were capable of conceiving a healthy baby and the couple hoped they would soon be blessed with sons. “Sons will come,” Henry said to the Venetian ambassador Giustinian, who had delayed to offer his congratulations because the baby was “only” a girl, “the queen and I are still young”. The baby, who “already showed signs that she had inherited the red-gold hair of both her parents and the clear Tudor complexion”*, was named Mary, after her father’s sister Mary Tudor.

Three days after her birth, Mary was baptized in the Church of the Observant Friars. Among her godparents were Cardinal Thomas Wolsey, her great-aunt the Countess of Devon, and the Duchess of Norfolk. Margaret Pole, the Countess of Salinsbury, stood sponsor at the baby’s confirmation, which took place just after the baptism. Margaret would be appointed Mary’s governess the following year. At the end of the ceremony, the heralds proclaimed: “God send and give long life unto the right high, right noble and excellent Princess Mary, Princess of England and daughter of our most dread sovereign lord the King’s Highness.”

Further reading:
The wives of Henry VIII by Antonia Fraser