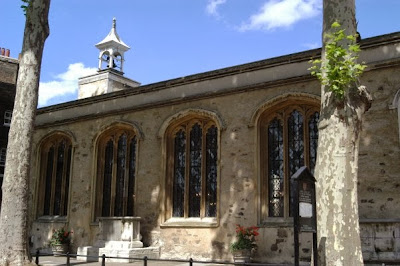 In my post “Anne Boleyn Places: Where She Lived, Where She Died“, I barely mentioned the Chapel of St Peter ad Vincula, where the unfortunate queen of England was buried. I think it’s time to remedy that and share a bit more about it, don’t you?

Anne Boleyn died, unjustly, as a traitor and was thus denied a proper burial with Christian service. Instead, after her death, her sobbing maids wrapped her head and body in a white cloth, took them to St Peter ad Vincula, the Tower Chapel, and placed her remains in an old elm chest which had once been used to store bow staves.

Although a chapel had been standing there since before the Norman conquest, the building in which Anne was buried, and which has survived to our days, was rebuilt in 1519-20 by Sir Richard Cholmondeley Anne isn’t the only queen buried there. In the following year, her cousin Catherine Howard and Jane Grey were executed at the Tower of London and laid to rest in its chapel too.

Over the century, it fell into disrepair until, finally, during the reign of Queen Victoria, restoration works began. During these works, the body of Anne Boleyn was found. It was identified by Dr Mouat, who described them thus:

The bones found in the place where Queen Anne Boleyn is said to have been buried are certainly those of a female in the prime of life, all perfectly consolidated and symmetrical, and belong to the same person.

The bones of the head indicate a well-formed round skull, with an intellectual forehead, straight orbital ridge, large eyes, oval face, and rather square full chin. The remains of the vertebrae, and the bones of the lower limbs, indicate a well-formed woman of middle height, with a short and slender neck. The ribs show depth and roundness of chest. The hand and feet bones indicate delicate and well-shaped hands and feet, with tapering fingers and a narrow foot.

Since then, there’s been some controversy over whether these bones were really Anne’s, but that’s a topic for another post. For know, suffice it to say that the Victorians dug where they expected to find her and Dr Mouat’s conclusions seem to fit in with what we know of Anne Boleyn. But we can’t tell for sure the bones are hers.

The Chapel can still be visited today but, because it is also a place of worship, you should either go after 4:30pm or visit it on a guided tour.