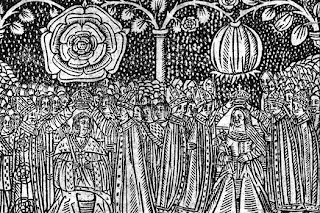 Henry VIII became King of England at the young age of 18. A few weeks later, on the 11th of June 1509 he married his brother’s widow, Catherine of Aragorn and, on the 24th, the couple was crowned at Westminster Abbey. Here’s how Tudor chronicler Edward Hall relates the event:

The following day being a Sunday, and also Midsummer’s Day, the noble prince with his queen left the palace for Westminster Abbey at the appointed hour. The barons of the Cinq Ports held canopies over the royal couple who trod on striped cloth of ray, which was immediately cut up by the crowd when they had entered the abbey. Inside, according to sacred tradition and ancient custom, his grace and the queen were anointed and crowned by the archbishop of Canterbury in the presence of other prelates of the realm and the nobility and a large number of civic dignitaries. The people were asked if they would take this most noble prince as their king and obey him. With great reverence, love and willingness they responded with the cry ‘Yea, Yea’.

When the ceremony was finished, the lords spiritual and temporal paid homage to the king and, with the queen’s permission, returned to Westminster Hall – each one beneath his canopy – where the lord marshal bearing his staff of office ushered all to their seats. Each noble and lord proceeded to his allotted place arranged earlier according to seniority. The nine-piece table being set with the king’s estate seated on the right and the queen’s estate on the left, the first course of the banquet was announced with a fanfare. At the sound the duke of Buckingham entered riding a huge charger covered with richly embroidered trappings, together with the lord steward mounted on a horse decked with cloth of gold. The two of them led in the banquet which was truly sumptuous, and as well as a great number of delicacies also included unusual heraldic devices and mottoes.

How can I describe the abundance of fine and delicate fare prepared for this magnificent and lordly feast, produced both abroad and in the many and various parts of this realm to which God has granted his bounty. Or indeed the exemplary execution of the service of the meal itself, the clean handling and distribution of the food and the efficient ordering of the courses, such that no person of any estate lacked for anything.

The following day the aforementioned defending team, lady Pallas’s scholars, presented themselves before the king ready for the tourney. All on horseback and armed from head to foot they each had one side of their armor-skirts and horse-trappings made of white velvet embroidered with gold roses and other devices, and the other made of green velvet embroidered with gold pomegranates. On their headpieces each wore a plume of gold damask.

At the same time the other side rode in, the aforementioned eight knights fully armed and dressed, like their mounts, in green satin embroidered with fine golden bramble branches. Following them, blowing horns, came a number of men dressed as foresters or gamekeepers in green cloth, with caps and hose to match, who arranged a set like a park with white and green fencing around it. Inside this paddock were fallow deer and artificial trees, bushes, ferns, and so forth. Once set up before the queen the paddock gates were unlocked and the deer ran out into the palace grounds. Greyhounds were then let loose which killed the deer, the bodies of which were then presented to the queen and the assembled ladies by the above-mentioned knights.

Crocheman, who had brought in the golden lance the previous day, then declared that his knights were the servants of the goddess Diana and whilst they had been indulging in their pastime of hunting had received news that lady Pallas’s knights had come into these parts to perform feats of arms. Thereupon they had left off the chase and come hither to encounter these nights and to fight with them for the love of the ladies.

He added that if lady Pallas’s knights vanquished them or forced them to leave the field of battle then they would receive the deer that had been killed and the greyhounds that slew them. But if Diana’s knights overpowers their opponents they were to be given the swords of those knights and nothing more.

Hearing this, the queen and her ladies asked the king for his advice on the matter. The king, thinking that perhaps there was some grudge between the two parties and believing that to grant the request might lead to some unpleasantness, decided not to consent to these terms. Instead, to defuse the situation, it was decided that both parties should fight the tourney but that only a limited number of strokes would be permitted.

This was done and the two sides then left the field. The jousts then came to an end and the prizes were awarded to each man according to his deserts.