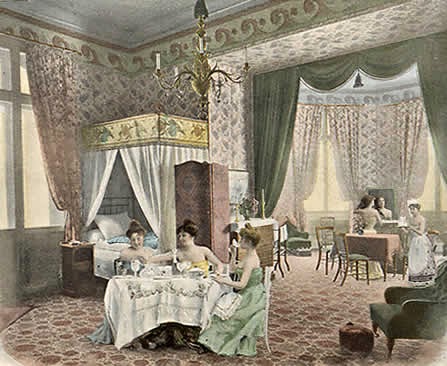 Living in London has always been expensive. Evangeline Holland, author of Edwardian Promenade, gives us an idea of just how expensive it was in the Edwardian era. To quote:

Life in London “chambers” has romantic associations with the old Inns of Court and ancient and somnolent city squares, where one can live in the atmosphere of dead memories and associations, features that tend to add considerable to the charm of London for the American. Usually “chambers” are to be had at a cheap rental, but also with a few attendant disadvantages. In the Adelphi Terrace, a little backwater just off the Strand that the flood of modernising which is sweeping over London threatens annually to blot out, one can still hope to find vacant “chambers” in a house decorated by the famous Adam Brothers.

From the windows of many of these houses one may look out over the Embankment Gardens and the foggy stretches of the Thames. The Royal Chapel of Savoy is a near neighbour, and ghosts, of Dickens’ characters float around every corner. On a winter’s day at four o’clock the muffin man, ringing his bell, still makes his round of the district. Muffins and crumpets for afternoon tea at twopence each are a pleasant interlude and quite in the spirit of this old-time atmosphere.

Hereabout one ought to be able to find five rooms, distributed over two unevenly laid floors, for five to six pounds a month, which is not out of proportion for such genuine historic associations as the rental includes. To discount this there will be a lack of water, hot and cold, except that which flows intermittently from an adapted kitchen sink, and your heat, what does not go up the chimney, is all radiated from grate fires. In these old buildings there are no elevators, no dumb waiters even, and coal, wood and everything else must be lugged up the front stairs, though plenty of willing hands are to be found, and at a small price, to do one’s fetching and carrying. Ashes and garbage must be carried down to a tiny, well-like courtyard, and within the week the dustman will come along to remove it, of course demanding a tip. You may ask why, but he couldn’t tell you if he would, except that it is in accordance with precedent, the thing that governs all walks of English life. The tenants collectively contribute towards the cost of the lighting of the front hall and of the keeping of it clean, the tenants of each floor attending to their own hall.