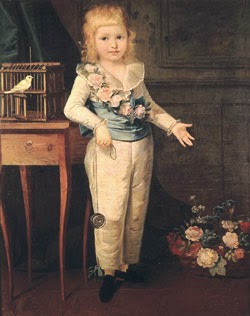 After the Duchess de Polignac had fled France at the beginning of the French Revolution, Marie Antoinette appointed the Marchioness de Tourze as governess to her children. “Madame,” said she, “I formerly intrusted my children to friendship; to-day I intrust them to virtue.” She then wrote her a letter in which she candidly and honestly described the character of her son, the dauphin Louis Charles, and her own principles and method of education:

My son is four years and four months old, all but two days. I say nothing of his size nor of his general appearance; it is only necessary to see him. His health has always been good, but even in his cradle we perceived that his nerves were very delicate…. This delicacy of his nerves is such that any noise to which he is not accustomed frightens him. For instance, he is afraid of dogs because he once heard one bark close to him; and I have never obliged him to see one, because I believe that, as his reason grows stronger, his fears will pass away. Like all children who are strong and healthy, he is very giddy, very volatile, and violent in his passions; but he is a good child, tender, and even caressing, when his giddiness does not run away with him.

He has a great sense of what is due to himself, which, if he be well managed, one may some day turn to his good. Till he is entirely at his ease with any one, he can restrain himself, and even stifle his impatience and his inclination to anger, in order to appear gentle and amiable. He is admirably faithful when once he has promised any thing, but he is very indiscreet; he is thoughtless in repeating any thing that he has heard; and often, without in the least intending to tell stories, he adds circumstances which his own imagination has put into his head. This is his greatest fault, and it is one for which he must be corrected.

However, taken altogether, I say again, he is a good child; and by treating him with allowance, and at the same time with firmness, which must be kept clear of severity, we shall always be able to do all that we can wish with him. But severity would revolt him, for he has a great deal of resolution for his age. To give you an instance: from his very earliest childhood the word pardon has always offended him. He will say and do all that you can wish when he is wrong, but as for the word pardon, he never pronounces it without tears and infinite difficulty.

I have always accustomed my children to have great confidence in me, and, when they have done wrong, to tell me themselves; and then, when I scold them, this enables me to appear pained and afflicted at what they have done rather than angry. I have accustomed them all to regard ‘yes’ or ‘no,’ once uttered by me, as irrevocable; but I always give them reasons for my decision, suitable to their ages, to prevent their thinking that my decision comes from ill-humor. My son can not read, and he is very slow at learning; but he is too giddy to apply. He has no pride in his heart, and I am very anxious that he should continue to feel so.

Our children always learn soon enough what they are. He is very fond of his sister, and has a good heart. Whenever any thing gives him pleasure, whether it be the going anywhere, or that any one gives him any thing, his first movement always is to ask that his sister may have the same. He is light-hearted by nature. It is necessary for his health that he should be a great deal in the open air; and I think it is better to let him play and work in the garden on the terrace, than to take him longer walks. The exercise which children take in running about and playing in the open air is much more healthy than forcing them to walk, which often makes their backs ache.