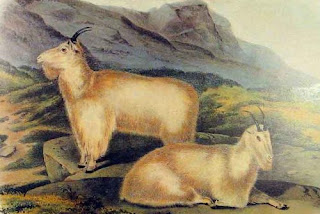 No, I’m not going crazy. These two weird events really happened, in Berkishire and Wales respectively, in 1810. Here’s how La Belle Assemblée magazine reported them:

Some thieves lately entered the gardens of a gentleman near Windsor, and took down a most beautiful and valuable statue of Venus de Medicis, made of copper, which they carried, however, only as far as another place in the garden where stood the statue of the Devil, at which they were so much affrighted, that they dropped the Venus, and made away as fast as they could, without any plunder at all. Thus, for once, the Devil stood the friend of beauty, and rescued her, by a look, out of the hand of her ravishers.

The late Rev. Rice Pritcharch, was for some time after his admission into the church, awfully ensnared by the sin of drunkenness; he was at length recovered from it in the following singular way; – He had a tame goat which was wont to follow him to the alehouse which he frequented; and he one day, by way of frolic, gave the poor animal so much ale that it became intoxicated. What particularly struck Mr. P. was, from that time, though the creature would follow him to the door, he never could get it to enter the house. – Revolving on this circumstance, Mr. P. was led to see how much the sin by which he had been enslaved, had sunk him beneath a beast, and from that time, he not only became a sober man, but an exemplary Christian, and a very eminent minister of the gospel.

Reality really is weirder than fiction sometimes, don’t you think?